This report of the goings on at the AFM in the days before the last general election makes grim reading.

Superficially this is about the government abusing of its incumbency to secure its re-election. Certainly as back-dated promotions and big fat cheques for arrears were being dished out, foremost on the government’s mind was exactly that: neutralising angry Labour supporters threatening to withhold their vote if their complaint is not met and in the process perhaps persuading – I suppose bribing would be the more accurate verb – some recalcitrant Nationalist to switch sides.

In the 33 days leading to an election, most politicians are not thinking too hard about national security and the esprit de corps of the armed forces. They’re thinking about what they must do to get elected.

Actually scratch that: the generalisation is unfair. Promoting half the army and finding time on election’s eve to adjust someone’s promotion for a slight that is supposed to have happened in 1996 is a level of tyrannical abuse not seen in this country since 1987. It is Labour politicians, whose indifference to common decency is pathological, who ignore precedents of self-restraint set up by consecutive Nationalist administrations, and fly us straight into the eighties. 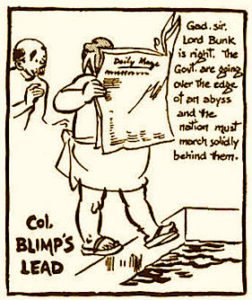 generals stopping for tea and sandwiches at 4 o’clock while the Zulu fall upon them. That this misguided and old-fashioned etiquette of behaviour in battle belongs to a Colonel Blimp who should be forced to retire as out of touch with the total war fought by the opponents.

That would be a bleak future indeed when the race to the bottom takes us to the point where every able bodied person is recruited on election’s eve to paint zebra crossings and trim the road verge and every soldier is promoted to major to make way for new loyalist corporals.

Because we need to dig an inch deeper than the superficial power of incumbency.

We have to ask ourselves what sort of armed forces we are paying for if the tribalism within it is so divisive and split down the middle that Meinrad Calleja’s father has to be brought back to exert vengeance on blue soldiers and reward red ones.

Do I need to remind anyone who Meinrad Calleja’s father is? He was army chief during the Fenech Adami administration when his daughter was caught delivering drugs for her drug lord brother. He was forced to resign and that started a nightmarish chain of events that would be deemed an exaggeration if penned by Mario Puzo.

That former army chief was brought in from retirement by this Labour administration to exert the most effective and bloody vengeance on anyone suspected of supporting the party that when in government had the temerity to force him to resign because he was powerless to do his job and prevent his own son’s international crimes.

Intentionally and cruelly a fresh set of grievances for the remaining half of the army that was not promoted in the 33 days leading up to the election has now been left to fester in an army without a mission and without a goal except the internecine hatred within its ranks.

We are now spending 50 million euro every year in pure recurrent expenditure to keep up our army. We keep it there just in case we ever need it. We do not expect them to line up to defend the country from invasion by a state actor enemy. That is not likely to happen. We expect them to watch our shores from people and drug smuggling, contraband and threats to the integrity of our borders and the seas within them. We expect them to step up in case of a natural disaster or a terrorist threat. We expect them to defend us from ourselves in case a conflict runs so deep that we need to be kept apart on a hot day.

If they fail us on the day we need them because of ineptitude and internal division, they will have betrayed us not only on that day but on every day before that: on every day we spent our tax money to keep them in place like an insurance that does not pay up on a justified claim.

That is the cause of restraint of those PN Colonel Blimps on the eve of elections who ban all promotions and the settling of scores during an electoral campaign. It is placing the interests of the party exactly where they belong: subservient to the interests of the country and its people.

Labour has been served well by the evisceration of our army. On an average peaceful day that has an imperceptible impact on the rest of us. But the whole point of having an army is to be ready for a day which is not so peaceful. For that day Labour is billing us, considerably, for a dead army.