In Westminster whips hand out to their party colleagues the agenda of the following week’s parliamentary business highlighting the expected ‘divisions’ or votes expected that week.

Not all votes are equally important. The ranking of the importance for the party is illustrated simply by how many times the agenda item is underlined. One line and the vote is considered of average importance. Two lines and you know everyone is watching. Three lines and you know that voting against party instructions will have severe consequences.

Obviously when government majorities are small, you’re likelier to find voting items underlined three times – ‘three line whips’ as they are called in the lingo. Small majority governments are less stable and more dependent on their MPs for survival first and to push through their agenda second.

The punishment for defying the whip, especially a three line whip, is not automatic but depending on the gravity usually involves suspension – in extreme cases permanent withdrawal – of the whip.

It is one of the ironies of the terminology that it is when an MP is naughty that the whip is withdrawn.

But we know what that means. An MP is delisted from the parliamentary party, excluded from its meetings, and disowned by their comrades. At least for a while. If the MP’s rebellion has not gone too far to ever be forgotten or forgiven, reconciliation may ensue and a common front rebuilt.

Has Edwin Vassallo gone too far? 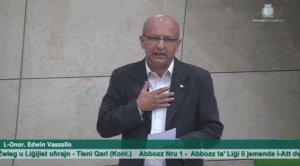 A rebellion is a rebellion and cannot go unremarked. If the party cannot exercise its whip on its MPs, then it simply is not a party and it does not serve a useful constitutional purpose except as a marketing agency in election time.

All the talk going round that a political party is undemocratic and is suppressing freedom for giving instructions to the parliamentary group on how to vote is disingenuous rhetoric or a betrayal of complete ignorance of the workings of parliamentary democracies.

Tonio Fenech will not have lasted long as Finance Minister if his party’s MPs where not whipped into supporting his budgets irrespective of whatever personal misgivings they may have had. A democracy cannot function without party discipline and cohesion.

But a back-bench rebellion of a government MP against his Finance Minister’s budget is defiance of a three line whip. The rebellion of a sole Opposition MP on a law enjoying cross-party support on grounds – as spurious as they may seem to the rest of us – of conscience and on a matter of controversy is an entirely different matter.

Edwin Vassallo is not alone in holding the views he holds. Though I do not share them, I feel some measure of dissent on a matter of this nature is actually more becoming of a functioning democracy than the image of unanimity that is democratically speaking rather unlikely, and certainly an innacurate reflection of the people’s mood.

I am not arguing that Vassallo’s rebellion was not an offence against parliamentary and party rules. It was. He is likely to be the first to admit he’s guilty as charged.

I think his punishment, however, should take into account mitigating circumstances that explain his behaviour if not justify it. There also is no reason to doubt Vassallo’s broad commitment to the PN and to his colleagues in Parliament on the basis of this isolated episode.

He is not a hero. But he is not the villain the gloaters out there are painting him as. After all it is not likely that they’re really after Vassallo’s head. What they’re looking for is the PN’s blood, and the gangrenous infection of an unnecessary amputation. Their thirst should go unquenched.

Previous:SmartCity: Developers almost say it how it is
Next:Dead Army