The witty title is not original. Credit to Lou Bondi writing some time in 1997 on the same Frank Portelli who was being a prick at the time.

Some things do not change. When a candidate for party leadership says idiotic things (see here a MaltaToday report of Frank Portelli’s notions) the reaction is not what you’d expect.

The candidate’s own party media treats him or her with kid gloves out of fear of being accused of favouritism. A forced neutrality sets 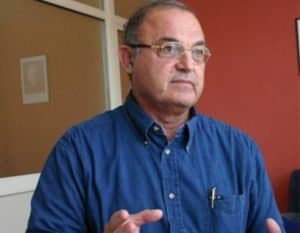 in a bit like those hosts of pre-electoral TVM transmissions that are paid not to laugh when Żaren tal-Ajkla breaks into song.

The opposing party also stays clear of any harsh criticism as it would wish for nothing better than a loon taking over the party it will need to compete with.

The rest of the media loses the bearings that the conventional lines taken by the two parties normally give it that guide it on what position not to take. So for the non-party affiliated media someone like Frank Portelli becomes a fringe embarrassment not worth coverage.

So Frank Portelli flirts with a disproportionate share of media coverage by being even more outrageous.

I have no idea if Portelli really thinks “80% of immigrants” (why not 70, why not 90?) should be repatriated. Nor if he has an explanation why the great majority of convicted Muslim thieves are not amputees. Nor whether he can explain why not all the migrants are having pitched street battles in Buġibba.

I would not put these notions past him and would not credit him for faking racism to galvanise a protest vote. Either way though, the fact that this rhetoric is now a revolting component of the political discourse of the PN leadership election is yet another layer of the bloody mess the party is in.

Racial hatred is not a legitimate and unsavoury symptom of an open and democratic process. This is the PN: which has a clear and explicit value system defined on the first page of its rule book. The dynamic integration of the catholic and the liberal streams within the party is in the central notion that the human being is at the centre of the value system and the political agenda of the PN. The human being, mind: not some fantastical notion of being ‘Maltese’, an alleged and inexistent ethnic pedigree that is presumably certified by the ability to swear profusely without stammering.

No one can be neutral on Frank Portelli’s notions.

For starters because I am under no delusion that there aren’t loons who share his views and who find in him the opportunity they long craved for to foist their irrational hatreds on the rest of us. Racial hatred has never been given space in the official policy of the PN and it should not start now.

Secondly because not confronting the issues he raises is no way of dealing with them.

A party with the human being at the centre of its politics must have migration at the heart of its program. It should be speaking about the issues of ghettoization and social exclusion that we are facing and how to address them. How to use democratic enfranchisement to include relative new comers to our community, to ensure their participation and contribution to the wellbeing of all.

Frank Portelli can say he “does not agree with multiculturalism” until he is blue in the face. Our country is changing and a misguided nostalgia for a mythical past where we could all swear in the same language is the biggest political act of missing the point since the Munich Conference.

In place of equating Islam with the chopping of thieving hands – which is as an ignorant, anachronistic and intentionally abusive misconception as the idea that catholics burn witches at the stake – PN leadership candidates should be telling us how our schools will be teaching children to appreciate differences and live together as citizens of an open, hospitable and fair society.

It is not just Muslim children who have it tough in our schools. Atheists, as my children are, are seen as moral amputees in a society that conflates ethics with faith. Atheism is a difference that is not immediately picked up. Think of the complications of life for children with a diverse ethnic heritage.

Deporting immigrants is not only reprehensible on moral grounds, it is economically counter-productive: frankly destructive to our growth prospects as we despair for more labour resources and a wider pool of fiscal contributors.

In place of equating immigration with a drunken brawl in Buġibba – which is a collective slander that transforms an ordinary incident into an original sin – PN leadership candidates should be telling us how they will stop the inhuman exploitation of labour that we are only getting a hint of in the little news that leaks out through the language barrier and racial prejudice.

Like slave owners of the American south or Hitler’s willing executioners too many of us agree that basic rights are not extended to all humans but limited to local proficient swearers. Illegal employment of visiting Europeans in the catering industry is rampant with basic coverage for rest and sickness suspended. The exploitation of black men in heavier, dirtier industries, is un-catholic, illiberal: the opposite of anything the PN in theory stands for.

On second thought, let’s not be Frank.