No such thing as a barred vote

By Manuel Delia2017-07-09T21:49:55+02:00Sat, 1st Jul '17, 18:06|0 Comments
Precisely as Joseph Muscat intended it to be, the gender equality vote is proving to be a dusty hairball in the PN parliamentary group’s collective throat. This sort of thing tends to happen with weak leadership. Right now the PN is led by a lame duck with its guts flowing out of its mid-action seppuku.  Leaderless, rudderless, the little egos with big ideas are let loose and everyone thinks they can do what they like.

Because, you know, they can.

A Parliamentarian is always free to cast their vote in Parliament exactly where they wish it to be. They are elected to their seat in their own right as individuals and their voting power is their own. They group themselves into parties to coordinate their voting behaviour because if everyone fended for themselves each time a vote came up, no view but the government’s – cohesive by definition – could ever prevail.

In theory governments go to Parliaments begging bowl in hand because only the latter have the power to vote moneys for the government to spend or to write laws the government needs to deliver its policies.

The default position of Parliaments – again in theory – is in opposition to governments’ positions. It is for the latter to make their case and seek support. Obviously if in practice things were so tough we would freeze in perpetual uncertainty. So a practical compromise is to make sure governments enjoy the support of a majority in Parliament that is likely to support their government in all but very rare cases of principle. If the majority is lost, the government quits.

But to retain the critical mission of Parliament to scrutinise without deference the government’s policies and practices, the role of the minority is sacred. Voting cohesiveness in the opposition is of secondary importance. The minority needs to poke at the holes in the government’s proposals, expose them, point them out and criticise them as loudly as it can and as constructively as the mood takes it.

A unanimous Parliament is only found in Soviet systems, like the Chinese People’s Chamber were everyone claps or they’re shot. No free votes there.

It is the Opposition’s duty to oppose. If it doesn’t, it fails its oath to act in the interest of the republic without fear or favour.

There is plenty of that around.

There are reasons why I am not conservative on social issues. I’m a live and let live person. Don’t get me wrong, I’m as moral as the next guy. I just don’t think that a man marrying a man or a woman a woman is a moral question. Moral is about right and wrong. What can be wrong about people choosing who to be married to?

I find it personally very difficult to understand the objections of the objectors. I would of course find it morally reprehensible if this meant that men would only be allowed to marry men and not women if they chose to. I feel my personal freedoms would be rather prejudiced in that case and that’s not nice.

I say I find it difficult to understand the objections of the objectors. But I will throw myself in front of any bullet shot at them to suppress their right to object.

As Parliamentarians they are entrusted with the power to exercise their views one way or another. Of course they have to assume responsibility for the consequences of their choice. In this case there’s a list of consequences to think of.

They will cause embarrassment to their party that will continue to be seen as incoherent and unable to find common ground on social issues.

They will cement the anger of an organised portion of our community that remains perplexed that a party of social inclusion that is the only one in the country that proudly and prominently includes homosexuals and transsexuals in its leading ranks seems unable to meet their aspirations.

They will complicate the choice of a new leader for the party as they will force candidates to identify with either faction as a result of which there will be winners and losers at the end of the process. And losers leave.

They will disown the electoral program the party ran with in the last election, betraying the weakness of the process of drawing it up and approving it: making it a personal manifesto of the defeated Simon Busuttil rather than a contract between party and people that remains binding irrespective of the outcome of the election.

They will germinate an inevitable and growing popular doubt in the credibility of the party’s next electoral program, whatever it promises, since PN MPs feel they have a right to opt out of their party’s commitments and exercise their personal right to vote.

There is one thing they will not achieve if they exercise their right to a free vote.

They will not stop the law from passing.

I would never ask an MP to act in a way that besmirches their conscience. But I have not heard a single argument that tells me how marriage equality does this.

There is an inherent contradiction in the point I am making here. I argue it is the Opposition’s duty to oppose. And I argue that opposing the marriage equality law is damaging to the PN without making a smidgen of a difference to the outcome.

I was reminded by a friend recently of Jed Bartlett’s winning intervention at the TV debate for his second term election. “Every once in a while, there’s a day with an absolute right and an absolute wrong, but those days almost always include body counts. Other than that, there aren’t very many unnuanced moments in leading a country that’s way too big for ten words. I’m the President of the United States, not the President of the people who agree with me. And by the way, if the left has a problem with that, they should vote for somebody else.”

And this time it is the right that has to put up with the fact that even if they may feel they are merely exercising their duty to oppose and their right to do so freely, this too is a nuanced situation which demands that the party is not put in greater, pointless harm. 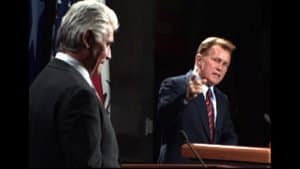