Pietru Pawl Busuttil: Reflecting on the life of an exemplary public servant

By Manuel Delia2017-07-09T21:49:56+02:00Fri, 30th Jun '17, 17:24|0 Comments
In 1986 the state accused an innocent man — then of the same age I am now — of the murder of another man he did not know. The first innocent man was framed by the police who planted the murder weapon in his farm because the police were protecting the real murderers. The real murderers were part of a militia organised by the state as a death squad to terrorise political opponents of the regime.

The state-sponsored terror did not stop at killing innocent people for the political crime of having a beer at a village political club of the opposition party. It also went as far as pinning their killing on a farmer who minded his own business and had never hurt a fly.

Pietru Pawl Busuttil was arrested and accused of a murder he did not commit. When his feet gave way and collapsed under the pressure of uniformed intimidation, it was not just because of his indignation at a false accusation. It was also because he was being arrested and detained in a police building were other innocent victims were known to have been murdered by the police and their bodies thrown off bridges in the middle of the night.

He was scared for his life. And presciently so because when in hospital an attempt on his life was contrived to look like a suicide. Fortunately his courage in the face of impossible odds saved him that day.

He repaid the foulest crimes a state can perpetrate against one of its citizens – the unjust deprivation of his freedom, his right to justice, even his life if the state could manage it as it had with others – by serving his country for 18 years as the mayor of his village.

When Pietru Pawl Busuttil was facing the trial of his life I was a 10 year old, unaware of his existence. I got to know him in his later life when in 2000-2003 I served as the government’s policy manager for local councils. I got to know him as a man of service, dedicated to his country, excelling in making the lives of his 500 or so neighbours by giving them a cleaner, prettier, more efficiently run village.

He worked indefatigably and his 67 peers around the country recognised him as a model public servant and locally elected official. While he ran for Safi elections, a Labour-majority village elected a PN candidate as its Mayor not out of guilt for the crimes the state had perpetrated on him on their behalf but because they benefited from Busuttil’s heroic service.

Since the last election many people asked how they could help the PN. Pietru Pawl Busuttil teaches us the answer to that by his example of a life of service which we celebrated at his funeral today.

Ask what you can do for your country.

After his country tried to kill him, Pietru Pawl joined his village PN committee. He helped his party in his village party section. He campaigned with his neighbours and he campaigned for them. He understood their woes and saw how he could make their lives easier. He served them as their councillor and mayor and gave what strength those rotten policemen had not ripped away from him in 1987 to a life of service and commitment.

Now. Go look up your PN section secretary. I guarantee you there are empty seats in your local committee that you can be co-opted to by next week. I’m doing so with my Mqabba section committees next week as well. There you’ll find out how you can get useful. Do small things. Give all the time you can. Expect no gratitude, no privileges, no favours. But think big. It is time for us to follow Busuttil’s example. We don’t all have to survive state-dispatched thugs trying to throw us out of hospital windows to our death. But we can all serve our country as he did with love, loyalty and commitment. 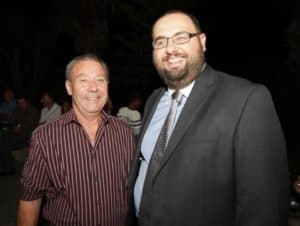 Previous:The race ahead
Next:No such thing as a barred vote