It was a very disappointed prime minister yesterday who stood up to face an Opposition that proved to be not quite as gullible as he thought they would be. It is clear the PM did not give incredible deadlines to his team to write, present and get the gender equality law squeezed between a June election and the summer recess simply to have Edwin Vassallo exposed to criticism Edwin would not flinch at if it was packed in newspapers and delivered to him with dead, stinking fish. Muscat hoped for much more political damage for the PN than a handful of protesters exercising their democratic right of objecting to a law they disagree with.

Muscat’s plan was to disrupt the PN’s leadership election altogether. He aimed to split the PN along classic left-right lines and to do so irreparably given the rare opportunity to cause harm while the PN’s leadership is in the early stages of a complicated transition.

He wanted ‘conservative’ and ‘liberal’ leadership candidates to pronounce themselves ideologically in contrast with each other. He hoped that would divide the PN making the leadership election more than a choice of leader but rather a choice of supremacy of a narrow ideological framework discarding the losing side.

Edwin Vassallo is not a leadership candidate. He is 1 of 67 members who alone stood up and felt so strongly about the argument on the agenda that he felt he had to risk his entire political future to make the point he wanted to make. Now I don’t agree with Edwin Vassallo’s arguments that the Marriage Equality law that passed its second reading yesterday was morally wrong, or frankly even morally problematic. Nor do I agree with Edwin Vassallo’s actions in that he used a political tool of last resort – a backbench rebellion – on an issue that did not deserve it. I would have agreed with him if he said it was poorly written, but that’s by the by.

But I respect the courage of his convictions however misguided I feel they are. And it is horrifying that we seem to forget that his arguments represented the broad national consensus 10 or 20 years ago and had been the broad consensus for several centuries before that. It is miraculous that the consensus has shifted so radically and so quickly.

Credit needs to go to gay and lesbian activists who first made their case publicly at a time when guilt, shame, humiliation and derision where a fact of life for a homosexual. They stood alone and faced the country down and their courage and their pride silenced an entire nation.

Credit needs to go to homosexuals who were leaders in our community and used the examples of their personal lives to teach this often intolerant community to stop confusing orientation with perversion. In particular we should acknowledge politicians (significantly all and only in the PN) who came out in spite of the conventional view that homosexuality and political success are a contradiction.

Credit needs to go to the Labour administration that adopted these policies as law even though it appears to have done nothing to overcome the homophobia and the anti-gay discrimination in its own affairs as a party. It is difficult to get over the exploitation of token young and attractive gay men (in the same way it exploits token dolled-up women chosen for appearance rather than anything else) for publicity purposes. But it would be obtuse not to acknowledge that the effect of the improved gay rights over the last 5 years was to largely take the subject out of doubt and dispute.

There is still a sizeable portion of our population who has reservations about the step the country is taking with regards to marriage equality and derision, insults and a phobia of Catholicism is both an unjust and an ineffective way of dealing with their views. For them too there has to be compassion and understanding. They too are entitled to dignity and respect. And there must be fairness in our disagreement.

But Parliaments and governments must legislate for the greater good and the PN yesterday stepped up. Some of its members may have been late to the party and some may have been less enthusiastic at first. But what Joseph Muscat did not expect yesterday was the response he received from a number of Opposition spokesmen he assumed would contrast with the human and enlightened interventions of Mario De Marco and Karl Gouder.

Joseph Muscat hoped Claudio Grech would stand up and deliver Edwin Vassallo’s speech. Joseph Muscat banked on Beppe Fenech Adami standing in Parliament and break ranks with the rest of the leadership tearing apart the PN and clearing the way ahead for the PM to govern over a disunited opposition.

In appealing for a broad view of the issues, the inclusion of arguments, the consideration of dissent, Claudio Grech threw a bright light on the authoritarian goose-stepping of a government that is not merely convinced it is always right but confident everyone else is always wrong.

Beppe Fenech Adami’s speech is truly memorable and when this historic law (however poorly drafted) is remembered by the chroniclers who will review this debate, his intervention will be the highlight of that story. Edwin Vassallo’s gesture and Joseph Muscat’s disappointed wailing will be footnotes to Fenech Adami’s brilliant apology.

Because Beppe Fenech Adami delivered the conservative, catholic, and yet eminently secular and democratic summing up of why marriage equality is the right thing to do. This was not an admission of defeat: that the PN is overwhelmed by the support enjoyed by the government. This was a statement that the PN has been persuaded to support marriage equality by the personal experiences of those who suffered for being denied it.

That it took the party time to understand why it was time to change a centuries old legal framework. But that its decisions and its reasoning are never governed by trends and polls and seasonal flavours. The PN is rather guided by the timeless values of love, compassion and understanding. That the dignity of every person is the supreme consideration.

That being conservative or being inspired by Christian values does not make you reactionary and opposed to change. But that change must be grounded in the needs of people and the aspirations for a full and happy life.

That taking inspiration from Christianity in politics does not make you a mouthpiece of the Church. If that’s what you wanted to be you should have joined the Church.

That paradoxically it is the Christian inspiration of tolerance, understanding and human compassion that makes the case of marriage equality rather than the liberal bias towards uniformity at any cost.

Speaking for myself I have been an atheist for as long as I could make that choice. But I am inspired by a politics that wants to make changes in the legal framework that is relevant for our times and aware of our needs; that people, whoever they are, come first.

Beppe Fenech Adami yesterday represented the synthesis and the logical coherence of the coalition that is the PN. For those, even the party’s supporters, who think the PN exists in a constant state of strife between liberals and conservatives, yesterday’s speech by the Deputy Leader showed just how erroneous this misconception is. Sure people have biases. And sure some occasionally feel unhappy with the balanced view and break ranks to make their point as Edwin Vassallo felt the need to do yesterday.

But ultimately this is the party of old fashioned good sense. It may not always know the way to win but with a little mind and a little heart it finds its way to the right thing.

Yesterday’s winners are not Muscat, Vassallo, Grech, Fenech Adami and the other Parliamentary protagonists. The winners are the people who will have the reality of their identity finally formally recognised by the law of the land. The rest of us owe you an apology for taking so long to recognise you and respect you for who you are.

And some of us – the pm first and foremost – owe you an apology for using you as a political football to score goals in a game that has nothing to do with your rights. That, I doubt you’re going to get. 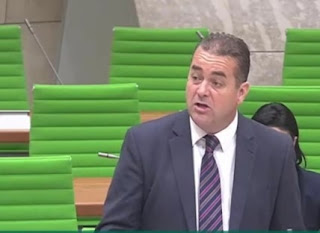