The SmartCity developers are seeking approval to change the Master Plan approved in 2007 on which the whole development is supposed to be based. They are looking to get approval for denser residential development with taller buildings abutting the shoreline.

I am not going to make an environmental argument. For one I should expect many others would argue it better though we are all used to the fact that in times of Labour, green lobbies tend to be more timid. The second reason is perhaps that I’m not too fussed about building heights where development is happening anyway and where it’s replacing the industrial horror that used to be there.

I do have some economic concerns though.

The original case for SmartCity was that it introduced to Malta the novel concept of a developed township where the combination of residencies, entertainment and business transcend the classical and rather dull business-park into a vibrant, living community.

Of course we already had this here. The attractiveness of Sliema and San Ġiljan for so many businesses is that in spite of their overwhelming density, noise and dust, the crushing pressure of traffic, and the long shadows cast by cranes, the area is a living, breathing city where one can work, play and sleep without moving all that much.

Smart City promised to be a new city with similar attractiveness but because it would be planned from scratch, it would avoid the organic chaos of the towns we inherited. 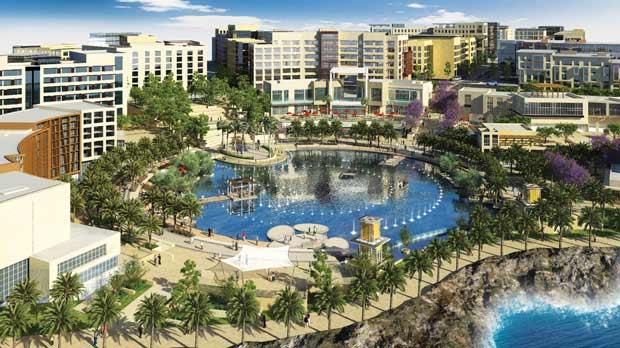 In the negotiations leading to the 2007 agreement that brought Smart City in, the township concept was not an end in itself from the government’s point of view. The objective was the creation of a hub that would attract companies to set up technology businesses here and employ the thousands of ICT trainees the country was churning. If to do this there needed to be a portion of residential and commercial development in order to improve the offer to relocating businesses then this was perceived as a necessary evil.

The government knew it would have a hard time justifying transferring public land to an overseas developer for residential development. Even the notion of transferring land to locals for that purpose had by then become very unfashionable. There were (and still are) concerns of over-development, of vacant properties, of urban degradation.

There were also unhappy experiences of precious public land being hogged and reserved by developments that remained on paper or did not go where it was meant to: Chambray, say, or Manoel Island.

And there was the idea that our economy was now entering a phase where dependence on property speculation with little regard to long term return and benefit was no longer sustainable.

In 2007, on the eve of the greatest financial crisis to hit the world since Charles Chaplin started wearing long trousers, Malta was mid-way through building the industries that sustain our living today: gaming, software, aviation, banking and pharmaceuticals.

Smart City was not your average speculative project. Residencies and commercial developments were in the background and clearly intended to support the business. There was focus on restricting density. Luxury developments would be in villas to allow for greater open space and not to interrupt the sea view for the real value developments: the office blocks. Apartments would not be an end in themselves and the focus would not be on luxury so that employees working in the township would be able to afford them and stay in the community without commuting to and from it.

A third of the site would be reserved for public open space to allow everyone to enjoy living and working by the sea and not repeat the Sliema mistake of burying in shadow anyone not living on the waterfront.

The phasing of the project was also structured to demonstrate the commitment to office development with office blocks going up before anything else.

That choice was commercially tough but politically necessary. The first office block to be built was a magnificent edifice surrounded by an enormous ground zero of levelled rubble. It was a single bloom in a desert of drought. Even as ICT businesses moved to Malta, they opted to stay away from Smart City because for a long time yet it would not be the township it promised to be on plan.

And now at last it is time for the residential development to start. And it looks like the heady ambitions of 2007 have now been discarded and sacrificed on the newly fashionable altar to the god of greed. It is not just a matter of taller buildings on the water-front. It is the fact that we seem to have abandoned the unique attractiveness of developing offices with a direct sea view in a development which should have primarily been focused on creating jobs.

The new emphasis on luxury means the apartments are likely to be sold to overseas investors who will stay in their apartments for little or no time at all. Out of the window goes the notion of cheaper apartments for people working at Smart City with enough money left to spend at the bars and restaurants there.

Yet to be seen, but there’s some speculation the government intends to withdraw or soften the obligation on the developers, imposed in 2007, to ensure a guaranteed number of ICT jobs developed on location.

These are all symptoms of the short-sighted quick-buck economic management of this country. In 2007 we looked for value added businesses that disseminated wealth among all people who would find well-paid jobs in the economy we were building. In 2017 we do away with that and cash in the millions from the construction of sale of apartments no one will live in.

This is asset stripping. It is a cashing out on the people’s assets today to create the illusion of wealth by making the 1% richer while reducing the prospects of future economic security of the remaining 99%.

We will have given up the land that belongs to the people for the speculation of billionaires we’ll never see.