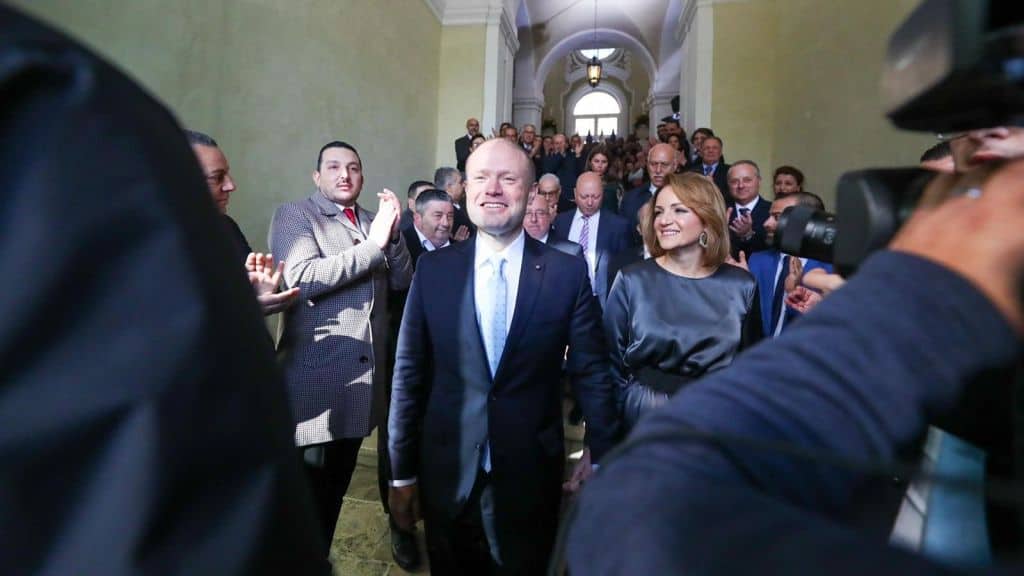 My wife, who is French, does not get British humour. As far as she’s concerned British humour is an oxymoron. It’s not just that she doesn’t laugh when Basil Fawlty goose-steps with his finger under his nose wearing a mock Hitler moustache, or that she doesn’t giggle when Derek Trotter nonchalantly rests on the upturned bar door and drops to the floor. She gets positively angry because I bend double in irrepressible delight and then it stops being about how funny British comedians are and we go into what’s wrong with me for finding the roast beefs so bloody funny.

I’m looking at Joseph Muscat now, unable to see the funny side of the joke he’s played on us today.

Seven months ago, he handed his resignation to the president. Strangely, the prime minister’s resignation letter was not published at the time. We wondered what all the secrecy was about. Why wouldn’t Joseph Muscat publish his side of the story? Why would he not want us to know what reasons he gave to quit before time? And what reasons could he possibly have for the president that he did not include in that December prime time movie he wrote, edited, directed and starred in which wasn’t really an apology as much as a self-appointed eulogy.

The curious detail of the missing resignation letter became a positive mystery when President George Vella refused to publish the letter, giving reasons that can at best be described as dramatic.

Oh look, our president has read Anna Karenina. He must have been delighted with the semantic acrobatics there. It’s a phrase pregnant with absorbing implication.

Oh yes, the president acknowledged, you may be interested to know what’s in the letter. But it’s not in your interest to know. See what he did there? Interest. Interest. Using the two meanings of the word in counterpoint. Worthy of a swan dying to Tchaikovsky.

And this wasn’t about something vulgar like ‘publishing’ a letter. This was about disclosing. My oh my. Disclosure. That word makes me think of Demi Moore. And when I think of Demi Moore I don’t usually think of much else. But if I go down that road I suspect my wife will have more reason to be annoyed than Del Boy could ever be blamed for.

So back to the big secret that President George Vella thought our ears were not strong enough to sustain: the box that needed to remain closed – as opposed to disclosed, I suppose – lest we go mad with the blinding knowledge of eternity that our puerile brains cannot contain.

Things became murkier and murkier. It was a bit like the Virgin whispering secrets into the ears of pre-pubescent farmhands, who then write down the apocalyptic visions they were entrusted with only to put them in a sealed envelope not to be opened before they become useless to everyone.

If you’re moderately offended by the comparison, consider Douglas Adams. In the distant future the most powerful computer ever made is discovered and people around the galaxy gather to think about how such a powerful brain could be put to use. Ask it for “the meaning of life, the universe and everything” someone hopefully suggests.

The computer is asked the question and replies that it would be computing … computing … computing. It does that until at one point, many years later, the big electronic brain announces it is about to produce an answer. Everyone, in the entire galaxy, waits anxiously for the biggest computer in the world to finish its marathon computation. Presently, the computer produces its answer: ‘42’.

In the awkward silence that follows, many struggle to remember what the question put to the computer had been.

This is the general feeling as Joseph Muscat published today, 7 months later, his letter of resignation saying he wanted to avoid speculation. He thinks he’s funny. There have been 7 months of speculation about whether our heads would explode if we ever accidentally stumbled on this piece of mindless esoterica. Freedom of information requests were turned down. President George Vella made a spectacle of jumping in front of this bullet that could have killed us all, protecting us from knowledge we could not withstand.

There was talk of potential instability of the national government, the one that replaced Joseph Muscat, not the one he led. There were whispers that at the sight of the letter people would rush to the streets, set up barricades and bring down the republic.

We were a hiss away from night strangling the travelling lamp. Mousing owls would hawk at and kill falcons. And horses, beauteous and swift, minions of their race, would turn wild in nature, break their stalls, fling out, contending ‘gainst obedience, as they would make war with mankind. ‘Tis said they’d eat each other.

Wasn’t that speculation enough for Joseph Muscat to publish his letter? He published it now ostensibly to avoid speculation by when we had practically lost interest?

There is the odd possibility that this is not the letter the president wanted hidden. That Joseph Muscat had written an earlier letter to the president in December 2019 with content of some significance and this January 2020 letter is just a formalistic ‘I’m so great but I’m still leaving’ Dear John letter by Joseph Muscat.

And then there is the odd possibility that President George Vella reasonably expected this poor excuse for a resignation letter by a disgraced prime minister would seem lacking in respect of the office of state he was leaving and might be annoying to outside observers. Speaking only for this outside observer, Joseph Muscat had so defiled the office he had sat in, had so besmirched the reputation of this poor country, had been such a poor example for future prime ministers by the time he wrote his resignation, that seeing his smug arse fall down the steps of Castille compensated by then the stupid smug grin he still had on his face as he crawled away from them. That resignation letter would have added to the motivation of protesters as much as a leaf of flat leaf parsley can improve your appetite when plonked on a bowl of vomit.

There’s also the possibility that George Vella and Joseph Muscat are having a laugh while we watch them with that burning, dim look my wife gives me while I’m next to her laughing uncontrollably at British comedy TV.