I was told on the one hand that I’m a hopeless idealist chasing unicorns and that the job requirements I listed for the job of PN leader were impossibly onerous and no one alive, no one but the second Messiah as someone put it to me, could meet them.

I was told I was putting up a tall order. Of course I was. Did you really think we could choose the next PN leader with a short one?

On the other hand for people who give me too much credit, the article was brilliant satire in a panglossian sort of way peppered with an intentional naiveté for literary effect.

Either way, whether intentional or not, the list of characteristics I suggested we should be seeking in the next PN leader is impossibly optimistic.

Allow me to persist in my error. I cannot accept the argument that what is needed to defeat Joseph Muscat is someone as crafty as him, willing to play dirty, a wise guy with a bigger gun. I am not just looking to replace Joseph Muscat. If my standards were that low, I’d be voting Labour.

I am looking to replace Eddie Fenech Adami, Lawrence Gonzi and yes, Simon Busuttil. Because even if he was never tested in the hot seat at Castille I stand by the decision of the PN grassroots to elect him leader for just the qualities the job needs.

True enough it was Simon Busuttil’s own decision to leave after losing this election. And many tried to dissuade him. But he is right that in this society of disposable plates and diapers, we seem incapable of rallying behind a leader who has lost an election. If earlier generations thought that way we would never have had the best years of George Borg Olivier and Eddie Fenech Adami – and to stretch the argument even Dom Mintoff – who all lost elections before being re-elected to their most historically significant years in office.

Can anyone seriously tell me which of the credentials I suggested the next PN leader should have are not really required?

PN Councillors and eventually card-carrying members have a very important job to do and it is important that they understand what that job really is. We are not choosing a Mourinho to help us win the league next year. We are choosing someone who has a grasp of what is wrong with our country today and has a clear vision of what it should look like in 20 years’ time and has a plan on how to get us there.

I find it incredible that when Fukuyama’s end of history notions have been thrown out of the window in the rest of the world, it is us in Malta who are now saying there are no longer major issues to deal with and politics is now reduced to a beauty contest of an over-rated debating society.

Of course we have major issues to address. But like all major issues they are too big for us to see and grasp and understand. When the PN first took up government after World War II it had barely survived its all but utter destruction when its leaders had been exiled and its existence deemed treasonous at the time of war. It came back from that brink building and preparing for our independence, a notion totally alien to the Maltese for 3,000 years and completely inconceivable in the midst of the rubble and devastation after the war.

No one understood the vision of independence in 1950. It seemed folly, a fiction, a dream no one could understand. And yet, 14 years later, the PN had brought it about. It took the imagination of George Borg Olivier, a 39 year old Prime Minister, to take us where no one now disagrees we should have gone.

When in 1977, Eddie Fenech Adami faced up to Mintoff’s hegemony he did not propose to outdo Labour with discrimination, violence, protectionism, cronyism and nepotism benefiting the Nationalists instead of the Labourites. When people were distracted by the impact that government was having on their lives, Eddie Fenech Adami was articulating his European vision. He was speaking of solidarity, subsidiarity and reconciliation to take on the monopolistic, authoritarian regime of those years.

Did anyone really completely understand what Eddie Fenech Adami had in mind for the country? Was anyone looking as far as 2004, as the new 44 year old leader was doing? These are rhetorical questions by the way. My argument is that the leaders that were chosen, were not selected because they reflected the mood of the time but because they projected a future way beyond the limitations of the moment.

They did not feel defeated by the insurmountable odds they were facing. True the PN is facing some tough days but does anyone with a little history seriously compare these days negatively with 1947 and 1977?

And the leaders that were chosen for those battles were not clones of the violent, corrupt, morally bankrupt rivals they were appointed to overcome. Quite the contrary, they were their opposites entirely.

There is a much bigger mission ahead. We need someone who has clear ideas of what Malta should be like in 2035 and has the foresight, the knowledge, the skills and the leadership to get us there. There where Joseph Muscat’s roadmap would long have run dry.

We need someone who transcends a society that thinks with a 140 character limit and throws its weight around facile notions valued by ‘Likes’ (for that has become a word) on Facebook. If we think we’re going to build our children’s future within 140 characters, we have truly lost the plot.

I have written many job descriptions and sat on many interviewing boards and selected many people for jobs. The people I recruited were always different than what I had imagined them to be or even thought that I wanted before I met them. No one is perfect and like all sinners I will not know the second Messiah when I see him. Or her.

But I know one thing for sure. When I write a job description I aim high. I describe the ideal candidate and list all the attributes I think they will need. The tougher the job I am recruiting for, the taller the order I will write.

Is there a tougher job within this country, than being its Prime Minister? I’ve seen that job up close and since I’m not happy with a shallow election-winner with a quick draw, willing to barter our future with his present, I know just how exceptional the occupant of that position should be. I’ve seen Eddie Fenech Adami and Lawrence Gonzi at work and I dare anyone to go through my list in yesterday’s piece and point out which of those qualities they did not have. Neither of them were a Messiah. Knowing them, they would have shuddered at the blasphemous notion.

But they were great at the job. Our job is to find their replacement and we must do this right. 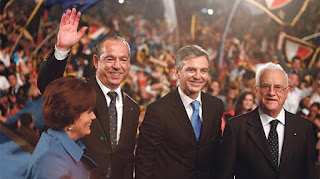