It’s a mantra repeated without fail but with much frustration by the party loyalists who will stick with the PN through thick and thin but who have a shared theory on why others would not. It’s that verb ‘qeda’ that is so loaded in the Maltese language.

There’s no more noble a way to define the true meaning of public utility: We must serve the people. For so we must. Careerists who are in politics for the gratification of their avaricious egos or worse to stuff their pockets give a bad name to those whose only wish is to be of service to their neighbours.
But ‘service’ is a poor and mindlessly optimistic translation of ‘qadja’ in the original Maltese. For the local speaker it demands an action quite above and beyond what the English translation would suggest.

The mission of the Nationalist Party has been to build a strong civil service that exists to deliver the program of the government of the day but not to be subsumed by it but rather to have its own ethos and to regulate itself to stay within the law even if their political masters might be tempted to overstep it.

The PN in government has built autonomous regulators to rule and enforce their interpretation of the law without resorting to the views on a case by case basis of their Minister, limiting the role of government to the design of policy without anyone particularly in mind and individual cases applications of that policy are then assessed by professionals who have no narrow political incentive to bend the rules.

The PN in government has also built or enabled independent institutions to keep it in check: a constitutional court to review any of its actions even if backed up by legislation; parliamentary committees with Opposition leadership to scrutinise its expenses; an Ombudsman with security of tenure with the brief to embarrass bad administration; regulators to rule on regulated activities even if a result of government initiative; elected local councils to create loci of power for municipal affairs administered, where the public so wishes, by people of a political conviction opposed to central government.

This institutional framework was consciously designed to remove the need of Ministers intervening ad hominem on behalf of constituents putting pressure on them. Rules are there for everyone and Ministers are effectively powerless to intervene in favour of anyone wanting to break them.

This was the modernisation of our country.

From opposition, Labour has worked ceaselessly to subvert this process of modernisation and it has responded to formal, detached macro policy-making, with informal, direct personal intervention and sabotage.

From opposition it mobilised its network of supporters employed within the regulators, the autonomous civil service, local councils and the institutions of the state to undermine the effort to remove the need of clientelism by creating a greater need of it.

Because it is in times of starvation, that the black marketer thrives.

The planning regulator strictly applied the rules, saying no any time an applicant departed from the rules. Ministers turned down requests to intervene saying they were, and being, powerless to do so. But people soon caught on the informal, albeit no less powerful, route of speaking to the right architect with the appropriate Labour connections within the regulator that could get you what you needed. The same happened consistently for people looking to leapfrog on others less connected to get hospital appointments, the odd lower ranking public sector job and other favours denied anyone by a PN government hell-bent on fairness and exploited by a Labour opposition intent on cementing its bond with a pjaċiri-seeking public.

Once in government, Labour re-institutionalised the small-time corruption, the PN has lost elections for working to eliminate. It undermined institutions designed to keep it in check by reducing their powers at law and by manning its management with cronies. It threw out policies restricting outside zone development or public sector recruitment.

The difference from its 1980s methods, is that Labour in government realised that by not discriminating against traditional Nationalist voters in dishing out these pjaċiri, they were actually recruiting a new loyal crowd. They actually went the other way targeting traditional PN voters and seeking them out.

Hundreds of people who spent decades under the PN administration trying to get one thing or another done for them which should not have been, had their problem solved by a Labour government. From their point of view the long term harm to the environment or to the economy that the favour they have been granted will cause is of no interest or concern. All that matters is they got what they believe was due to them.

The PN gets whacked both ways for doing the right thing. It is damned for saying no to people whose individual requests are harmful to the common good. And it is damned because no one seems to care the common good is anything to be concerned about. In this materialistic world Labour has projected on its bill-boards, you need only care for yourself.

What to do when faced by this Labour government? Does the PN argue that clientelism is evil and that the role of policy makers is to make policies rather than to say yes to anyone who asks in exchange of votes? Or does the PN race Labour to the bottom and convince itself it must stop being a kill-joy to the micro-aspirations of individuals in order to break free from perpetual banishment from government?

Those PN stalwarts who remind us that “ma naqdux in-nies” would probably advise we do away with a nuanced and philosophical approach to this challenge.

But in grasping the barely hidden undertones of what ‘qadja’ means, we must not lose sight of its superficial but unequivocal raw translation. What service would we be giving our people if we threw out the moral obligation of a government (and of a political party that wants to be one) to protect the interests of the many before chasing the needs of the few?

Why would people choose the PN, if it became Labour?

I agree. Irridu naqdu n-nies. We must serve our people. Now let’s make sure that means precisely what it says, not the abhorrent perversion Labour has made it. 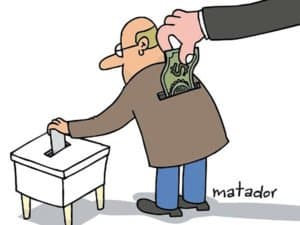