To the Labour voter who disapproves of corruption

By Manuel Delia2017-07-14T14:36:52+02:00Tue, 13th Jun '17, 16:15|4 Comments
This one goes out to people who voted Labour understanding, perhaps only privately, the seriousness of what had already been proven with respect to Konrad Mizzi, Keith Schembri and Brian Tonna.

You are a big, big, big chunk of the voting population. If 55% of our voting population is too obtuse, ill-informed, susceptible to have their vote bought by a useless beach cleaning job or a planning permit that bends the rules or too single-mindedly loyal to family tradition to have voted Labour WITHOUT taking into account the facts that emerged in the months and weeks leading up to the elections, we’d be a lunatic asylum with an airport. Which we most definitely are not.

You DO understand how serious these facts are but you weighed them against other considerations and in balance you still decided Labour was the best choice for yourselves and for your country.

I feel no anger towards you, no resentment, no disappointment. I may have been tempted to fall for one or more of those emotions in hotter times but life goes on and we must put disagreements behind us if we are to first seek what we do agree on and build on that.

You had your reasons to make your choice and that choice must be respected not only because it belongs to a majority but because in the case of each and every one of you it is a rational choice made by a citizen of this country on the basis of the information known to you.

This is especially true if you decided to vote Labour because you argued to yourself that since in your mind Labour and the PN are both tainted with corruption, you had to make your choice on the basis of altogether other considerations. In your special case, if you fit this description, you are clearly a person who feels very strongly about corruption and continue to punish the PN for the smaller misdemeanours of many years ago of former PN people who were thrown out of politics just as soon as they were found out.

I could never fault you for holding a grudge against corruption, however small. I feel exactly the same way.

But if you do, then you must now stand up to put pressure on the party and the government you have supported in this election, to take action to stamp out the despicable actions that have disgusted you, at least privately, as much as anyone else. By extension it must take action on the people who committed wrongdoing and on the people who failed to act when they were duty bound to do so. Justice must be done. You want this too.

If you don’t speak up now – when there is no risk to the party you support and to the government you have chosen – you are sending the corrupt that have embarrassed you the wrong signal altogether. You are telling them you’re fine with what they’ve done and that they can continue to do it with impunity. And we know you’re not fine.

Witness Edward Scicluna, conspicuous in his ominous silence right up to the election, lifting no finger in defence of his colleagues who sullied the reputation of the government he formed part of. Now he becomes so bold as to launch a terrifying witch-hunt of the civil servants who at great personal risk and in pursuit of no reward investigated, discovered and reported the findings that so rightly disgust you.

From an awkward silent witness, Scicluna has today become the inquisitor pursuivant going beyond the suppression of evidence to cover up crime and now turning on to the investigators themselves.

Support your government. Speak up and make them stop this. Tell them, publicly, that your support is conditional on basic decency including that they do not obstruct the process of justice to discover and act upon what has occurred and what continues to occur.

Your responsibility as a citizen of Malta did not stop when you cast your vote. Whether as critics or as supporters we all share the duty to hold our government to account. You need to live up to that duty too. 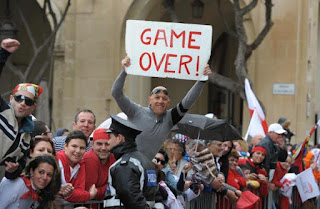