By Manuel Delia2017-07-14T14:28:19+02:00Wed, 7th Jun '17, 21:37|0 Comments
On 29th May I reacted to an editorial from l-orizzont that in the heat of an electoral campaign screamed for the heads of journalists who dared question the unstoppable greatness of Joseph Muscat and his Labour movement.
That was not one of the usual rants about how Daphne Caruana Galizia makes the Nationalists look bad because she’s rude and goes for the personal. This was an attack on the independent media — The Times, The Malta Independent, MaltaToday — because they were not toeing the regime’s line.
Today, when the election is well and truly over and as the Prime Minister switched on his standard post-polling rhetorical clamour for national unity, l-orizzont turned again to the independent press.
L-orizzont accuses journalists questioning the government, of treason and of being a spanner in the wheels of motion of the nation’s progress. These are words that are straight out of the manuals of the oppressive dictatorships of the 20th century. They are designed to reduce and mitigate criticism by a number of relatively effortless initiatives:
Firstly, it wants to intimidate the critics who must surely have lives outside their jobs, have husbands, wives, parents and children they need to take care of and take care of them. They push them to ask themselves the obvious question of why must they be the ones to face all this pressure for the little money that they make. Because you see it only starts with the angry words on l-orizzont. It continues with the angry taunts in the street when complete strangers in the street recognise you as an ‘enemy of the people’ and shout abuse at you.
Secondly, it wants to reduce the credibility of critics not only with your average loyal reader of l-orizzont but more importantly with discerning neutral readers who unconsciously box the government’s critics and the journalists who seek to uncover its affairs as motivated by a sinister opposition that is driven only by the greed to takeover power.
Thirdly, it wants to discourage anyone else from joining the effort to question, criticise and dig deep for the truth. The targets of l-orizzont are being made an example of as a deterrent for independent thinking and criticism in and of itself and anyone wanting to take it up.
It has been years now that people point to Daphne Caruana Galizia as one of the causes of the PN’s inability to win elections. Her supposed guilt has been attributed in turn to Lawrence Gonzi and Simon Busuttil and their resignation has been called for for even “allowing” her to be.
The defence that the PN does not own Caruana Galizia and can control her as much as it can the weather has been refuted.
My intuitive attitude in the face of even the harshest criticism, the sharpest satire, the most invasive investigation into the affairs of people in public life would be to defend freedom of speech in any and all forms. I would disagree with most things l-orizzont says but I would throw myself in front of a bullet in defence of its right to say them.
However what l-orizzont is repeating — on 29th May and again today — is not an exercise of its freedom of speech but an effort to suppress the freedom of speech of others. That is just not right. It is not acceptable in a democratic society. It is not acceptable especially when the words are from the editor of the official publication of a workers’ union that should for the right of free press be the first to shed its blood not rush to shut up others.
I therefore throw back to the Prime Minister and his lot the same challenge they keep coming up with. If it is true that you do not seek to be protected from the free exercise of press freedom in this country, you should publicly criticise l-orizzont’s call for them to be silenced.
If it is true that you wish for national unity, show that you hold dear the sacred and independent role of the free press to keep you in check. And in that case publicly admonish your sister General Workers’ Union and seek for the withdrawal of their officials call to terror on independent journalists.
If you don’t — and indeed you won’t — take no comfort dear Prime Minister from your recent election victory. For you will find an opposition unflinching in its duty, and unyielding in its capacity to fulfil it, to defend freedoms in Malta, particularly the freedom of independent journalists to hold all people in power, of whatever hue, to account.
The Free Press are our last line of defense. We will defend them. 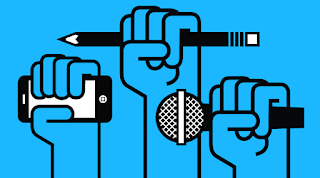