The Prime Minister we never had

By Manuel Delia2017-07-14T14:27:27+02:00Wed, 7th Jun '17, 07:27|11 Comments
Eulogies are for dead people so this is not one.
The party activists whose emotions had been pent up since 11am on Sunday had finally found the release and there wasn’t a dry eye in sight.
On Sunday afternoon at the counting hall there were many critical words whispered privately in the inner rooms where the ears of the red arm-banded trolls do not reach. Simon should have spoken publicly sooner to accept defeat. He should have come here to rally the troops. Eddie did this. Gonzi did that. Why is Simon AWOL?
I have no real idea what he was going through on Sunday afternoon though I suppose I can begin to imagine.
Yesterday, Simon Busuttil called the party activists for a meeting at the party headquarters. In his customary rolled up sleeves, polished look, and pale blue tie but with uncharacteristic pale grey pallor and welled up red eyes he stood in front of his fiercest supporters and toughest critics without a platform to exaggerate his height and without even an attempt to condition the room with stage management.
His wasn’t a happy audience. But it was clear it was not an angry one either. It was gutted, confused, disappointed but not angry.
Busuttil’s message resonated and moved the crowd to tears. In the entire speech he only briefly referred to the adversaries. His audience now was the home front and he wanted to remind them why they are PN supporters and why that’s a good thing even though the PN lost.
There’s something heroic about this PN failure. This was a Thermopylae; the PN’s own Alamo or Dunkirk. We stood in front of the tanks and they rolled over us. But we stood in front of the tanks and sometimes it’s not about winning but about being right.
Pride, dignity and self respect are more important than victory or power.
That message is a tough sell for any political leader on the first day of their opponent’s term. But this has been a very particular election of right or wrong.
Busuttil also sent some technical messages out to his audience that his adversary would have watched intently. There is nothing a newly confirmed prime minister enjoys more than a navel gazing opposition party, discouraged, disheartened and in disarray undergoing a chaotic management changeover. Especially a prime minister with a lot to hide who needs attention to be off him for a while.
Busuttil sent a message to the prime minister yesterday. We’re still here. I’m still here. If he stepped in in 2013 when the party was in far worse shape and when it appeared to have lost the support of the neutrals in the country, why should he run away now that just about anyone who’s not embarrassed to speak publicly and has no particular political affiliation considers his victorious adversary as bad news?
Busuttil is not going AWOL. He’s sticking around for the next months helping the party make rational choices for its future, rethinking its methods, studying and learning from its tactical and strategic errors, and polishing its positioning. He’s sticking around to make sure that while that happens the function of the Opposition to breathe down the neck of a government that is clearly up to no good is exercised diligently and fearlessly.
There’s still a job to be done and Busuttil is not running away from it. And the Nationalist activists yesterday felt the pride of having even in a Prime Minister they would not have once again chosen a Leader like those before him in living memory to live up to public duty before personal needs, that would not run away from adversity, that would sacrifice his own interests when the interests of his party, and more importantly his country are clearly better served by that sacrifice.
That is why we all shed a few tears yesterday. Not for our loss as a party because our glorious line of leaders has not been blotted. Not even for Simon’s loss as none of us, least of all him, consider office of state as some sort of reward which is now being denied him. We shed tears for Malta’s loss because we know this is what its prime ministers should look like.
This is not a eulogy. It is a note of regret for the country we love. 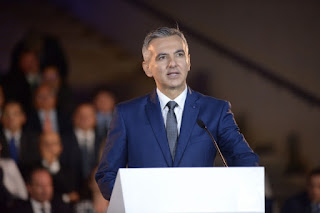