Q&A: Have leadership elections always been quite so rough?

I would like to ask a question that maybe you can answer through your experience in the party. Were previous elections for leadership so bitter or is this bickering being magnified through the availability and usage of social media? I would like to know from people who were present when Eddie Fenech Adami or Lawrence Gonzi were elected if such internal struggle existed and to what extent there are similarities to this one. Could it be that in those times people vented their disappointment with those physically around them and so the breaches in the party weren’t so apparent as these days? Or that the breaches, that every party experiences when an election for leader comes about because each candidate has his own group that aspires for posts if their candidate is elected, have been widened as nowadays people vent their opinion on social media and so breaches are harder to heal?

Every race has winners and losers. And losers are not uncorking champagne when they get the news. That’s not new. And the process of every race, especially for a position with stakes as high as the top job in the PN, is a bruising, bloody affair.

I had barely started walking when Eddie Fenech Adami won the title so I only know that event as a historical episode though I obviously have known many eye-witnesses who experienced it. The significance of that race I guess is that exceptionally in the history of the party it was kick-started in spite of the incumbent rather than because of him. Ġorġ Borg Olivier was not convinced it was time for him to leave and he had to be made to realise he needed to by a bunch of young Turks in his parliamentary group.

When the race was on, Guido de Marco enjoyed massive following and looked set to win the race. Eddie Fenech Adami was perceived as less likely. He was less widely known outside the party core and was not perceived by outsiders as an obvious challenger to the formidable Dom Mintoff who had by then defeated the great Borg Olivier, hero of Malta’s independence, twice in a row. 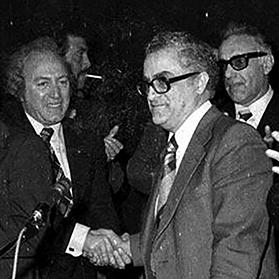 It is speculation no doubt, but I have seen a remark floating around on Facebook these last few days that if the party members had a vote in 1977, de Marco would have been the likelier winner. But the party core went for Eddie Fenech Adami. The alternative histories of the might-have-been-if are for the fiction shelves of the library.

But what did happen was that Eddie Fenech Adami proved to be the statesman of modern Malta. And Guido de Marco was his Deputy Leader for many years. Their political differences meant that their interactions were sometimes uncomfortable. But they hadn’t been forced into a marriage. They didn’t have to be besotted with each other. They each spoke their mind but there was never any doubt that party unity and government loyalty were higher callings than their own personal feelings.

The relationship proved functional, dynamic and productive. And in spite of all the spinning about cliques emerging out of these campaigns these two showed everyone how titanic personalities need not necessarily bring about titanic clashes. Indeed if you really thought the PN was riven by cliques you should be able to say now which leadership candidate the Fenech Adami clique is supporting today and behind which candidate has the de Marco clique thrown its weight. It is clear there is no such thing.

He was made the PN’s opposition Secretary General. When Guido de Marco was retired to the Presidency, Lawrence Gonzi was pushed up to the deputy prime ministership. He was groomed over decades in a succession plan that was transparent and obvious to everyone.

That did not mean the leadership election that followed Eddie Fenech Adami’s retirement was not combative. It was bruising. But that came down to the character of John Dalli. The PN thanks its lucky stars its councillors had the wisdom to rule Dalli out in that election. If he had been elected there would quite possibly be no PN today. But if we’re honest that collective wisdom was clearly aided by Eddie Fenech Adami’s guiding hand. His authority and wisdom, and his record of success, meant that his chosen heir was very unlikely to be defeated. 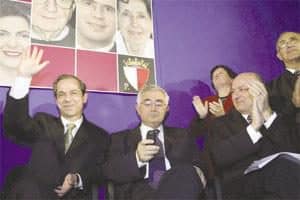 Yes John Dalli was battered by that election but the battering was largely self-inflicted. And his petty school-boy stubbornness and his own sleaze, malice and bitterness peppered by eye-watering corruption in the following years were his own making. Except for the notable exception of his ambulant brief-case holder, Frank Zammit, the withering away of John Dalli did not take with it out of the party any of the support he had while he was still in it.

If any evidence was needed of just how self-inflicted John Dalli’s harm was is the fact that the third candidate in that race, Louis Galea, was not damaged in any way for contesting Lawrence Gonzi or for being defeated by him.

It is quite logical to assume that Louis Galea only contested that election out of reluctant duty to ensure the race would not be among two candidates only, especially where one of the candidates was a cloudy character like John Dalli. He acquitted himself admirably in that race. He had had a long career in the party, achieved more than most manage to dream, and would have made an eminently eligible alternative leader. He campaigned loyally in that he competed to win without hurting and without hurling. And he conceded gracefully at the end being the only one of 3 candidates who emerged from the race stronger than he had entered it in spite of the fact that he crossed the line last.

That race was acrimonious but the acrimony was contained and as the pressure on John Dalli increased during the race his darker side became more transparent and support for his candidature among the councillors who could witness the change in behaviour first hand nose-dove.

Labour could not spin the emergence of factions from that race. John Dalli very quickly ended up naked and alone through nobody’s fault but his own and before anyone knew what was happening he had effectively joined Labour’s ranks. In absorbing him, Labour inoculated the PN from any collateral damage from John Dalli’s shenanigans. If the PN had chosen him as their leader we would have gone down with him.

Simon Busuttil had also been clearly groomed for succession by Lawrence Gonzi. He was pushed up the ranks and there was no doubt in anyone’s doubt that he represented continuation for the party. He probably was less appreciated by Lawrence Gonzi’s ministerial colleagues than Lawrence Gonzi had been by Eddie Fenech Adami’s colleagues when he was being groomed for the top job. When Simon Busuttil ran to replace Tonio Borg as Deputy Leader, he was contested by a reluctant Tonio Fenech who was made to run while expecting to lose and in the process legitimise Simon Busuttil’s election by victory in a contestation.

Tonio Fenech had the support of his ministerial colleagues but the councillors had picked up the thinly veiled signals from Lawrence Gonzi and resoundingly elected Simon Busuttil as Deputy Leader. 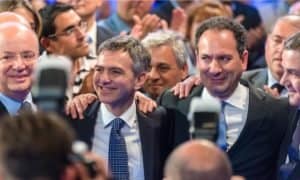 When the leadership election did come along after the 2013 election defeat, his election was inevitable. Mario de Marco contested him and did his best to defeat him. But the inevitable happened and de Marco followed in the great example of his father and stood behind his new leader. No one expected any different. Another deputy leadership position was created and filled by Beppe Fenech Adami creating a trinity that symbolised the party’s heritage of the last several decades.

The party had much healing to go through and the leadership election campaign itself was more of a balm than a hazard.

What is so different this time?

There is no groomed candidate that came up the ranks that the councillors can recognise as heir to the political culture of the party.

And even if there was one he’d be struggling right now because for the first time suffrage has been extended to party members whose political background is limited to an above average interest in the 8 o’clock news and an autographed party flag in a drawer somewhere which they bring out every 5 years. Some of them even rally to the yearly Indipendenza shindig in Floriana.

Many of these people know politics through totems, rallying cries, theme songs and clear and sharp difference from the ‘other’. Here politics is not nuanced. There is no real room for subtlety.

I am not dissing party supporters. Without them there is no politics, no mobilisation, no drive to a shared goal. But they have never been asked to choose a leader before and they are going about their choice the way they always have about any political choice they have ever been asked to make: by identifying their sense of belonging and committing to it on quasi-religious terms.

The nature of the competing dialogue has therefore had to change for this campaign and very quickly they took the very familiar shape of the methods of a national election. Nuance, subtlety and compromise had to make way to the obvious and the obvious includes the hurtful memes that have been making the rounds as if candidates belonged to different parties altogether. The obvious includes people declaring like martyrs in the arena that if their candidate is not elected they will no longer call themselves nationalists. The obvious includes spontaneous demonstration of support and raw power.

The discourse has taken the distinctions between the candidates to the point where the choice is a zero sum game. The distinctions had to be drawn because they could not simply be communicated in private conversations as all previous campaigns had. This campaign had to be fought remotely, most disturbingly over Facebook. There is clearly no precedent for that.

I suppose the short answer then is no, there’s never been anything like this before and it is difficult to use the encouraging experiences of the past to foresee the future. That is why, perhaps, the future is looking so grim while we most heartily wish we are wrong and a new spring is indeed round this corner.

Any other accounts and alternative analyses of past leadership elections are most certainly welcome.