Kurt Sansone spotted a glossy brochure produced by the government giving EU medicines agency employees, details about living in Malta, including, as you would expect, rent prices. His report in The Times digs up some background work on property rentals and quotes Central Bank and National Statistics Office findings that rent prices have been shooting up, by one account by 40% in the space of 10 years and the bulk of that 40% in the last 5 years.

This is the image The Times carried with what the government estimates to be rental costs in various parts of Malta. 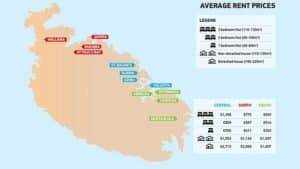 A similar apartment in the south will cost you 700 euro monthly and in the north (north of Buġibba that is) around 800.

Now going by a monthly average wage of 1,500 euro per month, it is clear that most of these properties are not for locals.

Anyone giving basic financial advice to a household earning 3,000 euro per month (two full-time salaries) will probably recommend a top rent cost of 1,000 euro; 1,200 if you’re going to stretch it. Anything beyond that and there’s no money for breakfast.

A number of observations therefore:

Firstly, we are fast reaching a point where families in the Sliema, Gżira, Valletta, San Ġiljan area will be priced out of their neighbourhoods. Remember that the impact of increased rent prices does not only hit people who rent where they live. The impact is also on people seeking to buy homes as vendors expect more return from their property that they can break up in nice not so little annuities.

Secondly, Sliema, Gżira, Valletta and San Ġiljan are not simply addresses within walking distance of e-gaming offices and round the clock entertainment. They are neighbourhoods: residential towns with the social bonds that are being withered and severed. Young families are being pushed from their parents and the solidarity between generations is being lost. Grandchildren lose their grandparents. And the worst poverty of all sets in: loneliness and isolation, particularly of the elderly.

Thirdly, social disadvantage is no longer a problem particularly concentrated in the industrial south and southern harbour areas. I’m not suggesting those challenges have gone away. But we have new challenges in areas that deceptively look prosperous. As Sliema and its satellites are converted into the playing field for the Scandinavian 30-somethings, their long-standing communities struggle to survive. Sure they have the flashy shops and the hip restaurants but more and more people in these areas struggle to make ends meet.

Fourthly, there seems to be no official thinking about this reality. As long as the government feels it is presiding over an economic boom, a new economic revolution, any thought of moderating the economy is anathema.

I recently visited the Franciscans in Valletta. They are busy converting an old part of their monastery into a soup kitchen in the heart of the capital city. I asked them why now? What has changed? The answer, in one word, is rent.

There are many people out there who depend on just over 400 euro a month in social security relief payments. They are unable to earn a living because of health issues. They pay 300 euro in rent to live in abject squalor.  Not to sleep outside they cut doctor appointments and medications from their budget, such as it is. That aggravates their health issues to the point where they skip eating.

These Dickensian realities are around us. The cost of living is first and foremost measured by the basic cost of having a roof over one’s head and that as a ratio of one’s income. That cost is spiralling to the point where many people are feeling the pinch and some are feeling the rack.