Freedom of conscience, of education, of speech, of assembly, are among the very fundamentals of democracy and all of them would be nullified should freedom of the press ever be successfully challenged. – Franklin D. Roosevelt

The Malta Labour Party, today Partit Laburista, has a long history of aggression against the free media. This goes back to the seventies when Dom Mintoff was elected to power in 1971. Mintoff hired lackeys at the national broadcaster, renamed at that time as Xandir Malta, with armed soldiers guarding the premises in Guardamangia recruiting information to ‘the socialist state’.

During the time, the PN’s voice was censored and denied to the people’s ears. At one time the PN tried to broadcast from atop the roof of the party’s club in Valletta. This was soon removed by the government. The PN had to go abroad to make its voice heard and they started broadcasting from Sicily. But after a few months, this was stopped due to the friendship Mintoff had with corrupt Bettino Craxi. Richard Muscat, who was the anchorman for the PN News had to remain in exile in Sicily until the PN regained power in 1987.

There was a time when the Labour government issued instructions to Xandir Malta not to speak Eddie Fenech Adami’s name, but just refer to him as the Leader of the Opposition. The PN countered by encouraging supporters to boycott companies that advertised on Xandir Malta. Pretty soon the only advert on TVM was that of a middle-aged man smoking a cigar in an empty bath. The government eventually backed down.

In October 1979, political thugs stormed into the Times of Malta’s offices in St Paul Street, Valletta and set it alight. The event became known as Black Monday. The Times, however, was published on the following day using printing facilities at the PN’s press. Victor Aquilina, a former editor at the Times of Malta, has written a book entitled ‘Black Monday’. He stresses that “press freedom can never be taken for granted.”

October 2017 was blacker than Black Monday. Daphne Caruana Galizia was an investigative journalist who exposed corruption at the highest levels of Joseph Muscat’s government. They had set fire to her door, they had killed her dogs and finally, in 2017, they killed her.

Notwithstanding the rebranding of the PL, a new logo and a new name, the party continues to show hostility to freedom of expression. Frequently the government only media it controls. The prime minister uses his party’s TV station to announce national decisions.

Minister Ian Borg’s despicably arrogant replies to legitimate media questions are stomach-churning. Recently he attacked a Net News reporter merely for asking a question. “Had I been your head of news, I would have already sacked you,” he told Christine Amaira as she pressed him for a reply. “You ask your question but then I choose what to reply to,” he told the reporter who kept insisting that he was not answering her question.

The PN slammed Ian Borg’s conduct. “The behaviour of Minister Borg shows that for this government anything goes. He has no qualms about attacking open a journalist, seeking to humiliate her.”

“Ian Borg has not yet understood that the media is a pillar of democracy and journalists have the right to do their job. He must defend, not attack them. This is more serious in light of the murder of a journalist because of her job.”

It would have been better if Ian Borg resigned after the court found that he was not credible in his testimony that he took advantage of a vulnerable mentally ill persona for his gain getting his victim to sell him a 665 square metre plot of land for much less than it’s worth. He is the one who should be sacked.

The IĠM (Istitut tal-Ġurnalisti Maltin) criticized Minister Borg. Over the past few months, there were at least three occasions when the organisation reminded the political class they’re obliged to answer questions. “It is a journalist’s job to ask questions. This is a fundamental right if there is to be freedom of expression. It is a politician’s job to answer if they are to be transparent and accountable.”

Suggestion to Robert Abela. By your Ministers and Parliamentary Secretaries buy them some George Orwell, and include the bookmark that “if liberty means anything at all, it means the right to tell people what they do not want to hear.” 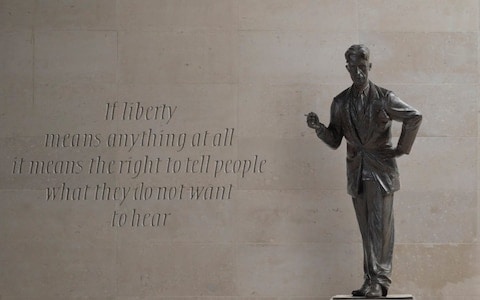