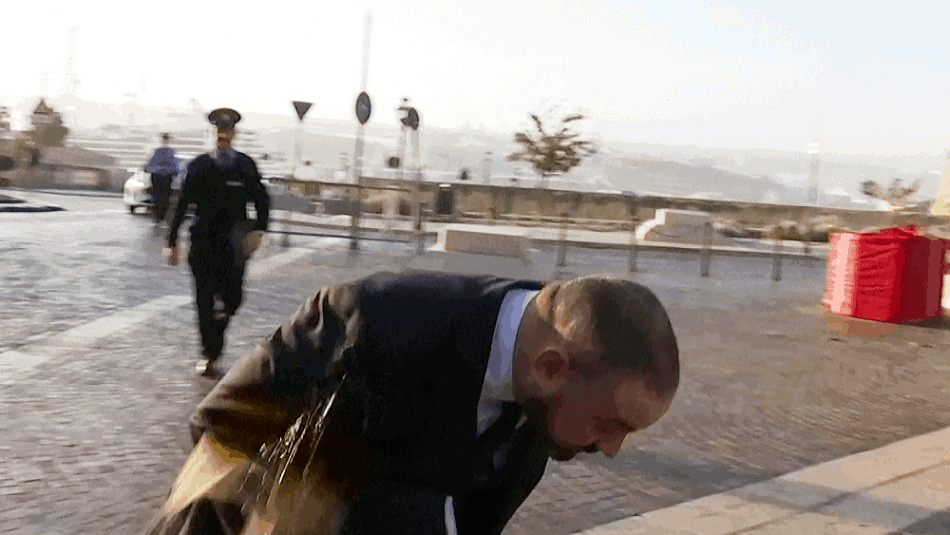 In an interview with Times of Malta, Owen Bonnici today says he “genuinely” feels sorry he “might have hurt” some people when he ordered the Daphne protest memorial cleared some 500 times, but “in (his) defence”, he says he was doing it to “keep the calm in our country”. He said he was ordering the memorial removed at night as a “compromise” to allow protesters to put flowers and candles by day.

To begin with this is an admission that he lied to the constitutional court when he said the protest was being removed “to protect the Great Siege Memorial” because protesters were damaging it. That can’t be true if it is also true that he intentionally allowed the protest to go on by day as a “compromise”.

Also, the clearing of the protest memorial was at first happening by day and it started happening by night because government employees refused to the job under the glare of cameras filming them do it. At 3 am nobody was there to film them.

But his relatively new self-justification is also a lie. He points out today that for a year (it was not that long, he first started clearing the memorial in early September 2018) he allowed the protest to go on undisturbed. Then why does he say he needed to start removing it to keep calm in the country. If anything, the trouble started when he started removing it, when thugs got furious that protesters defied him and put the protest back every time he censored it.

And if the protest disturbed the peace to the point of disrupting calm in the country, how was allowing it to happen by day and cancelling it every night changing anything?

And why should Owen Bonnici or anyone feel they must rule in a dispute between protesters calling for justice for a murdered journalist and thugs who threatened or beat those protesters by censoring the protesters instead of restraining the thugs?

“Genuinely sorry (he) might have hurt people” with his decision which he continues to defend, is he?

Since the constitutional court found against him Owen Bonnici has gone way past his own defence. If he feels any regret he should not apologise to “people (he) might have hurt”. This is not about anybody’s touchy sensibilities, you inveterate moron.

He should apologise to Daphne’s family, since he cannot apologise to Daphne, and admit he was wrong to censor a protest and sacrifice his basic duty of protecting free speech because the views expressed by the protest he censored were inconvenient to his client Joseph Muscat.

What is Owen Bonnici expecting today? Our thanks? Is his insincere regret supposed to calm things in the country now? Unlike him we never destroyed property in the middle of the night. Unlike the thugs he protected we never threatened or hurt anyone. Unlike his clients we never killed anyone in a car bomb.

But that doesn’t make us meek. He can take his apology and stuff it right up that dark place where he rolled up the court decision which branded him a human rights violator.