The cynicism is truly astounding 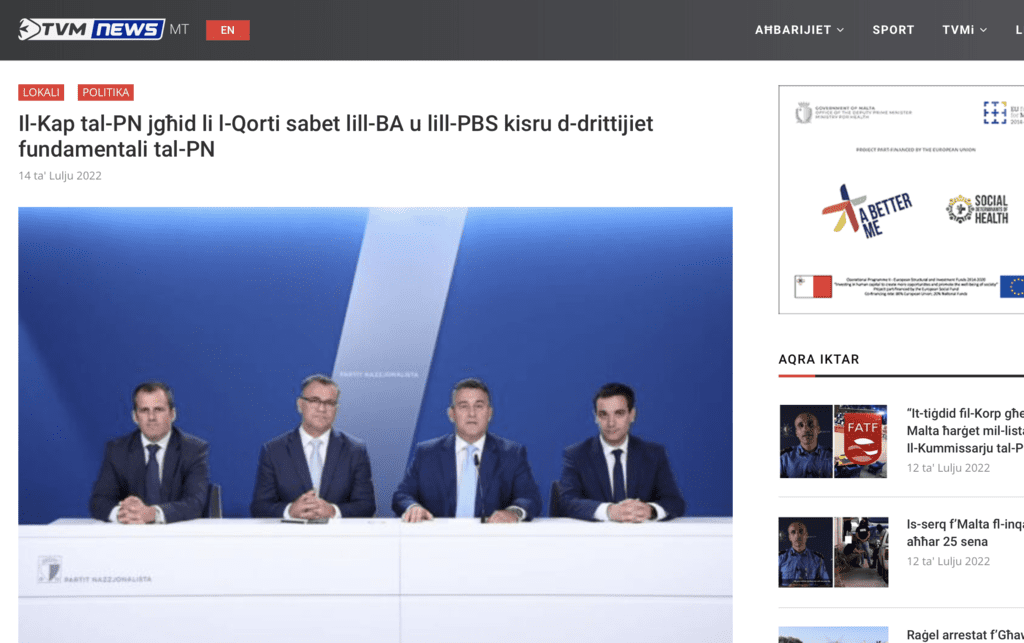 This is what passed for coverage of yesterday’s court decision on the home page of TVM’s website. The report of the PN’s press conference includes a link to an earlier report published by TVM that summarises the court decision.

They published that “fair” report hours after the decision was handed down, hours after all other media had already reported it. And quickly they hid the report under another layer, the report of Bernard Grech’s comments.

For most readers of TVM all the news they’ll be getting is that “the PN leader said the court found the Broadcasting Authority and PBS breached the PN’s fundamental rights”.

The deviousness, the malice in that headline is astonishing given that hours earlier the court had criticised TVM not merely for being a tool for the government’s power but for being a tool in the abuse of that power.

It should be incredible that a media organisation that employs the largest and best paid team of reporters in this country, that spends millions every year in funding media productions, that exists for the purpose of informing, educating, and entertaining this community, has been found instead to have “trampled free speech underfoot”. That’s my loose translation of the idiomatic phrase the judge chose: “jikkalpesta l-libertà tal-espressjoni”.

That type of chastisement should rightly be bringing about massive resignations at PBS. Any board members in office when the incidents that caused the judge to speak in this way about PBS should immediately resign. The Editor of TVM should resign. Reporters working at the national TV should walk out in protest and demand they are handed genuine editorial control so that they can provide the public with an independent service rather than perpetuate the outrage that was so explicitly described by Judge Grazio Mercieca yesterday.

In this country, when a branch of the state is found by the court to have acted illegaly, in breach of fundamental and constitutional laws, stepping human rights underfoot, it’s an ordinary day for the convicted perpetrators.

Never mind the fact that resignation would not occur to them. That headline – that it was Bernard Grech who was saying that the court found PBS contributed to deny the PN its right to free expression – is an act of contemptious defiance of the court. It is maliciously misleading. It implicitly suggests that only a biased reading of the court decision (and Bernard Grech is obviously biased because it concerns him) would lead one to conclude that PBS did something wrong.

In a roundabout, carefully written way, they lied to the public about what a court had just decided about them.

Some people might wonder why this is so important. The government sprayed its shorts because it opened a spaghetti junction, the PN were not given the opportunity to give their side of that story (to say what?), people who were interested in a dramatic preview of the road, watched. People who weren’t, didn’t. Why are we still talking about this?

The narrow search for redress for imbalanced reporting lost any value of interest a long time ago. The PN are as interested now in getting a slot in TVM to speak about the Marsa overpass as much as you’d be interested in watching it.

What this case demonstrates in fact is that the complaints process does not work. There’s indeed an ironic twist in this court decision as far as that’s concerned.

Apart from the breathless live coverage of the junction opening, the PN complained about government paid-for propaganda promoting its budget for the election year. The judge did not find for the PN on that issue not because he disagreed the government’s propaganda was unbalanced and PBS broke the rules when it aired them. He turned down the PN’s complaint saying they should have first complained to the Broadcasting Authority and sought redress there before turning to the coarts for a decision.

That doesn’t sound right. Especially given that the judge himself said that in the media only timely redress is useful redress and elsewhere in his decision the judge ruled that timely complaints made by the PN to the Broadcasting Authority did not yield results in any case.

You’ll be mistaken to take this matter lightly. This is not about Bernard Grech making a fuss because he doesn’t get the sort of face time on prime time television he might feel entitled to. This is about those tens of thousands of exclusive TVM viewers for whom it isn’t news unless TVM says it is, and for the many more who follow the news on the fly tracing their eyes lightly over alerts on their smart watch, and those people’s right to be given a full picture of what is happening in our democracy, to hear contrasting opinions, to discover facts the exposure of which presses on competent authorities to act against illegalities, and so on.

The public’s right to know is being systemically undermined by Labour’s cronies at PBS (and at the Broadcasting Authority). It’s not just that you’re given a reductive, misleading  window into what the Parliamentary Opposition wants to say. TVM, for which read the government, shuts out all undesirables. And as that TVM report on what Bernard Grech meant to say yesterday shows, they have no intention of stopping the abuse.