From the comments and posts of some supporters of the Adrian Delia campaign, a chorus of disapproval of Daphne Caruana Galizia and her reporting has emerged in the last 48 hours. I should imagine she has expected no less and in any case she’s a big girl and does not need defending. The disgusting name calling, primeval misogyny and visceral hatred is nothing new to her. I doubt it hurts her any less or any more that the screaming mob baying for her blood supports the PN rather than the PL.

These people are not asking for the presentation of reassuring facts. They are instead running with a personal crusade to discredit the stories being published before anyone can even absorb them. The credibility of the author is dismissed for being motivated by a hidden agenda and controlled by a hidden hand.

This is how Joseph Muscat dealt with Daphne Caruana Galizia. And that is how the cohorts of his supporters fought their boss’s cause in the trenches of Facebook and the on line comment boards, the water cooler of our time, the Verdun of this generation.

It appears, from the comments and posts of some supporters of the Adrian Delia campaign that discrediting Daphne Caruana Galizia requires bolstering the credibility of her greatest nemeses.

So out they come in defence of Joseph Muscat.

I can only hope these Adrian Delia people who claim they “do not believe the Egrant story” are on rogue individual initiatives. But the Adrian Delia campaign should assure us, positively, that this is not a coordinated strategy.

It was spine-chilling yesterday on the so-called leadership debate on the PN TV station for the proto-fascist Frank Portelli to mimic the gesture of a person crushing parchment and tossing it in chimerical flames, an action which he rather prosaically described as ‘the rubbish heap of history’. He was operatically mimicking his imagined disposal of Daphne Caruana Galizia. Frank Portelli has no followers to speak of.

But Adrian Delia does and his campaign has nothing to benefit from its supporters repeating Portelli’s platitudes. Or improvising on them by spinning this notion that Portelli and Delia follow Joseph Muscat in the list of “victims” slandered by the journalist: that they “don’t believe in Egrant”.

Do we need to remind everyone again why Egrant is not a myth foisted on us, the credulous and the gullible, by a mind-bending sorceress?

Has anyone forgotten documentary evidence of Brian Tonna, Keith Schembri and Konrad Mizzi setting up 3 companies in Panama within 3 days of winning the 2013 election?

Has anyone forgotten the email from Brian Tonna’s junior partner advising Mossak Fonseca that Egrant needed to be set up for someone more sensitive and more important than Keith Schembri and Konrad Mizzi?

Has anyone forgotten that when the story was confirmed by the Panama leaks, Joseph Muscat did not fire Brian Tonna, Keith Schembri and Konrad Mizzi?

Has anyone forgotten the documented evidence of commissions paid into the accounts of Keith Schembri held at Pilatus bank from the sales of passports by Brian Tonna?

Has anyone forgotten the eye-witness account naming Joseph Muscat’s wife as the owner of Egrant and receiving a million dollars from a Dubai company owned by the Azerbaijani’s President’s daughter?

Has anyone forgotten the corroborated evidence in an unpublished but leaked FIAU report that reported on a million dollar transaction involving accounts held by politically exposed persons?

Has anyone forgotten Joseph Muscat flying without press and without any civil service presence to negotiate an oil deal personally and directly with the Azerbaijani President?

Has anyone forgotten findings published by the Auditor General that Konrad Mizzi’s intervention in oil procurement brought about massively disadvantageous purchase and we paid higher fuel prices as a result?

Does Daphne Caruana Galizia feature personally into any of this story except that she broke it first before all the other facts emerged anyway from multiple and corroborated sources?

And now, we ‘don’t believe Egrant’?

I am reminded of those clowns waving the Labour Party flag after their re-election last June celebrating in front of the Pilatus bank or taking selfies with Konrad Mizzi thanking Azerbaijan for Labour’s victory. 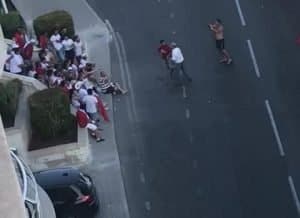 I remember wondering whether I was loyal to the PN that if Konrad Mizzi and Keith Schembri and Joseph Muscat belonged to my party and secured its re-election, I would gloss over the facts and pretend it does not matter what they do at Pilatus and with Egrant did not matter as long as we had won. And I knew I could never do that.

Do you know what the really funny thing is with what’s going on right now? These ‘heroes’, experiencing an epiphany of sorts in the last two days and claiming the Egrant affair was a figment of the imagination, are not glossing over the crimes of the other party, in a move they perversely and inexplicably believe is in the interest of the Nationalist Party.

Have they really bought in to the self-evidently idiotic notion that to beat Joseph Muscat we need to fight him with a clone of his?