This piece in the Daily Mail is intended to damage its real target – Tony Blair – by his association with two unsavoury characters Ilham Aliyev and Joseph Muscat.

The Daily Mail dislikes Tony Blair for its own political reasons. It’s a fiercely pro-Brexit newspaper and Tony Blair’s objections to Brexit are an annoyance it attacks as a matter of course. Add to that Tony Blair’s unpopularity since leaving office and you have an easy target to right-wing fire. I’m not going into an evaluation of To 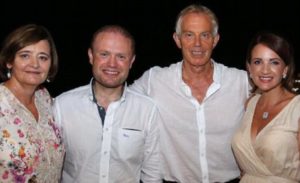 ny Blair and nor am I going to start becoming a supporter of Brexit and the British right-wing press: I despise both.

But it is significant from our point of view that the Daily Mail, dubious credentials and all, uses Joseph Muscat to make its target look bad.

The newspaper report essentially has 3 elements:

It’s for that third point that the newspaper proceeds to provide details of the Panamagate scandal in Malta. There’s nothing we haven’t 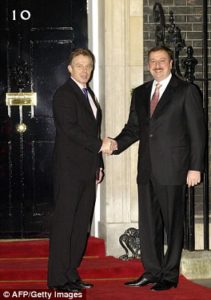 known for some time. But reading it on the international press is still chilling.

The Daily Mail notes that in spite of all the evidence, Joseph Muscat has recently been re-elected after a campaign centred on his corruption and his vehement denials.

“An important propaganda tool during that election campaign was a video endorsement in which a well-known international ‘statesman’ addressed voters over an uplifting soundtrack of violin music, declaring, ‘I’ve known Prime Minister Joseph Muscat for some considerable time’ and describing him as ‘a great example of what a progressive politician can do in power for the people’.

“The name of that ‘statesman’? Tony Blair.”

And with that parting shot, remember, the Daily Mail is only mildly interested in how Joseph Muscat emerges from its report. This is not about Joseph Muscat being made to look bad because Tony Blair endorsed him. What this really is about is making Tony Blair looking bad for endorsing yet another corrupt slime-ball.