The true meaning of l-aqwa żmien.

To my mind the worst thing that’s going on is that this whirlwind around Daphne Caruana Galizia’s reporting of Adrian Delia’s affairs is creating and solidifying a set of myths that replace reality as it should be obvious to everyone and postpone indefinitely the day when the PN comes to terms with that reality and starts impacting it in some way.

Adrian Delia has garnered support with party supporters who wish for nothing more than to see their party returned to the old winning ways. Their hankering for new solutions is nothing but nostalgia: it is not forward looking. It longs for the days when their party was habitually in the right and habitually celebrating victory after victory.

Manchester United supporters were used to celebrate every year. And then after a significant retirement the winning seemed to stop. PN supporters want the winning to come back and in Adrian Delia they saw the person who could do that for them.

Now Adrian Delia turns out to have baggage that may have been perfectly fine for his old job but apparently incompatible with the new one he’s looking to acquire. For let’s not beat around the bush. What is being suggested now, and has not yet quite been denied, is flirting dangerously with money laundering. Not his own money to be sure. But that’s neither here nor there.

So how are these nostalgic supporters reacting now?

That is a mantra they picked up from the gloating, victorious Labour party right after the election. At first they hated it and now they buy it.

It seems that these PN supporters have not understood that were it not for the Egrant and Panama stories, the PN was flying straight into a far greater defeat at the last elections. The party had gained barely any momentum in the four years after 2013, certainly not enough to convince people who switched at that earlier election to reverse that trend. Quite the contrary it had in the meantime lost more support of people who were still too timid to switch their votes in 2013 but had stopped being timid by now.

Its take-out-the-vote infrastructure was in tatters; its senior management was isolated; its funding was dry. Its politics was embarrassed of a glorious past making a contrast with the government it was opposing unclear.

People perceived the economy to be doing well: right or wrong. They were feeling the egoistic benefits of relaxed planning laws, nepotism in public sector employment, easy access to favours and short-circuiting of the rules that could be made to apply only to other people.

We have analysed this over and over again. The Egrant and Panama stories slowed down and reversed some of that trend.

It was really the first and for many the only reason not to vote Labour. Because some 6,000 people that may have otherwise voted Labour felt that it was not OK to have a corrupt government in office.

But any statistical analysis of the voting trends and polling data will show that had it not been for the Egrant and Panama scandals, Labour would be gloating over a 50,000 vote majority right now not 38,000.

Even though the PN lost the election it is still not OK to have corrupt politicians running the country.

I could not believe my eyes this morning as I read on Facebook posts from complete idiots, wrapped in the PN flag just 4 months ago and now arguing that it would be a good thing if Adrian Delia was corrupt and had hidden stashes in secretive jurisdictions (which there is no suggestion of as a point of fact) because that is the sort of thing the public would choose to elect to power.

This is rank stupidity.

If Daphne Caruana Galizia is in the mood of providing a service to the community – and she’s under no obligation to do so – it would perhaps be more merciful on all of us if she came out with all she has and hope like we all do that rationality prevails. Serialisation is dramatic and who can blame a journalist for having a flair for the theatrical. But we are now facing an implosion where a fuller appreciation of the facts could lead to a healthier, more productive outcome.

But even if she does not: this assumption that political journalism has to work on the brief and in the interest of either party is democratically immature. We are not going to get anywhere like this.

Someone else is: Joseph Muscat. Oh for him these dark clouds on middle earth surely are the best of times. 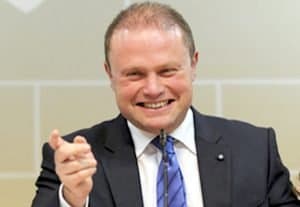 Previous:Where the analogy stops
Next:Animals sleeping in beds … without sheets