I don’t know what it is about Facebook that gets the worst out of people. I suppose it’s the almost total absence of inhibition. Also the false security that its infrastructure gives that hints at privacy where there is none.

Watching people at each other’s throats over the choice of the next party leader is excruciating. The debate, let’s all pretend it is one and call it that, is undignified, personalised, shallow and damaging.

Leave aside for the moment Alex Perici Calascione and Frank Portelli. The former is a footnote of sorts and the latter a freakish aberration. But camps have now formed and trenches dug out along the battle lines of Chris Said and Adrian Delia.

After all the existential angst during the same-sex marriage debate about whether the party’s future is conservative or liberal, the leadership race has almost zero ideological content. That is not such a bad thing. The overlapping of cleavages reinforces them. If the line between leadership candidates is drawn on top of the line between ideological factions, the case for unity becomes weaker. Liberals and conservatives appear split in equal measure between Delia and Said. Both streams seem to feel their views can outlive this election.

But some numbskulls seem to be under the rather far-fetched idea that the ‘other’ candidate, whom they know next to nothing about, would be a disaster they could not live with.

I suppose I can 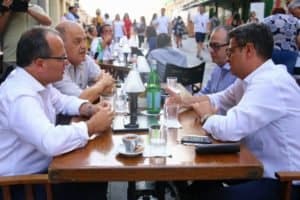 ’t resist it: ‘when you play the game of thrones, you win or you die’. This is the zero sum game some of these people seem to be playing. It is hard to imagine why. The history of the PN is full of unsuccessful leadership candidates who went on to make a heroic contribution to its story. Supporters of Ċensu Tabone, Guido de Marco, Louis Galea and Mario Demarco did not feel the need to quit the party when their candidate lost the regatta of their political lives.

There’s a sore exception to this roll call of course and that is John Dalli. But he’s a discussion for another day.

It is perhaps pointless to ask restraint from people whose only experience and knowledge of politics is in their fingertips as they hit the keyboard with determined violence and extreme prejudice.

But really Jason Azzopardi should know better. I’ve known and worked with the man for years and testify to his undoubted capabilities. Which is why it shocks me to see him allow himself to be provoked and to respond to Facebook taunts so clumsily.

This is not simply about pleasing Labour no end. It is that. But it’s also about throwing volleys at an unknown future and burning the chances of recovery and reconstruction.

Even at the times of the undisputed authority of Eddie Fenech Adami, the maxim has always been that no one, no one is greater than the party. If that is so, than the outcome of this electoral context surely is less important than the interests of the party. Why are so many people who should know better forgetting this?

Perhaps it is unfair to single Jason out given how many others appear to have lost it at some point in the last several weeks. Edwin Vassallo and Mario Galea had their day in the mud as well.

When all these Don Quixotes go rogue it is hardly surprising that every little Sancho Panza and his dog come out to bare their sweaty chests.

We still have another 5 weeks or so before a new leader is elected with the unenviable job of cleaning all this up and presenting each and every one of us with the choice of quitting or shutting up.

I have nowhere near the authority he will have. But right now these hungry cardinals who have had too much wine after the last pope’s funeral need to be told to sober up and look the part.

No one needs die in this game of thrones.

Snap out of it, will you?