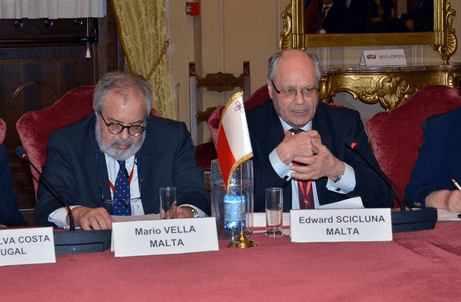 It just never ends. This government is fundamentally indifferent to the way the world sees us. We’re already in shit with the European Central Bank for a number of reasons. We had two banks licensed since 2013 shut down for pervasive money laundering. Our status as a white-listed and compliant financial jurisdiction is in serious doubt. One of Malta’s members on the ECB’s supervisory board has “suspended himself” for accepting the hospitality of a licensee he regulated, who turned out to be the alleged killer of a journalist.

Edward Scicluna once complained that a taxi driver in South America went on about corruption the moment he was given a reason to think of Malta. What does he think is the Malta-themed water cooler chitchat at the ECB building in Frankfurt?

Allow me to speculate. They’ll talk about Malta selling passports to inveterate crooks and heavy-duty money launderers giving them anonymous access to the eurozone financial system, thereby undermining it.

They’ll talk about Malta’s hopeless financial intelligence agency that had a managing director who stunningly resigned in the middle of the investigation that could have halted Pilatus Bank before all the damage was done.

And then they’ll talk about Edward Scicluna, the man who’s mostly worried about what Latin American taxi drivers think about his performance, who has recently “appointed” a new FIAU chief until Karol Aquilina drew Parliament’s attention to the fact that the “appointment” was invalid because Edward Scicluna bypassed Parliament. Speaker Anġlu Farrugia, never known to go out of his way to back the Opposition, agreed.

And the chat du jour in downtown Frankfurt today? That Edward Scicluna is going to be the governor of Malta’s Central Bank. He’ll bring to the regulatory side of the eurozone’s monetary system, criminal investigations into his conduct at the hospitals privatisation. Which if he got caught out with while in office as governor would have forced him to resign, if this had been a country that wanted to be taken seriously.

The thing about the eurozone is that monetary policy and oversight are fiercely independent from elected governments. That’s what differentiates modern, sustainable economies from tyrannies were currencies are policy tools to be used and abused in the service of short-term partisan programs.

Malta’s institutions have earned a global reputation of being puppets in the hands of the government of the day. Robert Abela promised to turn the page from Joseph Muscat’s days and show the world that “institutions work” here. He knows he’d better do that while we’re trying to pass the Moneyval and FATF exams. If we fail those, economic catastrophe will be an understatement.

So, what does he go and do? He appoints Edward Scicluna as Central Bank Governor: a man so utterly beholden to the Labour Party and its government that he openly admitted at a public inquiry that he didn’t loudly complain when he was excluded from important government decisions to avoid making his party look bad.

What self-respecting finance minister with anything like a mind of his own would accept such a state of affairs and not resign in a huff? How can anyone so servile and so mindlessly loyal shape and oversee monetary policy independently, and possibly against the narrow partisan interests, of the Labour Party?

So out goes the iron curtain dinosaur Mario Vella, whose training in economics was peppered with notions of the nationalisation of the means of production and the dictatorship of the proletariat. And in comes the pretend-Keynesian dinosaur Edward Scicluna whose economic philosophy, as far as could be discerned during his 8 years as Finance Minister, is built on the maxim of ‘his is not to reason why; his is but to do or die for Labour’.

He’s ok though. It’s the rest of us that are fucked.

Previous:Do not let the Castille thugs get away with this
Next:Miracle workers