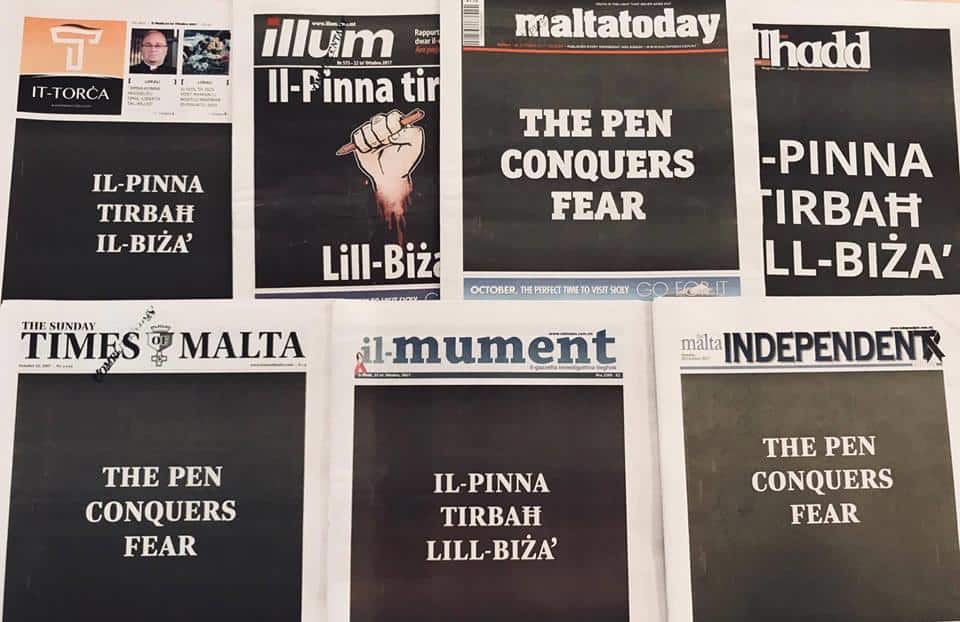 I was saddened to see the Institute of Journalists explicitly distance itself from The Shift News. You may call me a chicken but I’m not here to pass judgement on whether the reaction was proportionate or not. I’m not here to pass judgement on anything or anyone because if this is about journalists aiming their guns at each other instead of aiming them at the real culprits of wrongdoing in the country, I have often been guilty of this.

I am no wise man teaching others how it should be done. I do have views of course.

I do think the state has an obligation to ensure that people’s right to be informed is satisfied and if hard times require that obligation to include paying financial subventions to news organisations, then so be it. The cost of the judicial system is paid for by the state and the payments are administered by the government. We have reasons to doubt the independence of the judiciary but we’re not suggesting judges should raise their own taxes.

I do think most journalists and editors working for independent media are sincere in their desire to report the truth and within the limits of their resources, their abilities, their time, and quite beyond the limits imposed by a hostile and secretive government, they do so. I believe this has become truer since Daphne was killed. That is not a happy observation. It is tragic that a journalist needed to be killed for other journalists to appreciate the importance of her work and develop a desire to imitate it.

I think the notion of original sin is a moral aberration and by extension I am not impressed by arguments that journalists working for a newspaper today can be presumed to have nefarious intent because years back a Managing Director they had nothing to do with was corrupt and complicit in crimes committed by politicians. Also, by the same extension I don’t believe in collective guilt and if an owner of a newspaper limps about with an enormous chip on their shoulder it does not necessarily follow that all the journalists they employ are incapable of acting independently of them and of the government that pays them.

I don’t think that space for commentary by people in politics is in and of itself objectionable. As long as it is truthful and there is a balanced space for different views and as long as it doesn’t drown out the multiple voices of people who are not in politics.

I do think that there exists a real threat for independent journalism in Malta.

Some of it is not a result of government action. The conventional model of relying on advertising is no longer working.

Private sector sources of advertising dwindle in times of economic downturn such as the one we’re experiencing. Much of the money goes now to social media platforms because they give advertisers a more penetrative, manipulative and effective reach to their customers. And just because the money comes from the private sector, it doesn’t mean there is no risk to influence news content. The historical relationship between the local press club and a foundation set up by the Fenech family is perhaps a classic warning.

Public sector sources of advertising risk becoming disproportionately influential as their share of the total advertising income for news organisations grows. The government’s spend on advertising is not transparent and entirely discretionary. They will use advertising spend as a carrot and a stick, rewarding sympathetic reporting with a greater spend and punishing what they perceive as hostile.

Judging by the content I read in Times of Malta (and not only Times of Malta) I think journalists that tell me they are not asked to measure what they write according to whether the government is going to like it are being entirely truthful. They deny having been influenced by the government’s threats or the rewards of others. We know some are because much as proclaiming collective guilt is abhorrent, absolving the guilty is also misleading. But this is not an article meant to criticise journalists (even the ones that deserve it). It’s an article calling for a pause in the civil war.

The journalists that deny having been influenced by the exercise of governmental discretion, when pushed admit they fear that in future it my happen in spite of what they wish. There is a possible future where the continuous shrinking of budgets of news organisations will mean less journalists working, with less time to cover anything but what they’re fed. Salaries are humiliating as they are and there is no prospect for growth meaning that the good guys will need to leave the profession merely to feed their families, leaving their space for others who may not be so fiercely determined to work independently of government.

You and I may struggle to imagine our country without Times of Malta or even Malta Today and the others. But people working there who have an inkling of the financial realities of their organisations know that a world without them is no longer so inconceivable.

There’s the model of asking people to donate money to support news organisations. Even the once unassailable Times of Malta has resorted to this. The heady days when Adrian Hillman thought it was possible to get people to pay a subscription if they wanted to leap over the paywall are dead and buried.

The example is of course The Guardian in the UK that has turned the financial corner as a result of public financial support.

I am delighted to see newsrooms competing for the next best story and flirting with good writers to get them to contribute. I find competition to chase advertisers a bit distasteful but I understand why it’s done. I find negotiations with the government for funding behind closed doors profoundly objectionable, equivalent to my mind to having a judge asking the government how much they’re going to pay them in wages even as they have to rule on a case where the government is a party.

And I find the competition for donations a new level of risk of diluting the sincerity all readers are entitled to, whether they choose to make a donation or not. It may seem harmless though perhaps inelegant and unsightly to see organisations, newsrooms and individuals falling over themselves to claim paternity for the cause of truth and justice. But rewriting history to accommodate a narrative that benefits a news service in order to get a bigger slice of the donations cake is just the sort of distortion independent media resist when the government wields its huge arm of influence.

Do I have a solution? Certainly not to the financial problem of being a full-time journalist in this country. Whether in the employment of someone else or like me acting as a freelancer or as the owner and investor in a news business, this trade is precarious and constantly on the edge of financial bankruptcy. However genuine the intentions – and I happen to believe they almost always are – there is no guarantee that independent journalism will always be around.

I would insult you by telling you who’d benefit if Times of Malta or Malta Today or The Shift News or all the other could no longer afford to stick around. You can work that out for yourself.

On this there should be a basis for agreement. Last November all these news organisations lent their names to the protests in the streets. We could be awkward and start debating why some took longer to sign up than others, and who led protests from the front and who came along simply because they could no longer avoid being there. But casting doubts on the credibility of our own allies does not only hurt them. It hurts us.

And it hurts us in the midst of all the other reasons why the independence of journalism is under threat, some of which is indeed caused by the government. We all get our turns in facing the heckles and crass intimidation, physical or virtual, by mobilised troll armies. We face strategic law suits meant merely to shut us up. The authorities do not consider the safety of threatened journalists as a matter of state responsibility. We live in a country where a journalist has been killed and where the government continues to obstruct the process to determine the truth and serve justice in that case. Politicians exposed by journalists for corruption – including most prominently by a journalist who was murdered for doing so – continue to run about with impunity.

More. The government has made a mockery of the notion of freedom of information. Covid is yet another excuse for the government to avoid questions from the press. Independent media are put in line behind propagandists employed by political parties and poorly disguised as journalists. TVM’s editorial line is so slavish to the government’s partisan interests that everyone else is now too exhausted to bother to complain.

No individual newsroom is going to manage to force change in these issues and enable journalists to safely and sustainably do their job if we continue to highlight the suspicions we cultivate about each other instead of building on the common horrors that we all face. That hurts us.