PODCAST: We’ve had our fun with Jason’s pilgrimage.

As always, if you prefer to read the article instead of listening to the podcast, scroll down for the transcript.

Manuel Delia · PODCAST: We’ve Had Our Fun With Jason’s Pilgrimage

Now let’s focus on what matters.

Konrad Mizzi spent the night in jail last night because the police are not done asking him questions about financial crimes. Keith Schembri was picked up this morning by the police for the third time in less than a year. Joseph Muscat is serenely at home.

These are the people who did rather worse than accept a €200 hotel bill from the Fenech family. They perpetrated a major fraud on every single consumer of electricity in this country in cahoots with the Fenech family. We are still paying for that fraud and will continue to pay for the foreseeable future. Schembri and Mizzi ran around the world to set up secret companies and secret bank accounts to launder the bribes that would pay them every hour of the day what Jason Azzopardi accepted in kind once on a three-day trip to Israel. Almost $2 million a year.

‘Nothing happens.’ ‘They’re all the same.’

That’s what they want you to think because the last thing Konrad Mizzi and Keith Schembri would like is to have their liberty restricted.

The crooks exploit the general sense of ennui. They throw at us little pieces of excitement that help confirm our prejudices, praise ourselves for our scepticism.

Consider some things you have been reading.

First, you have the guy who keeps proclaiming there is a general conspiracy to prevent Keith Schembri, Konrad Mizzi and Joseph Muscat from ever facing justice. There’s no disagreement there. Of course, there’s such a conspiracy and it’s been in place since before 2013. That’s why it’s only this morning that two of those three are sitting uncomfortably at police headquarters today: because there’s been a conspiracy between mafia bosses, corrupt politicians, bent cops and sleepy civil servants that allowed that to happen.

But now a NeoMcCarthyism has set in: throwing anyone and everyone into the same conspiracy. Times of Malta is a frequent target of this when we simply would be nowhere near where we are now without it. Good police work is putting Keith Schembri and Konrad Mizzi on the spot today. But the bent cops would still be running the show if Times of Malta had not outed them. How did you find out about Silvio Valletta’s relationship with Yorgen Fenech? That’s right. You read about it in the Times of Malta.

The second point also touches Times of Malta but only the NeoMcCarthyism that accuses the newspaper of working for Keith Schembri casts the incident of Yorgen Fenech seeking to bribe Ivan Martin as something that can be blamed on Ivan Martin. I’ve been told I ‘lost my moral compass’ for tolerating the notion that Ivan Martin met Yorgen Fenech’s lawyers. It’s not something I would do because I’m a commenter not a reporter with the job of covering all bases. If I found out about Ivan Martin getting money from Fenech’s lawyers from someone else I’d be in my right to suspect Ivan Martin of wrongdoing. But I found out from him. He left the room and went to tell his bosses an alleged journalist-killer has just offered him money.

And let’s cut the sophistry out, shall we. The money came from Yorgen Fenech. If Yorgen Fenech didn’t want this to happen he’d have fired his lawyers’ arse pronto. But here we are, a week later, and they still hold his brief. This was an attempted bribing of a journalist by an alleged journalist-killer. And now that he refused to take the money and exposed the attempt instead, the journalist is in clear and present danger.

Have we learnt nothing?

And then of course the third story. Look, I’m grateful for the very clear, reasonable and balanced debate in the comments board under my post on Monday where I defended Jason Azzopardi. The man fell short of standards we are entitled to expect and we’re right to be annoyed at him. But can we stop destabilising our ability to fight back the massive corruption that blights us by biting the thighs that we can reach.

I’ll have to explain that. Keith Schembri and Konrad Mizzi were caught with Panama companies. They did not resign. Joseph Muscat did not fire them. They were re-elected in 2017 and they stood on while the journalist that exposed them was killed. It was only after Daphne was killed that most of us took up the challenge of resisting this long-standing outrage. And it’s only now, almost five years later, that they are starting to face some serious heat about it.

If in February 2016 we found out Konrad Mizzi and Keith Schembri accepted the payment of a €200 bill on a trip to Tel Aviv, we’d have long forgotten the story by now. That sort of thing happened unnoticed because they were busy dealing with Café Premier, the Gaffarena property, 17 Black, a Montenegro wind-farm, the Electrogas power station, tuna smuggling, fuel smuggling, opening the doors to the mafia in the gaming industry, absolving John Dalli of bribery, and on and on and on.

I know this is not a popular idea on this blog and that’s because this blog is read by people who expect good governance and honest politics. And that means they, like me, expect their politicians not to accept hospitality from businessmen. But the Panama scandal and the murder of a journalist to cover it up are just not the same as a trip to Tel Aviv.

Consider this – let’s call it a joke – that went up on Facebook when Jason Azzopardi ‘suspended himself’ from the PN parliamentary group pending an internal investigation. I won’t go into whether self-suspension was the right thing to do or not. Suffice it to say that I still think that temporary-reversible-auto-cessation is an imaginary state of limbo which is to me rather meaningless. But in any case, this was the reaction of someone who dislikes Jason Azzopardi because Jason Azzopardi disliked Adrian Delia. 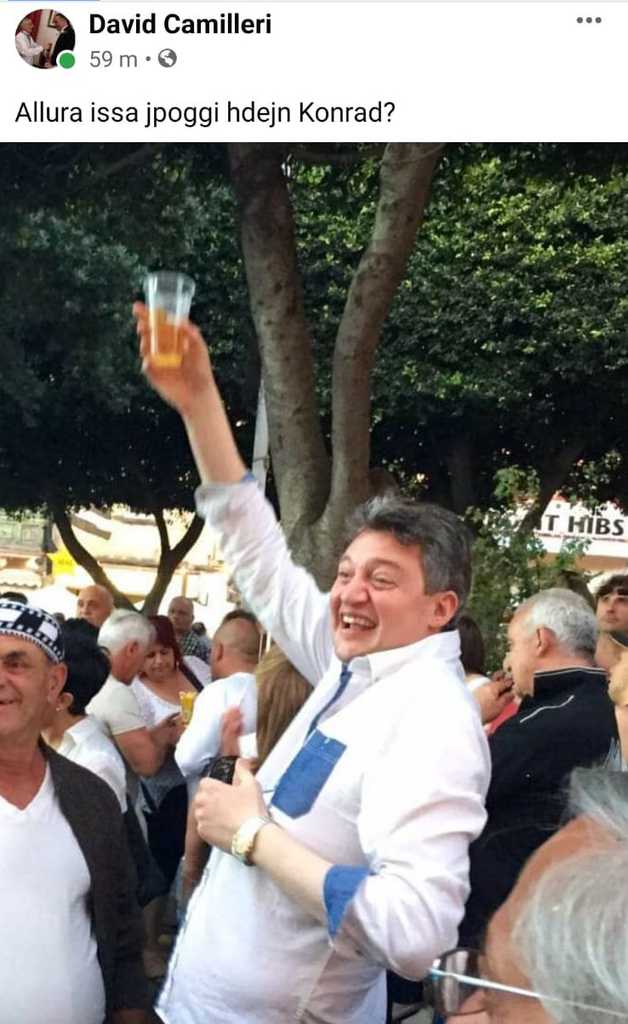 He put up that famous picture of an inebriated Konrad Mizzi hauling a cup of beer grinning like he’s just lost his virginity and asked if Jason Azzopardi would now be joining Konrad Mizzi in the dunces’ corner of the Parliamentary chamber.

The ‘joke’ here is that like Konrad Mizzi, Jason Azzopardi is for the time being an ‘independent’ MP so in this respect at least they’re in the same situation.

You think that’s funny? You think it is proportionate that Konrad Mizzi and Jason Azzopardi given what each is known to have done, end up in the same situation and face identical consequences?

Perhaps this jokester can now update his humour because no one expects Jason Azzopardi to be arrested to be interrogated for financial crimes alongside Konrad Mizzi.

So there. Three stories in two weeks aimed to distract us from the real things that matter in this country because we’ve known about them for so long. Three stories or lines of commentary designed to take your mind off Joseph Muscat, Keith Schembri and Konrad Mizzi.

And Yorgen Fenech. Because your bite can reach Jason Azzopardi’s thigh and you can force him to apologise, maybe even resign, because that’s what decent people do when they’re made to realise their mistakes. It took him two days to say he realises he should have done the opposite of what he had done.

But this morning you can bet that Keith Schembri and Konrad Mizzi are doing one of two things five years after their Panama secrets were exposed: protesting their innocence or invoking their right to remain silent. Meanwhile Yorgen Fenech is dishing out money and biding his time. All he cares about is walking away while you congratulate yourself for punishing Jason Azzopardi.