The PN is hauling itself towards decency again, which makes the indecent uncomfortable

Edwin Vassallo has been in the PN for many years. He’s never been more tolerant, more enlightened, more respectful of diversity and smarter than he is now. But he knew better than to be so loquacious. He knew he could not get away with expressing his antediluvian prejudices aloud.

Then the PN went through a phase when this people-hating venom became the cocktail of the month.

His reference to Marxism is blatantly ignorant. Marxism has little to do with human rights, let alone the universal right not to be discriminated against on the grounds of sexual orientation.

Karl Marx himself said next to nothing about sexuality, whatever its orientation. There’s one rare episode when a German socialist he did not like was arrested in a park on a morals charge because of a homosexual act. Karl Marx refused to join a committee defending Jean Baptist von Schweitzer and in letters to his friend Friedrich Engels resorted to cheap bathroom humour at von Schweitzer’s expense. If anything, Karl Marx was probably about as homophobic as Edwin Vassallo. 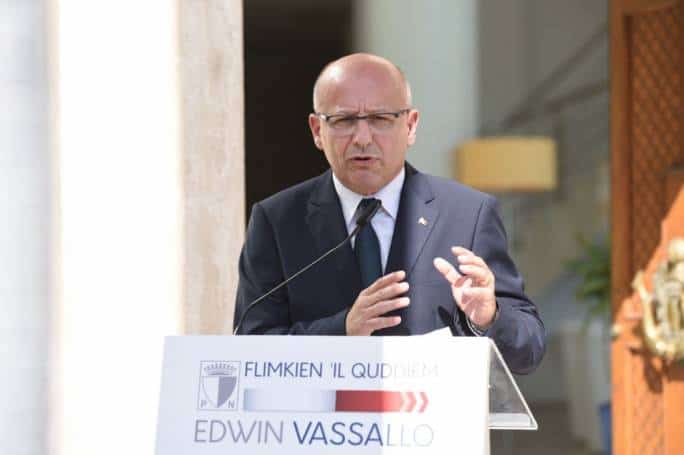 Commissioner Helena Dalli belongs to a European Commission that has finally accepted a long-standing campaign by the European Parliament to warn EU member states that they can’t expect to continue benefiting economically from membership in the EU if they abandon the most central value of the EU: that no one is discriminated against on the basis of a belonging to a category of people.

The PN is the party that led us into the EU and seeing Edwin Vassallo’s proto-fascist and hateful philosophies promoted by the silence of his party over the past three years was a betrayal of the vocation of that party. He was encouraged to let rip with his deepest prejudices. Hating gay people and saying they deserve to be discriminated against was a secret fetish politicians knew better than to say aloud. Instead the PN went mad and nurtured this sort of poison.

But Bernard Grech, the new PN leader, has this morning sent out a signal that Edwin Vassallo’s behaviour is no longer tolerated.

Putting people at the centre of our politics means respecting and actively defending the dignity and fundamental human rights of every individual. With no exception.

I completely disassociate both myself and @PNMalta from comments made to the contrary.

One dares not hope that Edwin Vassallo realises he militates in the wrong party and he rightly belongs with Imperium Europa. But while he stays on pretending to be civilised, one can perhaps dare hope he can go back to bashing the bishop in a dark room on his own. Edwin Vassallo talking is a spectacle only Edwin Vassallo is keen to see.

Previous:GUEST POST: With hindsight
Next:I sat for an interview with Andrew Azzopardi