Now that the Blockchain related laws are in effect, and our vision in making Malta the Blockchain Island is materializing, we can start looking at new economic niches, finding ways to incorporate them in our ecosystem. We want Malta to become a powerhouse of economic innovation. – Silvio Schembri, July 2018 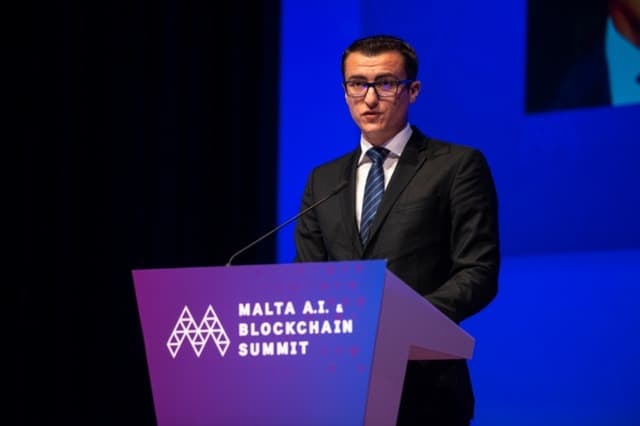 Blockchain is the technology which supports cryptocurrency like Bitcoin. It was built as the foundation of the next big ‘industrial revolution’ offering substantial cost savings and efficiencies to a variety of transactions. Gartner says blockchain will generate an annual business value of more than $3 trillion in ten years’ time. And Joseph Muscat thought he could get part of that.

In April 2017, Joseph Muscat’s cabinet had approved a blockchain strategy. With the usual pomp, the soon to be disgraced prime minister announced that Malta was one of the first countries in the world to have a national strategy. That was fine with him as he always said that he wanted Malta to become the best country in Europe and the envy of the world. He said that blockchain’s uses were only just being appreciated and they ranged well beyond financial services to land registries and health records.

Speaking during a conference on possible new growth areas for the local economy Joseph Muscat said that “having a strategy would encourage investors to come here. Malta could be a trailblazer in this sphere. We need to be a frontline country when it comes to this innovation.”

According to Joseph Muscat Malta was to gear up to become the ‘Silicon Valley of Europe’, be one of the pioneers to embrace this innovation by being the first European country to regulate the industry.

In July 2018, Malta was indeed one of the first countries to enact a regulatory framework for blockchain technologies and cryptocurrency. This made the country a hotspot for the industry, the ‘World’s First Blockchain Island’, a regulated haven for companies operating in the industry.

Joseph Muscat said that the sector could prove more important than iGaming (‘I am much better than the Nationalists’). “These blockchain operating companies will be coming to Malta because of our innovative regulatory structure that is the first, and I think the best, in the world.” Here we go again – the best.

Malta’s glorified ‘Blockchain Island’ dream came to a sudden, abortive and unexpected end. Around 70% of the companies that gave notice that they will form part of the island’s pioneering legislation have never requested to be licensed. In fact, 57 companies which in 2018 set up shop in Malta to enter a transition period before they could be licensed did not give formal notice to start official licensing more than six months after the deadline expired.

And now Clyde Caruana, the newly appointed Finance and Employment Minister has told Lovin Malta that Blockchain will not happen: “Traditional banks have written off blockchain at its early stages. There’s always the potential but if we want to make it happen, there must be more work. The banks must be convinced that this is something that can really happen. Unless they are on board it will be very difficult.”

With banks increasing their restrictions and regulations to combat money laundering, thanks to Joseph Muscat and his crooked friends, it is dubious that this will happen in the near future.