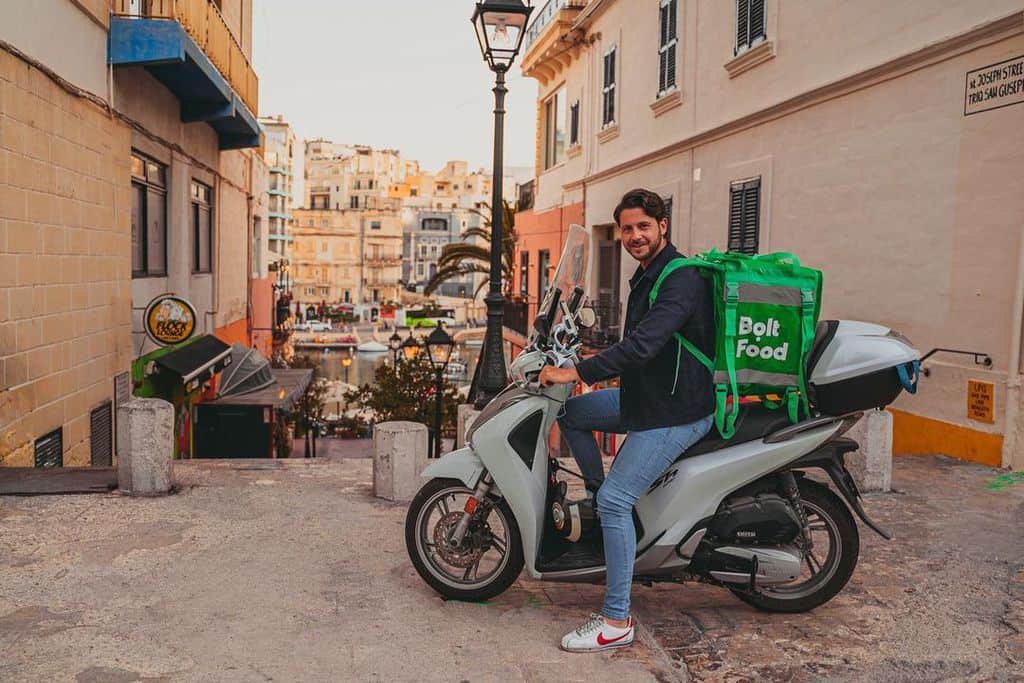 Read this story on Times of Malta about South Asian bikers delivering your Bolt/Wolt food orders. They are overworked and underpaid. They don’t have enough time to rest. They’re made to pay for their employer’s business costs. If they want to keep up their income they must work even if they’re sick.

The job is hard and so poorly paid nobody local wants to do it. By local I don’t just mean Maltese. It would be far cheaper to hire a European than it is to import a South Asian who doesn’t already live here. There are many Europeans whose income expectancy is lower than a Maltese minimum wage and yet most people can find better value work than delivering your takeaway order.

Times of Malta interviews one of the subcontracting agencies that provides labour to Bolt and Wolt. This specific agency claims to be practically alone in employing its drivers on terms that are compliant with the law. They say their employees prefer to work for the other shadier subcontractors who exploit the employees’ need of cash. Instead of insurance cover and tax deductions they get cash for informal, illegal labour.

But no one enforces the law. The government department that exists to ensure the law is respected issues “guidelines” like it was a religious organisation urging you to be nice. That’s like issuing guidelines to people not to purchase slaves. They need to do more than that and slaves telling them they like the boss should not stop them.

One can draw two striking conclusions from the present reality: that the lack of law enforcement means that poor people are allowed to sell themselves into slavery for a pittance and that when the job is structured within the limits of the law, the take home pay is insufficient even for a South Asian at the bottom of the employment food chain of this market.

In other words, it is more lucrative for the employees to work without the basic protections we take for granted because they’re made to choose between having enough to feed their families when they’re healthy or getting paid sick leave when they’re not.

This is not just down to exploitative employers.

It is an indicator of what we feel is our entitlement as white people living in Malta that we have brown people rushing around bringing us hot food to our homes and pay them a few euro for the journey. Sitting in Valletta I can order a hot meal from a kebab house I like in Naxxar. It will be delivered in less than 30 minutes and I will pay the handsome sum of €4.34 for this privilege.

That sum — €4.34 – is so miserably small that it is too little for any white person to do the job. Instead, we fly in people to do it, thousands of miles from their families which they must still provide for and feed after they somehow pay rent in Malta. While the price I pay for getting a Bolt/Wolt delivery remains low, the price of the restaurant bill that Bolt/Wolt deliver to me goes up because raw material – food – is more expensive. Perhaps we need to clarify that even slaves must eat which means that they must spend more out of the pittance we pay them in order to survive.

If the delivery costs on Bolt and Wolt were to rise to a level where the drivers would get a decent pay even after the app owners, the labour sub-contractors, and the restaurants make their profits, it is likely that the insane frequency with which these services are being used would have to go down. Instead of a luxury the employees who deliver could not afford, it would become what it should always have been, a luxury we as its consumers cannot afford.

If that were to happen, we’d suffer. We’d suffer having to feel a little less like the plantation owners with armies of black slaves cutting their cotton or mining tycoons with children shuffling coal a several dozen feet below ground as they counted mounting profits. We’d miss this new found luxury of not having to walk to a Valletta kebab house that prepares the food I don’t want to cook.

Right now it has become a right to have our food delivered to us for close to no money but that right only exists because we forced the drivers to renounce their right to decent working conditions.

The Times of Malta headline says that “solving the problem is complex”. It really isn’t. It only feels complex because if the law was enforced and all employers were forced to pay their staff a decent salary on legally compliant working conditions, the price of deliveries would go up and some who today can afford so many deliveries will then afford less. That’s not complexity. That’s how a fair economy that protects the vulnerable works. It would be cheaper to run our banks with underpaid clerks flown from Malawi. But we accept that if a bank is going to employ a clerk (from Malawi or from Mosta) they must pay them a decent salary. The principle applies to food delivery bikers as well.

You see, it is not just Bolt and Wolt. There’s much work we think is beneath our dignity now. East Europeans wait tables. Brown people deliver food. Black people wash the dishes or clean the floor or fall from heights on building sites. We are erecting a pyramid of underclasses deprived of basic rights so we can feel rich by not paying them the value of their work. It is by making them poor that we allow ourselves to feel rich.

Unfairness of this scale, especially when it is drawn on top of such glaring racial lines, cannot last forever. If the lower classes dare complain we’ll punish them for their ingratitude and send them back to their country to replace them with more acquiescent two-legged beasts of burden.