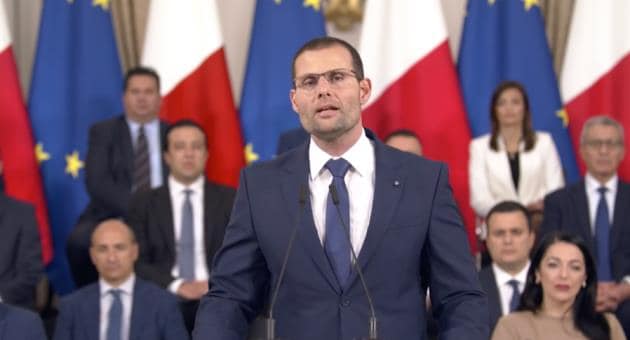 In April 2020, in the midst of the paranoia at the start of the COVID outbreak, the existence of Repubblika, then formally more than a year old, was finally recognised by Prime Minister Robert Abela and his government. He was never publicly heard to pronounce the organisation’s name before then. It was as if it didn’t exist even though he could, frankly, acknowledge the fact that he was prime minister, at least in part, thanks to the protests Repubblika led just a few months before forcing his predecessor to resign and make way for him.

And it wasn’t just an incidental reference in the midst of something else, either. The prime minister lined up all his government ministers behind him and stood at a lectern looking deep into a camera lens like a sweaty, gun-slinging, Sergio Leone villain. He ordered the 8 pm news on the national TV station interrupted so he could address the nation and respond over a TV platform the heads of governments of countries disposed to do so use to declare war.

With the same solemnity as if he was giving the Soviets a deadline to withdraw their missiles from Cuba, Robert Abela reacted to a police complaint filed by Repubblika against his government and a group of soldiers manning a Maltese military ship alleging that their actions and their decisions had caused 12 people to die at sea and risked the lives of many others with an act of sabotage in waters under Malta’s search and rescue responsibility.

Our complaint was subsequently reviewed, in record time, by Magistrate Joseph Mifsud who found the government had done no wrong. There are many reasons to be critical of that inquiry (read about it in this series) but that is not what I’m writing about today.

I want to write more broadly about the reaction of the government at the time and the way they mobilised the public to react. Although the government did not explicitly use the word, their counter-charge to Repubblika’s accusations at the time was that we had committed treason. They did moan about having been, as ministers, subjected on a personal basis to a criminal complaint asking for an investigation of their collective decisions as members of the cabinet. But that wasn’t the main thrust of their reaction.

Instead, they ducked behind the soldiers on the navy ship who were also the subject of the complaint. The rhetoric used was straight out of the Munich Beer Hall Putsch. Our brave soldiers, risk all on our frontlines protecting the fatherland from the invaders. That’s while an evil, entitled, elitist minority within, stabs them in the back. Repubblika collaborated with the invading enemy, the disease-carrying African, undermining our heroic defenders as they struggled to keep pestilence out of the country.

I know it sounds like I’m being hyperbolic. Perhaps we already forget the mood then, less than three years after those first few panicked days of lockdown, when we hung to every monotone pronouncement by Charmaine Gauci (remember when she was a daytime TV star?) and counted the dead as yet without the ambivalence of a Pythonesque undertaker. It was like we could smell the sweat on the sickly horseman of the apocalypse.

The government could get away with this la patrie en danger crap. And its maniacal supporters relished a scapegoat. The migrants of Ħal Far were locked up inside with armed guards policing their detention. They were prevented from reaching their jobs, even in economic activities that white people were allowed to continue through the lockdown. Their meagre incomes were halted and they were forced to scavenge in an overrun jungle of depravation and despair. It was a concentration camp in all but name.

Meanwhile the paranoid rhetoric fanned by the government and carried by the TV media it owns or controls was amplified and made even more explicit by vigilantes, a home front Dad’s Army without the endearing senility. In the febrile panic a man whose claim to fame was keeping wild cats of the Savannah in his back garden rose to relative prominence mounting threats against the traitors and organising flower-throwing events to glorify the army that would have looked like overkill in 1970s Alexander Platz. 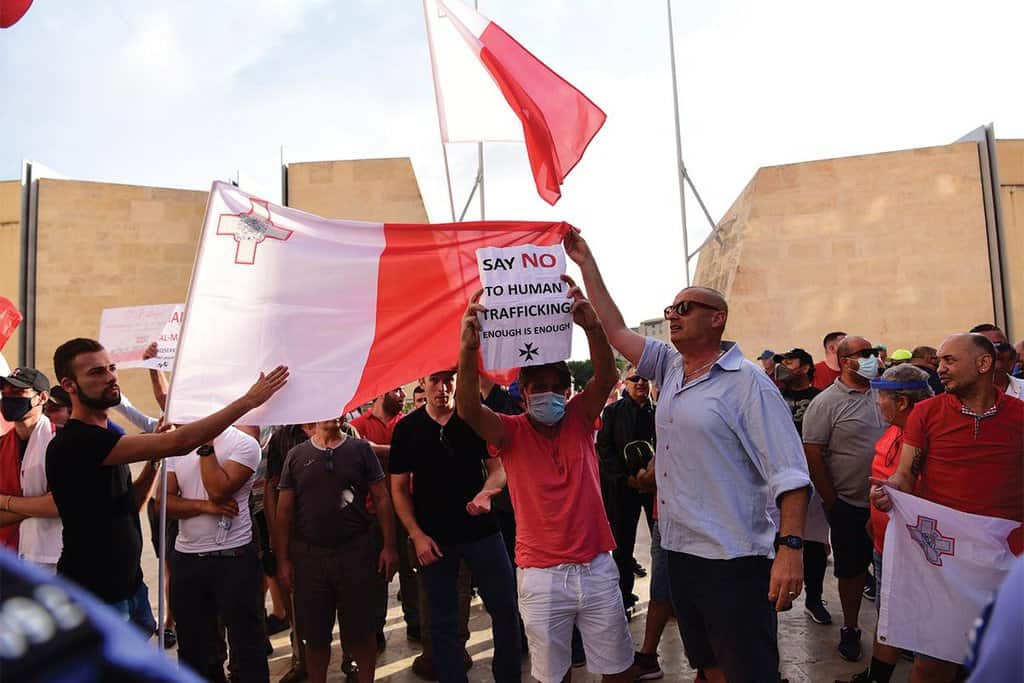 The wild-cat jailor and many of his supporters got on their phones to weed out the traitors. There wasn’t much meeting on the street at the time but some Repubblika activists with a public profile were at the receiving end of heckles and randomly tossed bodily fluids while on their daily constitutional. The local police, then led by Lawrence Cutajar, bless, was concerned enough to send regular patrols by police officers to the houses where the dissidents lived.

There was another screw the government turned to increase the pressure on the fifth columnists. Repubblika was arguing about the wrongful, sometimes deadly, treatment of migrants trying to make it to our shore. The government put a metaphorical gun to the heads of migrants who had made it here. They found ways of passing the message that NGOs and lawyers working for migrants living here would find it harder to help their clients. They used survivors as hostages to silence any claims made on behalf of the drowning. It was as if sailors on lifeboats from the Titanic threatened to throw survivors overboard if people struggling in the water tried to join them.

The covid atmosphere brought out the worst in people, their prejudice, their ability to prevent themselves from empathising with people wanting nothing more than to live, their surrender to the paternal protection of people in uniform and people in authority despite their misgivings about their conduct. But the worst in people is within people whether it is being brought out or kept latent by circumstances.

We can no longer portray people on boats in mediaeval generalisations that equate human beings with disease and pestilence. And yet the chilling effect of that April 2020 reaction is still with us. It remains a taboo to question in any way the conduct of the army out at sea. Any suggestion of oversight by judicial or executive authorities is shunned. In practice, there is no functioning law that properly governs the conduct of ‘our defenders’ except the effectiveness of their actions to secure the only objective that matters: divert migrants away from here, whether that’s back south, or towards Italy where we would rather the ‘problem’ is dealt with.

This is wrong. Our obligation to respect human rights does not stop on our shoreline. It does not even stop in our territorial waters. Wherever we send our army, we as a country go too, and there also go our legal and moral obligations.

Not all human rights outrages result in the death of children. Thankfully those are rare. The more regular outrages result in the cruel brutalisation of children, their scarring for life. Consider this week’s case where a mother giving premature birth to her fourth child was forced to take greater risks because Malta’s offer for her rescue was conditional on her separation from her three older children.

I know, it is almost too easy to cross reference this with the moral panic at the notion of terminating a pregnancy that poses a risk to the mother’s health. But let’s not restrict our challenge to people who throw themselves in front of a bus to “save” a newly fertilized human egg and say nothing about a government that forces a mother in labour to choose between the three children she has brought up and the baby that is coming too soon because of the grotesque conditions she’s been forced into. The pathological indifference is nearly universal.

The fact is we are dealing with these very human situations without distinguishing them from any other ‘security risk’. We send soldiers trained in combat and border defence to deal with situations that need expertise ranging from the medical, to the legal, the social, the psychological, the linguistic, and the cultural.

We can’t have social workers manning the patrol boats and the spotting planes of our army, I grant you that. But we need systems of civilian oversight, public scrutiny of protocols in situations that require less guns and more basic human empathy. I am not for a minute wanting to suggest that soldiers, even our soldiers, are not capable of empathy. I am saying that the ones who are really betraying them are not the activists and the NGOs pointing out their unlawful actions but the ones ordering them into unlawful situations and actions that are only possible because they are happening out at sea.

We have no law to protect soldiers who blow the whistle on unlawful actions they are ordered to do by their superiors. If they do want to speak up, their only option is to lose their job in disgrace, to draw the ire of a government and a people so quick to accuse its detractors of cowardice or treason, and to risk the severe penalties that come with that.

And then we have mothers, children, babies, born and unborn, boys and men who want nothing but the ability to send some money to the women and children they left behind, gulping sea water and asked, while their arms are stretched out, if all their papers are in order.