Not a Jedi moment. 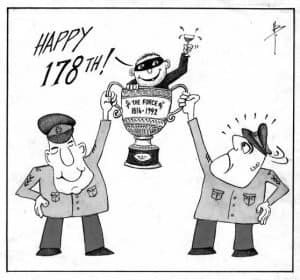 The episode this week of a police officer caught smuggling people in breach of border rules at the airport is an inevitable warning. It is also an inevitable consequence. The government’s decision to engage, promote and re-instate people with criminal records in the police force was never a good idea.

There was no policy reason for this. This was no soft-hearted rehabilitation initiative. Nor was it the political version of ‘to catch a thief’.

It was cronyism promoted from the unfair, up the way of absurdity, to the point of public danger.

This was so manifestly mistaken that the consequences hit back within months.

The Malta Independent’s editorial two days ago summed up the arguments succinctly.

And here’s a comment removed from the comments board under that editorial and sent to me by quickmick408:

“Just the other day a 67year old Police sergeant was removed from duty
for escorting people with dodgy documents through the airport bypassing
international checks.
You have to ask,
What is a 67 year old reinstated policeman who was the duty Sergeant at the airport doing in such a responsible job?
What training if any, has he had in managing a serious incident at an International Airport?
Why at 67 is he even working in the Police force?
How the hell would he manage a serious terrorist attack at the airport?
When is his court case for breaking international and local laws pertaining to immigration into Malta?
Has he been suspended without pay and will his pension be forfeited if and when he is found guilty?
NO I HAVE ABSOLUTELY NO FAITH IN THE POLICE FORCE.”

May the force be with you.

The Cartoon is by Steve Bonello from 1992.