The lawyers you pay

This morning’s report in The Sunday Times (see below) about how Joseph Muscat reacted after he, his wife, his assistant and two of his ministers received uncomfortable questions ahead of the book that comes out tomorrow, is important.

It shows a prime minister who has learnt nothing and refuses to learn anything.

Our letters were sent to five individuals, four of them temporarily heading departments of government in elected office. The fifth has no official role in government at all. ‘Spouse of the prime minister’ is not a job even if you’re raking it in pretending to work in a wet suit.

The questions the five were being asked were connected to allegations of wrongdoing and corruption. Here’s all they did wrong.

First, as you will find out when you get the book we’re launching tomorrow, they did not reply to the questions they were asked. The response we received as authors was as immaterial as Joseph Muscat’s recent response to Jacob Borg when the journalist asked the prime minister questions about 17 Black and the prime minister said ‘he had already answered everything’. When of course he hadn’t at all. And saying he has is just another lie.

Second, they replied collectively but they’re not all being asked to react to the same thing and they do not have collective responsibility for the same wrongdoing. There’s no such thing as the original sin of corruption nor is there a blanket, collective absolution from it. So, Konrad Mizzi has no place replying on whether Chris Cardona met one of Daphne’s alleged assassins. And conversely Chris Cardona has no place replying on whether Konrad Mizzi stood to collect bribes from 17 Black.

Asked by The Sunday Times to justify why they hired a firm of lawyers acting on instructions from “the government of Malta”, a government spokesman said today that “the government has a duty to protect the integrity of the country”. It does, but that’s neither here nor there.

It wasn’t the integrity of the country that was being questioned in our questions, was it? We weren’t suggesting that any Tizju from Kerċem or Sempronju from Bubaqra was somehow guilty of collective responsibility because Chris Cardona spoke with assassins and Konrad Mizzi collected bribes from an offshore company.

If an insurance salesman is caught shoplifting in a supermarket, the insurance company is not required to defend the integrity of all its other employees.

Fourth, because they did not hire their own lawyers to speak for them but instead hired lawyers to speak for “the government of Malta” as if Joseph and Michelle Muscat, Konrad Mizzi, Keith Schembri and Chris Cardona on the one hand and the government of Malta on the other amounted to the same thing, there is likely the added convenience (from their point of view) that the legal costs will be paid for by the tax-payer.

Not only they give no account of themselves, not only they equate themselves with the government some of them are temporarily hired to run, not only they think the mess of their own reputation is equivalent to the entire country’s, they don’t even pay for their own defence. They get the country to pay for it.

Fifth, if they’re going to get legal representation for the government of Malta why did they not issue instructions to their in-house counsel – the Attorney General – whom we have to pay a salary to anyway? Or if they needed to outsource, why could they not find any law-firm or any lawyer in Malta? Why not hire their rabid baby-eating Rottweilers they usually resort to: the Pawlu Lias and the Aaron Mifsud Bonnicis of this world?

Ma tarax. They forget Daphne’s reaction when Mischon de Reya sent her intimidating letters on behalf of Henley and Partners with the express blessing of “Keith and Joseph” and assume that somehow by getting a letter from Carter-Ruck my co-authors and I are going to quake in our boots. 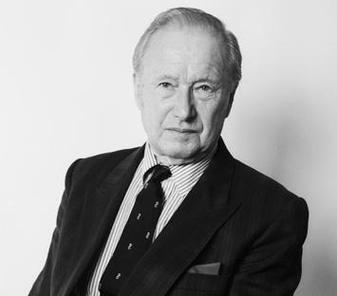 Carter-Ruck are proper bullies, we know that. They are affectionately known to Private Eye as Carter-Fuck. In this satirical post from The Daily Mash “everyone” was told to expect a letter from Carter-Ruck “telling you to shut it right now or they will have your house”.

This is how David Hooper of The Guardian eulogised the libel firm’s legendary founder Peter Carter-Ruck: “The libel lawyer Peter Carter-Ruck, who died on Friday, had a chilling effect on the media. He was a chancer, out for the maximum fee. And he did for freedom of speech what the Boston Strangler did for door-to-door salesmen.”

“The government of Malta,” Carter-Ruck’s latest in a serious of vicious corporate clients that include Trafigura, the Church of Scientology and Condliffe Hilton among others, will take comfort in realising that its completely unsubtle message has been received.

It will use any amount of tax-payers’ money to bludgeon the press into silence or, to use the way The Guardian had put it some years back, “to have a chilling effect on the media”.

You, on the other hand, may take comfort in knowing that we are still warm enough to publish our book tomorrow.

The best way to “protect the integrity of the country” to borrow the government’s self-aggrandizing and pompous rhetoric is to show that for every cowardly government minister who rushes to use your money to cover up their wrongdoing, there’s a journalist ready to pry it open anyway.

Incidentally, will someone ask the government of Malta how much Carter-Ruck charged us to get out of bed to write us this letter? Something tells me Pawlu Lia and Aaron Mifsud Bonnici would have been prepared to put in far more hours for the same fee. 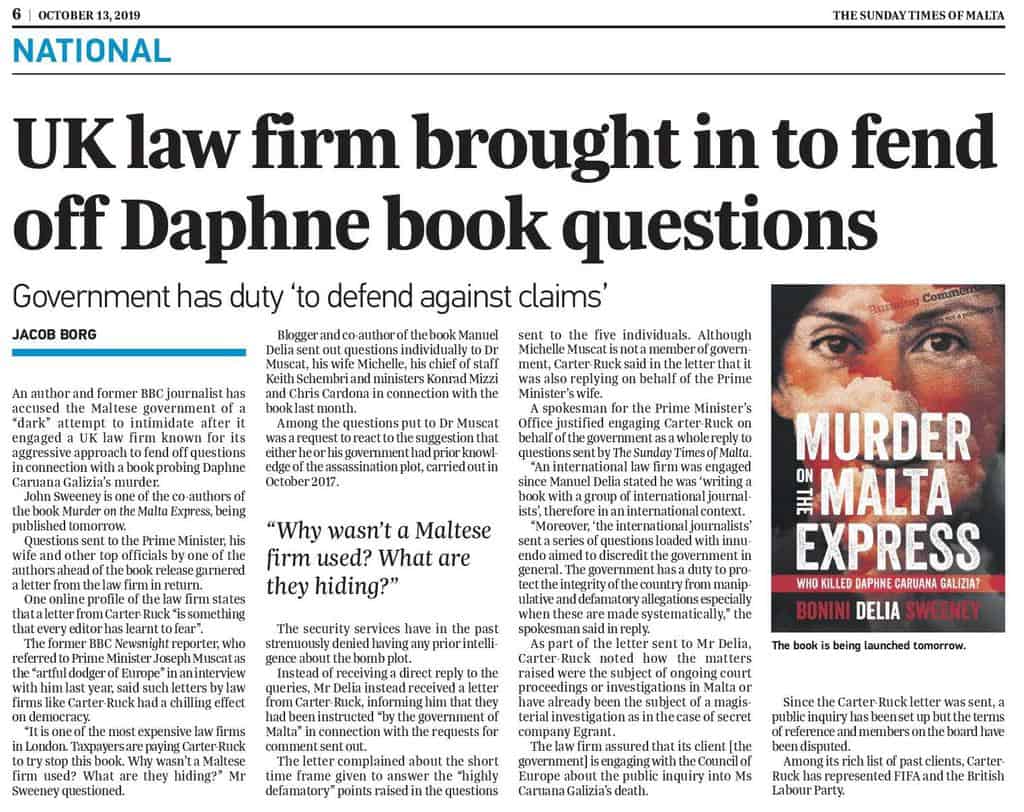 Previous:THE SUNDAY TIMES: All concerned deny any wrongdoing
Next:In case you missed it