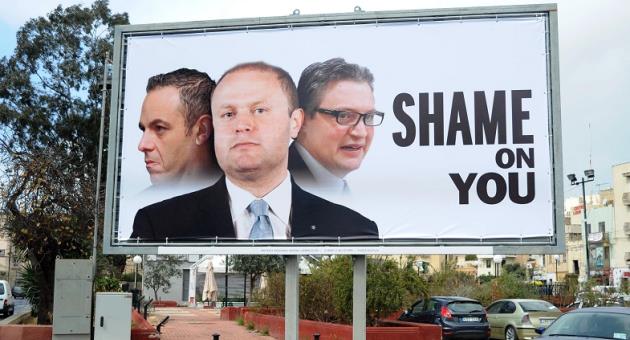 At the eleventh hour of the eleventh day of the eleventh month of 2019, we found ourselves at what may very well turn out to be the beginning of the end. We were in Magistrate Axiak’s court, into which a couple of hours earlier, Keith Schembri had strode, flanked by his pretty high-powered legal team, prepared not to answer even a single solitary question in cross-examination in the case he had filed against Simon Busuttil.

They looked, as these people always look, supremely, arrogantly, confident: they were in government, elected there by a swingeing majority, and no-one and nothing could stand in their way. They were imperial and let no mere mortal look upon them.

They reckoned without the tenacity of Simon Busuttil and the Magistrate’s calm and understated respect for the rule of law. Every manner of evasion, every reason not to subject his oath to the test, every squirming wriggle Keith Schembri tried to pull was turned down and when, almost literally, he was dragged kicking and screaming to the point of having actually to answer a question, he ran, tail between his legs.

Keith Schembri withdrew the libel case he himself had started against Simon Busuttil, when the latter had impugned him with nefariousness in connection with 17 Black. In strict law, a region inhabited by people like Roberts Abela and Musumeci, for whom technical legality trumps ethical necessity, merely withdrawing a case does not translate to an admission of guilt.

In law, maybe, but in politics and the court of public opinion, the one so favoured by specimens like Schembri’s puppets when they play to that gallery, it was tantamount to his kneeling in front of the memorial to Daphne Caruana Galizia, mere metres from the scene of his abject retreat, and signing a full and frank confession.

His glare in the direction of Simon Busuttil’s side of the court, where I was honoured to be standing, as a spectator, said volumes. Contrasting with his supercilious sneer at the start of the day, the venom failed to mask the appearance, behind his eyes as it were, of Schembri’s dawning comprehension that he wasn’t, actually, omnipotent.

Events since that fateful day, looked at with the benefit of 20/20 hindsight admittedly, tend to confirm that the mighty have, indeed, fallen crashing to the ground, with what might very well turn out to be the gates of Hell gaping open to welcome them.

Konrad Mizzi also resigned, even if he wasn’t mentioned by Theuma in connection with the assassination, not even to the extent that he felt framed by him, and has since disappeared from public view, and this not only because of the power-cuts resulting from his utter misreading (yeah, right) of his costed and plotted roadmap for energy (read cash) generation.

Why did Mizzi resign? Search me, but maybe his involvement in the 17 Black, Tillgate, Hearnville, Macbridge, Electrogas, GEM and Yorgen Fenech (not to mention Siemens, the Apap Bolognas and the Gasans) fried spaghetti omelette (froġa, it loses something in the translation) prompted him to remove himself from public view with some speed. Calling the affair a “froġa” trivializes it, I know, it’s like calling that other major scandal (VGH/Vitals/Steward/hospitals) in which Mizzi had a revolting trotter a small mess.

Those power-cuts, of which Enemalta has promised more, are more than a bloody inconvenience: they are proof positive, to anyone who thinks, that the collaborators listed above have a very, very strong case to answer as to what, exactly, they got out of all this and why.

Within days of 11/11/2019 the country found itself bereft of whatever it is that Schembri and Mizzi were doing to it – not for it, that measure was Sai Mizzi’s suggestion as to why she was worth €13,500 per month of our money – but to it and for that, if nothing else, we must give thanks.

We weren’t deprived, really, because Schembri was – and still is, he’s got himself another phone – being kept abreast by his minions on what his other minions are doing and Mizzi is hardly likely to be lounging around doing nothing.

Joseph Muscat, meanwhile, tried to make us believe that he was keeping his long-made promise (like he has a reputation for keeping them) that he would be leaving soon by telling us that he was leaving soon. He should have walked the minute his protégés Schembri and Mizzi were dragged blinking from under their fetid stone, but being oblivious to the notion of doing the right thing, Muscat told us he would leave (some time) after Labour elects a new leader, in early January.

He will leave comforted by at least a couple of rather fine timepieces and the memory of some equally fine Petrus, slipped his way by Yorgen Fenech. I doubt that is all that will comfort him.

Muscat is leaving in disgrace and his pilgrimages to the epicentres of Christianity, Judaism and Islam don’t change this one iota. His lightning trip to Dubai, evoking memories of John Dalli’s flying visit to Bermuda back in the day, was perhaps less a pilgrimage than a business trip. Schlepping all the way there and back in three days for a holiday in the winter wonderland that is Dubai is hardly the stuff of which dream breaks are made.

And now he’s off to London, for as much a discernible reason as the other three trips – though London being the financial centre of the world (up to Brexit, anyway) might have something to do with it, I am morally convinced.

The decade comes to an end with our national reputation in tatters, with the Sicilians calling us Mafiosi, with links to the ‘Ndrangheta becoming clearer by the minute, with scandal after scandal reverberating in the local and international media, with the government’s crypto currency ambitions (perhaps thankfully) crumbling into dust and with the gaming and financial services industries feeling seismic life-changing tremors.

The decade comes to an end with Daphne Caruana Galizia dead, brutally murdered by vicious scum who believed and perhaps still believe that their lust for power and money entitles them to dispose of people like her as and when they like.

All the while, the trolls and minions directed by Castille lap it all up, muttering about previous power cuts, other deaths, cheap and tawdry clocks and whatever else is put in front of them to make them forget that Joseph Muscat was surrounded by crooks and thugs and was, at best for him, unable to rid himself of them, to the extent that he had to run, perhaps to hide.

It remains to be seen, as 2020 dawns, whether they will get away with it. Fearne is going to have a list of people to have a look at that is as long as Neville Gafa’s CV, if his promises are to be believed. Perhaps he’d better concentrate on that, rather than making silly promises about free parking in a car-park that is pretty impossible to park at, on most days.