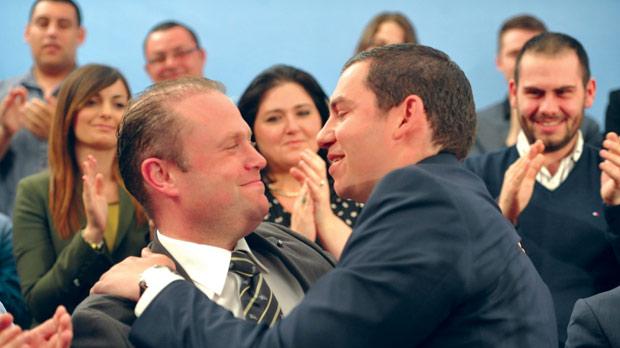 Cyrus Engerer made it to the European Parliament at last. It was a long walk that started back in 2014 and now that we’ve been made to watch this timelapse movie, here we are having to watch that stupid smirk on his face, thankfully behind a mask.

When June 2018, Cyrus Engerer announced he would be contesting the elections that saw him declared an MEP today, I had written this post:

His withdrawal from the candidature was hailed by Labour’s Joseph Muscat as heroic. Indeed he endowed a former PN Councillor with a serious pending criminal accusation with the honorific ‘soldier of steel’, quite possibly the highest honour bestowed by the Labour Party on anyone.

But the Labour Party feared backlash at the time should Cyrus Engerer be on their ticket.

They still owed him for abandoning the PN so they arranged a paid Brussels job for him and his boyfriend.

He remained in his important Brussels position practically as an ambassador of Malta until he had had enough and returned back to Malta to continue where he left off: he’s going to run for MEP.

I should imagine the Opposition is just as indignant at Cyrus Engerer’s candidature now as it was five years ago, though I have yet to hear their complaint.

The complete and utter sense of impunity of a government that feels untouchable. The fact that since 2014 we now know people in elected office include tax dodgers, fraudsters, inveterate liars and suspect there are murderers as well. What’s a revenge pornographer going to be in the general scheme of things?

I should hope no one will argue, except Cyrus Engerer if he bothers, that Cyrus Engerer has paid his political price by not running in 2014 and has now served enough political consequence for his criminal infraction.

His candidature is yet another symbol of the downward spiral of standards. It’s starting to look like crime is a pre-qualification for Labour Party politics. You need to prove you’re rotten before you even start in order to live up to the high expectation of rot when you actually get down to business.

Now it’s official. Malta’s 6-strong delegation to the EP includes someone with a two-year prison sentence on their CV. This will help us convince the world we’re not all a bunch of crooks after all.

Previous:Read: “It’s not a sin to talk about migration”
Next:GUEST POST: A narcissist for a Prime Minister