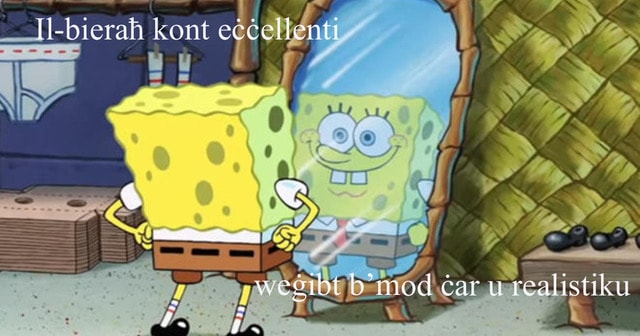 Superiority complex is a term used to describe people who compensate for feelings of inferiority (feeling like they’re less than other people, not as good as others, worthless, etc.) by acting in ways that make them appear superior. They do this because controlling others may help them feel less personally inadequate.

Malta is a very lucky island. I would give St Paul most of the credit for this because I think that before he left our shores to travel to Rome, he must have blessed the islands. But it looks like recently we did something wrong as Paul is frustrating our lucky streak. Of all the possible leaders this country could have had, we have a big-headed narcissistic, retired bodybuilder as premier. Before him, we were blessed with the most corrupt person in the world, the one who called himself Invictus. But he came crashing down and disappeared into nullity, at least until justice reaches him. Today we have a boy scout instead. Unfortunately, he has a textbook case of infantile inferiority complex.

Robert Abela reminds me of one Donald Trump who is always complimenting himself as being ‘the best in the world’: ‘I know everything about science, literature and computers’; ‘nobody knows more about the China virus than me’; ‘I’m intelligent. Some people would say I’m very, very, very intelligent.’ The leader of the free world told the world that Covid-19 was all a hoax. It does not exist, and for a long time refused to wear a mask, just like our Bobby.

Robert Abela thinks that it is only bad if you hang out with Yorgen Fenech after he became known as one of the murder conspirators of the assassination of Daphne Caruana Galizia. For him, it is fine if you were in a position of power and you handed Yorgen Fenech the whole country on a silver platter.

It looks like our prime minister needs to take the deaths of 70 people more seriously. These are not numbers, Bobby. These are not marks in an exam or credits in an assignment. These were real people, men and women, fathers and mothers who left behind children and grandchildren, brothers and sisters. Do stop playing with our lives, for pity’s sake.

Robert Abela has defended the MFSA chief Joe Cuschieri saying that there had been no conflict of interests. At the time of the Las Vegas trip, Joseph Cuschieri was moving from the Malta Gaming Authority to the MFSA. He and two women were the guests of Yorgen Fenech. Joseph Cuschieri and Edwina Licari suspended themselves over the trip, yet Robert Abela does not think that cavorting with Yorgen Fenech in Las Vegas was a grave matter. He did not have the balls to kick them out but waited for their self-suspension. But then he did, guess what, another U-turn and said this was not right.

Our Robert Abela is just like a spoiled eight-year-old brat in a schoolyard showing off because he is taller and bigger than his friends. What a conceited arrogant Prime Minister. After ‘Invictus’ we may be having an ‘Eccellentus’ on our hands. Bet he will consider tattooing it on his muscled biceps.

Mr Prime Minister, you are pathetic, to say the least. Was it really you who praised yourself on Facebook about what a great job you did during an interview on a TV station, or was it some cretin you hire to keep your Facebook posts updated? If it was the former then your power must have gone to your head much too quickly. It has been only 10 months. If it was the latter do the right thing and fire him, now. Makes you wonder on how many ‘prosit ministru’, ‘well-done minister’ or ‘keep up the good work’ posts on Facebook are real or fake. No wonder members of the cabinet are all being investigated for the misuse of Facebook.

Robert, instead of praising yourself for a good talk show, ensure that all those incompetents and criminal people Joseph put at the helm of all the institutions are removed without further ado. Jason Azzopardi said publicly on a radio station that you have a member in your Cabinet who was involved in a crime. And he said that you know who the person is, and you have known since March. You did not deny his accusations or even mention them during your Sunday homily in St George’s Square on Sunday.

And please do keep this in your mind even when you are looking at yourself in the mirror enjoying your looks and physique: “The higher your rise, the harder your fall.”