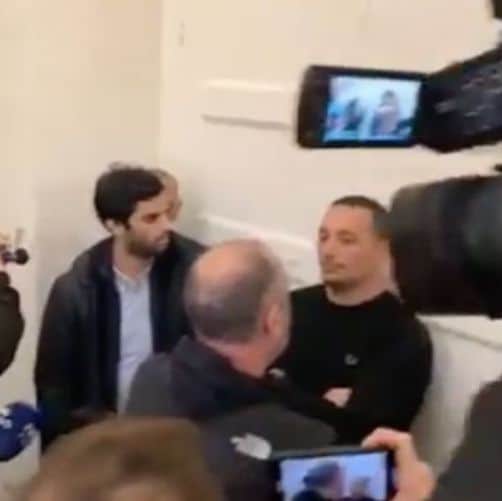 Three men were charged with unlawfully detaining journalists that night of 29 November when cabinet met until 3 am and journalists were then allowed in to hear Joseph Muscat say it took cabinet 7 hours to decide to deny Yorgen Fenech his request for immunity to turn state’s evidence.

While testifying one of the journalists, Monique Agius, presented a copy of a video she had taken. This one.

The court heard the case almost a year after the events occurred and decided on it on a morning fast approaching the anniversary of that fateful night.

Joe Mifsud, who before making magistrate had been a Labour Party candidate, a Labour Party propagandist, and the Labour Party’s international secretary, acquitted the men charged with the unlawful detention of journalists.

They were three men that could be identified in Monique Agius’s video. They had no reason to be in the room. They were not Castille officials, they were not part of the state’s security apparatus, they had no form of official identification. They were gorillas, bouncers, as if Castille was a drug-infested night club.

Joe Mifsud wrote 45 pages of a 46-page decision citing all manner of legal esoterica mainly to prepare for his conclusion that the guilt of the people charged before him had not been proven.

He said he needed to rule on the basis of the evidence given him and that, he said, amounted to the video Monique Agius had handed in. He said the video did not prove the detention lasted 10 minutes or more, as the witnesses had claimed because the video itself wasn’t that long. He said the video did not prove the commotion described by the witnesses because the picture was framed on the locked door and the bouncers blocking it and the dozens of journalists blocked inside could not be seen.

The video was supposed to corroborate what multiple witnesses told the magistrate, not replace the testimony of the witnesses altogether. Joe Mifsud decided to only decide on the basis of what the video showed him and ignore everything the video didn’t show, instead of looking at the video to check whether it sustained – to the extent that it could – the story given by several witnesses.

Indeed had there been no video, would the court ignore the testimonies of the victims of a crime. Must victims not only have video evidence of what they claim to have happened to them, but that video must also last the entire duration of the incident and taken from sufficient angles in order to allow the magistrate to, in his own words, orientate himself around the room?

If someone charges you with a knife in the middle of the night, do you tell them to repeat the stunt so that you can film their close-up in a good light?

The magistrate says the prosecution failed to prove who gave the order to lock the journalists inside. Why is that relevant? What does it matter if the persons charged with an illegal act were asked or ordered to commit that act by someone else? Why is it necessary to prove who gave an order in order to convict the executors of that order? And what would change if these people who work for no one acted on their own initiative?

The magistrate overcame his determination to ignore anything not visible in Monique Agius’s video by saying that the Ambassadors’ Room where the incident occurred had other doors. It does. How did the magistrate determine those doors were unlocked? Surely, he can’t have done so on the basis of the video given him because the other doors didn’t feature. Or was Magistrate Joe Mifsud referring to the windows, which were likely unlocked, and from which the trapped reporters could have happily jumped to their deaths?

Magistrate Joe Mifsud was clearly determined to acquit the three persons charged with this unlawful arrest of journalists. It had been a politically disastrous incident and the political responsibility for it at least in part lies with senior officials that still work in Castille today. The conviction of the three men charged with this would have forced at least the prime minister’s spokesman to resign.

The evidence against them was crushing and Joe Mifsud knew he would not look good ignoring the video. He, therefore, wrote 45 pages of preventive legal convolution to prepare the rest of the world for the manner of his own defence: blaming the police inspector prosecuting the case, Daryl Borg, for failing to prove beyond a reasonable doubt that the three men charged actually did what the video presented to the court by Monique Agius showed them doing.

This is what state capture looks like: uninformed, undisciplined, unaccountable thugs locking up journalists in a government building to prevent them from asking questions to a disgraced prime minister, and a magistrate of that prime minister’s choice acquitting them while blaming someone else.

Even if no one will actually get a criminal wrap for it, hopefully, this umpteenth injustice is rectified by the Daphne Caruana Galizia inquiry who also heard witnesses about this incident, one of the darkest to ever happen in the Auberge de Castille. Because if not, Magistrate Joe Mifsud has just licensed governments to call in unidentified thugs to lock up journalists inside flashy halls at will.