It takes two to tango ta 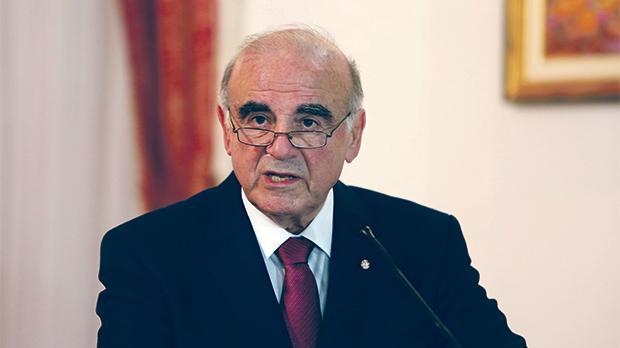 President George Vella has been making public remarks that among other things amount to chastisement for his critics for, as he puts it, spreading the “false impression” that just about everyone in public office is corrupt or somehow compromised and working on behalf of hidden interests.

The president expressed sympathy with people in public office, such as himself, which means to work honestly and without compromise with their conscience, but are treated unfairly by this criticism. He also expressed concern that this wrongful impression that everybody is bad keeps young people away from politics.

He’s obviously not watched One TV much lately.

George Vella looks like he’s taking this personally and is protesting his indignation to whoever is prepared to listen. He made a couple of references to “pulling of strings” that seemed to me to be a thinly veiled response to an article by activist Alessandra Dee Crespo on Times of Malta last week.

I am fast earning a reputation of having developed the unjustified idea that I can tell everyone else how to do their job. I’m not going to do that to the president. But I should think that any ordinary citizen is qualified to say what they hope is the outcome of the president’s job.

The preservation of his personal reputation seems to me to be hardly the outcome we would hope for. George Vella’s defensiveness and self-references are undignified and unhelpful. And his increasingly shrill exhortations to everyone else to bury the hatchet and wake up tomorrow entirely oblivious of the Joseph Muscat years (not to mention his prominent role in them) are making his intentions, frankly, suspect.

But speaking for myself and certainly just about anyone I’ve ever discussed the topic with, George Vella’s conduct now has the potential to transcend the blemishes of his past. Every time he defends his past, he renews it. Every time he stands by himself as he was 7, 4, and 2 years ago, he again stands by Joseph Muscat.

Instead, he should be distancing himself from Joseph Muscat, bridging the yawning divide in our country he rightly complains about. We know enough people from our side of the divide who have stood for justice at the feet of the Great Siege Memorial in Valletta demanding that our institutions punish wrongdoers. It is people from the other side of that divide that we’d want to see.

And since they come from the other side of the divide it would be natural for them to have a past where they have taken decisions and acted in a manner that we disagreed with. Much as they would disagree with our own past.

George Vella spoke in his interview on 103 with Fr Joe Borg about his vote in Parliament when the chamber was asked to withdraw its confidence in Konrad Mizzi after the Panama Papers. That day he voted to retain Konrad Mizzi. We disagree with that. If he voted differently we’d have been spared much grief since then. He certainly disagrees with anyone who voted to remove him, saying that they voted that way without evidence and therefore for partisan reasons.

OK so be it. We can rise about the way he voted if he can rise above the way anyone who disagreed with his vote behaved then and since. After all, he’s the president. It’s on him to get over the divisions (instead of just complaining about them) and without much fanfare joins our call for justice for Daphne Caruana Galizia. We have suggested he visits the Great Siege Memorial to lay flowers and light a candle there.

On the 103 interview, he said he had no problem doing that if he had the family’s permission. At face value that’s fair prudence. There is significance in the fact that he made the offer publicly at all. Until now he’s refused to even do that. So something’s changed and that’s a good thing.

I do not speak for Daphne’s family and do not presume to anticipate their views on the subject.

All I can say is that when the protest in Valletta started four years ago, the act of paying tribute to Daphne Caruana Galizia was and remains among many other things an act of unqualified support for her surviving family. There was no mincing of words, no defensiveness or qualifications about Daphne’s qualities, no ambiguity in our determination to demand from our institutions, justice for her, and justice for the story that she was killed reporting.

Surely, President George Vella should be able to do this. Surely, if he means us to believe that he is not restrained by invisible bonds that hold him back, misguided loyalties to party and support-base, he can bridge the divide at last.

Surely, President George Vella can silence by his actions the real causes of our poisoned national divisions. Surely by his presence and his words he can force One TV to once and for all report him paying tribute to Daphne Caruana Galizia and overpowering the hatred and the prejudice that they sowed for all those horrible years up to her death and the nightmare we’ve lived in the four years since.

Surely, President George Vella can do more about the nation’s elusive unity than anyone of us can, more than his supporters or his critics, more than people in day-to-day politics, or the trolls that think they’re doing their country a service by spreading lies and hatred on Facebook every day.

Not for the first time then, as we ask of any citizen who wants to act for the love of country before love of self, we ask George Vella to stop talking about national unity and act in a way that brings it about instead.

Previous:A people that would not reject the callousness with which they are treated
Next:For the umpteenth time, how are the Fenechs still in the Casino business?