Take out the trash day

There’s no better day for the government to bury bad news than the leadership election in the opposition party. It is indeed remarkable than in the midst of election day, the PN found the presence of mind and the focus to not let Konrad Mizzi’s quite horrific threat to Air Malta employees pass without comment.

Air Malta has been existing on the thin edge between life and death for almost 20 years now. Every day it flies is a small miracle.

But in the real world miracles do not happen spontaneously. They happen because of the hard work of the problem solvers that face facts and find solutions.

On the eve of the opening of air-routes to low-cost airlines, then Minister Austin Gatt publicly told Air Malta it must “change or die”. It was one of those stark quotes that do not gloss over reality. Still for the sceptic who wanted to dodge reality it was convenient to make that advice sound like a threat. Super One spin wanted people to believe that Austin Gatt would kill Air Malta himself if it did not comply with the direction he was setting for it.

Spin is spin is spin. The reality was that structured dialogue with all Air Malta unions initiated by Austin Gatt and brokered by George Abela hammered a rescue plan for Air Malta that is the only real reason the airline is still around today.

Now it’s Konrad Mizzi’s turn to find solutions for Air Malta’s endemic problems. But his impatience with employees was not summed up in a succinct appraisal of reality. It was instead expressed in a shocking and terrible threat that unions either comply with Konrad Mizzi’s diktat or Air Malta is shut down, all its employees made redundant only for the government to set up a new company staffed with people of its own choice.

And we know what that means. Konrad Mizzi and the Labour government have been stuffing and staffing the crippled airline with employees that are in excess of requirement but owed favours and promises by a corrupt government.

A new company in place of Air Malta will be an opportunity for the minister to exterminate anyone who is not a fawning constituent of his and replace them with a state-owned hotel for the terminally labourite. 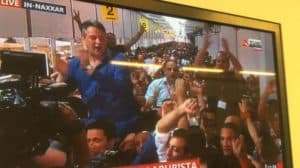 Konrad Mizzi wanted all Air Malta employees to be aware of his threat. But he wanted the rest of the country to be completely distracted by the PN’s affairs to even register the base indecency of his remarks.

In the trade they call a day like today a take out the trash day when governments can make public statements they need to make but would rather not everyone heard.

Another reminder, if any was needed, that the country needs the PN now: not just in 4 years’ time. We need a strong, firm, aware and organised opposition to protect people being bullied, threatened and abused by a government that left decency out of the door when it first stepped into Castile all those years ago.