Despite Joseph Muscat’s best efforts, Valletta is able to celebrate being a 2018 Capital of Culture. Because of Joseph Muscat’s government, what should have been a spectacular opening night turned into a spectacle of mediocrity of cringe-inducing proportions.

We were spared excerpts from “Ġensna” (for the non-cognoscenti, a ‘rock’ opera lauding a Mintoffian view of history) or Mary Spiteri crooning “Little Child”, but it was a close run thing. Minister Owen Bonnici, himself only one of half-a-dozen stuffed shirts delivering “a few words to mark the occasion”, introduced with breathless portentousness by Kevin Drake, set the tone when he started his ‘intervention’ with the immortal words “… dear Prime Minister …”.

Presumably, it was necessary for him to demonstrate his undying fealty for the Spouse of the Volunteer of the Year and the Father of the Infantas de Castille, if I can borrow the descriptor at risk of being accused of perpetrating a heinous attack on the Muscat twins. 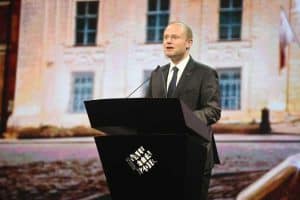 The “Dear Prime Minister” himself, on taking the stage to spout some platitudes, told us that Malta wasn’t going to invent the wheel, charitably amended later by the so-called journalists who dutifully reported the event into not re-inventing the wheel.

He also told us, if I remember correctly, because by now the speeches had morphed into a glutenous blob, that tiny Malta was going to be remembered for the awesomeness of her people, who would be putting a spectacle that would wow the world into thinking that we were a super-power of some sort. And there I was, thinking that we had grown up into a self-confident nation that could look anyone in the eye without having to squeak and bleat continually about how small we are.

Apparently not, and just to underline the neo-colonialist inferiority complex that Labour has shoved down our throats over the decades, the opening ceremony consisted in the band of the Armed Forces in their British Army-style uniforms, being barked at in English by the officer in charge, rendering hackneyed tunes in between excerpts of filmed village feasts, for all the world as if culture in Malta starts and stops on the steps of the band-clubs.

Oh well, when you have things run by Jason Micallef and Deo Debattista, under the watchful eye of Owen Bonnici, I suppose that’s the extent to which you’re going to be at the cutting edge of cultural development, in truth.

No wonder the real movers and shakers of culture in Malta have long ago thrown up their hands in despair that V18 is going to be anything other than an excuse to throw cash at assorted friends and acquaintances, who will supply light-shows, sound-systems, big-screens and all the other accoutrements of flash cacophony masquerading as creative endeavour.

The Saturday evening events in Valletta were described by the TV commentators in a manner which made their commentary as useful as a condom to a eunuch, if I can borrow a masterful phrase I spotted somewhere on Facebook. They failed to give any context. though this was hardly their fault, there seemed to be none.

The whole thing was a mish-mash of plagiarised celebrations from around the world. Interspersed with a “celebration” of a Maltese identity that finds its roots in jingoistic self-praise, describing succinctly, and sadly, what our culture really is, a navel-gazing fascination with shiny bling and sanitised history.

Those cranes really do sum it up.