Maltese people the USA is considering for sanctions

Lovin’ Malta spots three Maltese citizens on a US Treasury list of Putinite oligarchs. They are Russian born. Their business interests are in Russia. To all intends and purposes the adjective Russian would not be inaccurate to describe them. 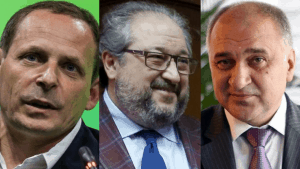 Read some background about them on Tim Diacono’s story and google their names if you want to know more. And here’s a report on the so-called “Kremlin Report” published earlier today that listed the Russians (and Maltese) the Americans are targeting for potential sanctions.

I think we need to pause a bit here. The United States is listing Maltese citizens as oligarchs on which it raises red flags of warning of suspected corruption and likely money laundering. As it does so, Russia retorts that the United States is targeting enemies in peace time.

We have to drop the mistaken idea that these people paid us a million euro to acquire some VIP pass to use the fast lane at passport control channels in busy airports. We are not the Diners Club. We are playing a very, very dangerous game here.

In an emerging cold war between Russia and the United States we are allowing Russian generals to wear Maltese uniforms on a battlefield we do not understand. If the military language sounds like an exaggeration, that is because we persist in that 1990s naivete when we still thought that private enterprise in Russia will democratise it and bring it in the western fold.

That is not the reality of the global stage.

And selling Maltese citizenship in the reality of today’s global stage betrays an unforgivably amateurish and extraordinarily precarious clumsiness that could bring us in rather a lot of trouble.

Have the experts at Malta’s foreign office been asked to assess the international political implications of naturalising Boris Mints as Maltese? I doubt it.

I doubt any careful consideration of Malta’s interests is ever made when the real interests that determine a decision like this is who is making the hundreds of thousands of euro on the back of the sale of Boris Mints’ passport. Are you better off in any way now Boris Mints is Maltese? No you aren’t. But the intermediaries, legitimate and not, and Henley and Partners sure are.

In the meantime the United States, and for that matter Russia, are looking at us with altogether different eyes. I don’t mean ‘us’ in the vague sense of “Malta” as a desk at the UN General Assembly. I’m talking about the way each and every one of us is seen as they cross through an airport passport channel carrying a Maltese passport: the passport of Putinite oligarchs and little old you.