The doctors’ union’s decision to take some form of action in protest at the transfer of three of our hospitals to an American for-profit business we do not know, is as justified as they come. Obviously they will get more than their fair share of venom from the Labour controlled media and from a big chunk of their patients on whose behalf, really, the protest must be made. 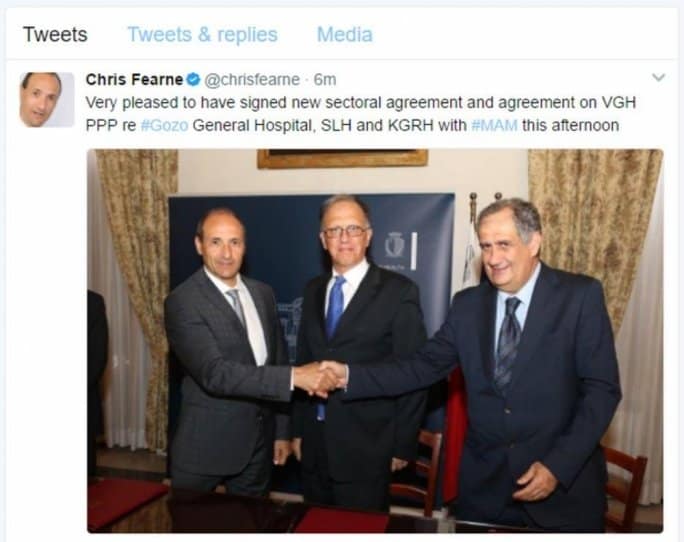 The MAM has to quote its collective agreements and the commitments the government made to it which it is breaching. Since these are industrial relations there has to be some legal justification for action. But these are all pretexts, and I mean that in a good way.

The government does not need to have ignored its obligation to consult to need to be told in the strongest possible terms that its actions are an attack on our people’s right to access to quality medical health care.

The government’s ability to promise a golden future of free world-class services at St Luke’s and Gozo General has been squandered. Like the spouse who has been caught cheating, promises just won’t cut it anymore.

MAM had done its best to make the most of the VGH privatisation. It wasn’t happy with it but since it is not of a particularly socialist bent it did not start principled crusades against the very notion of privately managed public hospitals. Just as an aside imagine what the General Workers Union would have done had this hare-brained idea been concocted by a PN government. But that’s by the by.

MAM patiently gave privatisation a chance. It relied on the signed agreements and commitments and that they were all given in good faith. And after two years in paralysis our health care has made no progress whatsoever.

MAM has also understood that the government values written commitments only in so far as they create the opportunity for stage managed signing ceremonies, broad smiles, soaring music, and fingers of light piercing the night sky from mechanised search lights. Once signed, contracts are hidden and by and large ignored.

In the VGH case the government has the right and the duty to repossess the concession. If it wants to persist in the error of privatising hospitals it could at least give it a fresh start and allow a new crop of bidders to compete. Perhaps this time the right choice may be made.

VGH were by everyone’s admission now the wrong choice. And yet we are letting VGH choose its replacement.

Every one of those premises is laden with debatable complexities being simplified here. But there is no doubt that a failed contractor should not be allowed to profit from its failure and lock the rest of the country with a relationship that could be just as dysfunctional as the previous one, if not worse.

It is patients and potential patients that ought to be taking action on the transfer of the three hospitals to Steward. If you might ever need medical care at any time in the next 100 years – do you really want to say you won’t? – and if your taxes are going to pay for any of this – if they aren’t, you’re doing something wrong – then your interests are being trampled upon by the government’s decision to abdicate its duty to intervene in this matter.

You should be protesting.

If MAM are doing it on your behalf, it is because they are in the thick of this all the time while you would rather not be thinking about needing medical care.

Previous:Illogical neutrality
Next:Maltese people the USA is considering for sanctions