INTERVIEW: The man who came in from Baku (3)

An Interview with the AUM’s John Ryder

This is the third and final part of Lizzie Eldridge’s series based on a 2 hour recorded interview with Professor John Ryder, recently retired Provost of the American University of Malta. Part 1 is here.

In what was described ‘as the biggest pro-environment protest ever seen in Malta’, more than 3,000 people took to the streets of Valletta on 20th June 2015 in protest at the government’s plans to sell off huge tracts of ODZ land at Zonqor for the development of the American University of Malta.

John Ryder, however, who arrived the following year to take up his post at the AUM, pays little heed to such conflicts:

When asked who was delighted, Ryder replied with specific reference to Cospicua:

‘Oh, I don’t know. The local council, for example. We were just with the mayor…we have other people in the neighbourhood. I know people who grew up here…To see this kind of regeneration and investment and so on…I understand that there’s disagreement about that. I fully understand. I’m not an idiot. But it isn’t obvious to me that one side of that is virtuous and the other side is evil. There are disagreements, and disagreements about lots of things, and I don’t get myself in the middle of that and I never have…I haven’t taken a public position on anything. My role here is to build a university.’

A reminder was made that 2 sizeable areas of public land at Cospicua and Zonqor were transferred to Sadeen Education Investments Ltd (aka Hani Salah) following an all-night parliamentary session lasting 15 hours.

‘I haven’t been part of any of that,’ said Ryder. ‘I am part of an institution where that is part of the history of it, that’s true.’

He then resorted to that familiar deflection technique by saying he couldn’t know of some hypothetical scandal 50 years ago in the place where he got his PhD. When reminded that the AUM involves ongoing rather than historical controversy, Ryder at first accepts there was a scandal but swiftly proceeds to contradict this while simultaneously negating any responsibility:

‘There’s a difference between participating in a scandal, I mean, being a player in it, and being part of an institution that even if its history was, 2 years before, was involved in a 15 hour congress debate in parliament over whether or not to give the land and they came to the conclusion was to give it so I don’t see how there’s a moral implication for me or anybody else at the university in that respect.’

He even claims that the first he knew of any controversy was through an article in Inside Higher Education. For the record, Mark S Kopenski, President and CEO of Global Student Recruitment Advisors who features on the AUM’s promotional video in India, is, according to his prolific Facebook posts, also a big fan of Inside Higher Education, but that didn’t put him off working for AUM either.

Presumably he was referring to ‘Is Newest “American U of…” Really American?’ by Scot Jaschick, published on 11 May 2015  which also details DePaul University’s efforts to clarify its role in the process following perceived misconceptions emanating from Joseph Muscat’s announcement to locate a university in the south of Malta.

Coincidentally, Ryder’s previous place of work, the American University of Ras Al Khaimah, where he was working when Jaschick’s article appeared, saw not only mass firings of staff akin to the later episode at the AUM, but also experienced the withdrawal of George Mason University (which gave AURAK its American credibility) after 4 years with no degrees.

Ryder’s interpretation is that ‘I think they went into this because of dollar signs…It wasn’t financially viable for them so they left.’

Oblivious to his own hypocrisy, dollar signs may well have influenced Ryder’s own decisions to work in Azerbaijan, the UAE and, indeed, Malta where, as he says, ‘I’m not complaining about my salary.’

His take on the mass firings at AURAK is that ‘These are the people he [President of AURAK] didn’t want to build a university with…At least, that’s my understanding.’

But this doesn’t tally with the official reason provided by the then President himself, which was that ‘The university was “overflooded” with highly paid staff “all doing the same job”.’

Although Ryder describes his own mass firing of faculty members as ‘awful’ (there’s that word again) and the ‘worst day of my professional life by far’, his explanation is very similar to that given by the AURAK President and once more deflects responsibility for gross mismanagement, failures in strategic planning or the lack of any basic fall-back plans. Note, too, how Ryder swiftly moves from first person to the royal ‘we’:

‘Part of the problem was that we were way overstaffed because I had hired with certain assumptions about the number of students and we weren’t even in the neighbourhood for the first intake of students…It turned out to be much more difficult than we thought. We were way over-optimistic about recruiting and hiring.’

Such gross miscalculations (ongoing as these are) have, in Ryder’s eyes, nothing to do with Hani Salah’s total lack of experience in education:

‘That’s not so unusual for founders of universities…For him, this is a kind of legacy project. He’s done well in business and he wanted to leave a legacy and he wanted it to be in education and he has a particular regard for American higher education.’

Yet when it comes to Sadeen (aka Hani Salah) and AUM, he insists they’re 2 different things:

‘I’m not involved in Sadeen. I’m involved with AUM…They’re different organisations. They’re different entities. One owns the other in some clear legal sense but they’re not the same conversation…One owns the other but I’m not involved in Sadeen business other than the extent to which the university is Sadeen business but anything outside the university that has to do with Sadeen is no concern of mine. I don’t get involved in it. I don’t know anything about it. And they don’t bother me about it either.’

Ryder doesn’t get involved with the financial concerns of AUM/Sadeen either, despite drawing his salary from it. Stating that the funding for the AUM ‘is allocated by the Board of Trustees’, he has no problem with Hillman being the government representative on this board while embroiled in major money laundering allegations:

Wherever this ‘source of funds’ come from, it seems bottomless. It’s prepared to cough up for a rooftop swimming pool on premises recently lambasted by that bastion of propriety, Glenn Bedingfield. Commenting shortly before this latest ‘controversy’ broke, Ryder derided notions that this ‘was more evidence that this is clearly secretly a hotel. Whoever heard of a university having a swimming pool? Hundreds and hundreds of universities have swimming pools.’ Yes, but these are predominantly inside and not proposed when the ‘academic’ institution is already under scrutiny for being a scam. Perhaps the invisible students, so tangible by their absence at the AUM’s recent Open Day, can go for a skinny dip when they’re not chilling out in the numerous zones provided for the students who are so busily unseen.

This infinite source of funds is also able to offer massive reductions in tuition fees for its ever-diminishing student cohort. Compared to the original price list in 2017, the €1500 and €2000 prices offered today are truly bargain bucket at Tal-Lira. 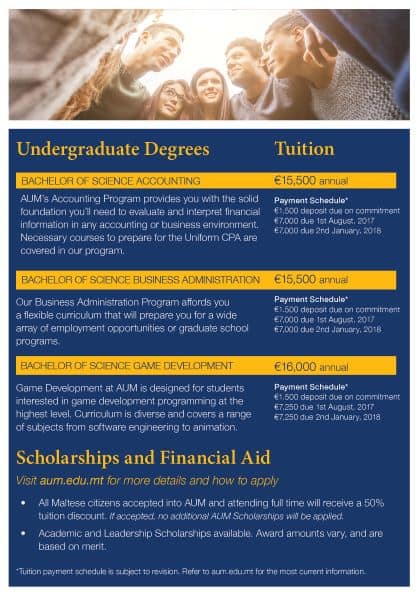 But everything’s ethically above board when you’ve got Hillman sitting at your table and Ethics is precisely what Ryder teaches – ‘I’ve taught courses in Applied Ethics actually’ – although he was predictably imprecise when it came to the number of students he actually taught, referring to 9 or 10.

When questioned about how it was possible to teach Ethics and not engage with what was going on, quite literally, outside his window, Ryder replied:

‘Well, one could, I actually do, I’m not sure I would justify this up to a point, I’m not sure how far I’d want to push it but I try to avoid local political issues in ethics courses…I try not to engage in issues about, especially that could involve partisan battles.’

One need only think of the Panama Papers, Henley and Partners, Pilatus Bank, Azerbaijan, Dubai, Huawei (the list goes on) to acknowledge that what happens in Malta can hardly be reduced to ‘local’.

As far as ‘partisan battles’ are concerned, Ryder told me himself that:

One positively quakes at the potential tribal rivalries erupting between Indian Nationalists and Chinese Laburisti, between pro-Delia New Delhi’s and Mintoffian Mandarins.

Underscoring its international reach, great offers to study in Malta can be found online. A closed Facebook group called Study in Malta advertises ‘Study in Malta without IELTS and pay fees after getting Visa confirmation.’ Another Facebook page, ‘Future INN Education And Immigration Consultant’, is specific to AUM with its ‘No IEULTS, No TOFEL, Low Bank Statement, Schengen Visa, No Win No Fees Facility Available’.