That was quite a cringe-fest on the Sunday Circle yesterday. It’s the magazine that came out with The Sunday Times and that showed 5 pictures of Ian Castaldi Paris beaming like he’s just lost his virginity. Five times. 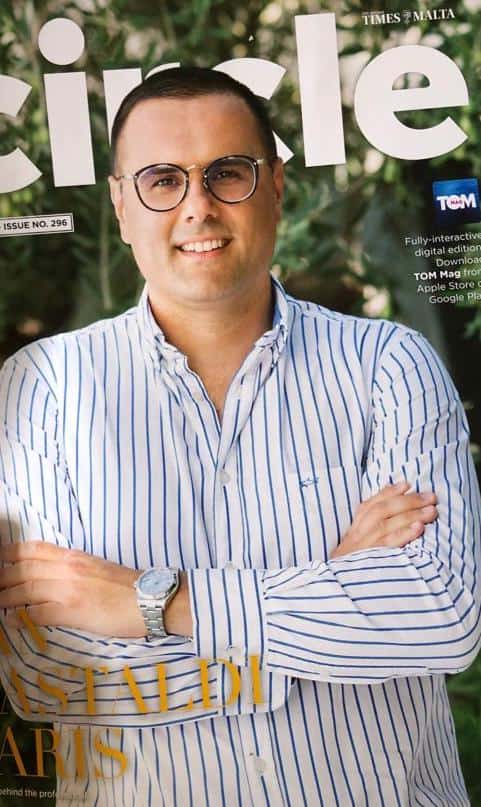 Ostensibly this cover story of the Sunday Circle is an interview with “the man behind the professional”. One amazing thing is that Castaldi Paris appears to have managed to change five shirts during the interview with an “entourage” — the author calls it — that has the good sense of remaining anonymous.

Without credit to the writer, who must have spent all of yesterday squirming in embarrassment, the “interview” gives credit to the photographer, Bernard Polidano and to MPS for something called “Video on Tom Mag App”. I could not be arsed to find out what that is though something tells me someone is going to link it in the comments boards here and it’s going to be an even greater squiggle.

Seeing Ian Castaldi Paris in five shirts is bad enough. I should hope the “Video on Tom Mag App” does not film him switch between them. 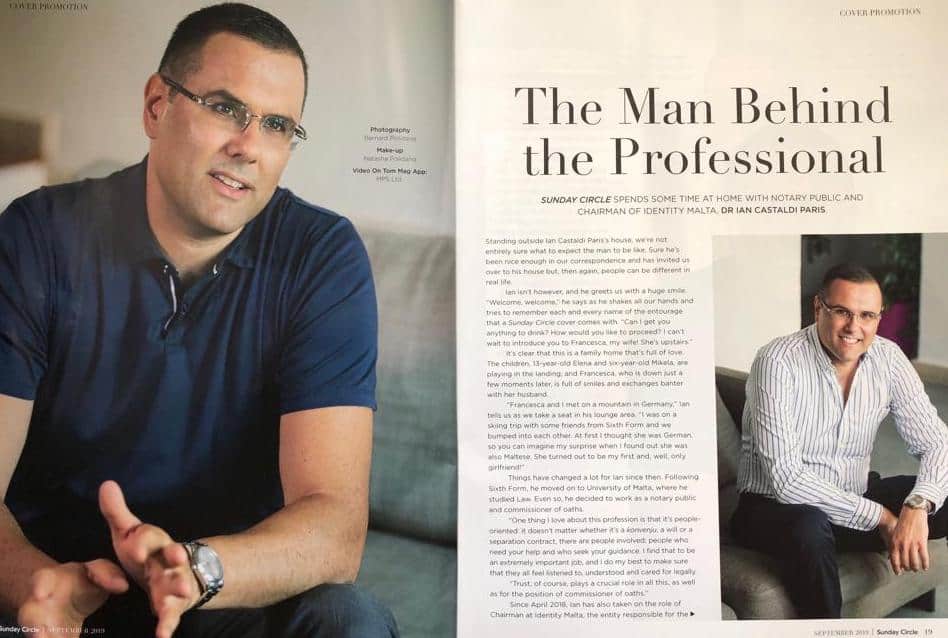 One more line of credit on this masterpiece of vacuity: Natasha Polidano splotched Ian Castaldi Paris’s makeup. Did he get a discount because he put her name there?

It’s significant that both the content of the “interview” and the photographs that go with it are in the style of the 1990s lad magazines that used to have WORDS as an excuse for the girlie pictures.

The “man behind the professional” turns out to be a superficial egomaniac who is very pretty and therefore doesn’t actually have to be very smart. He is the politically permissible incarnation of that sexist notion: the dumb bimbo. 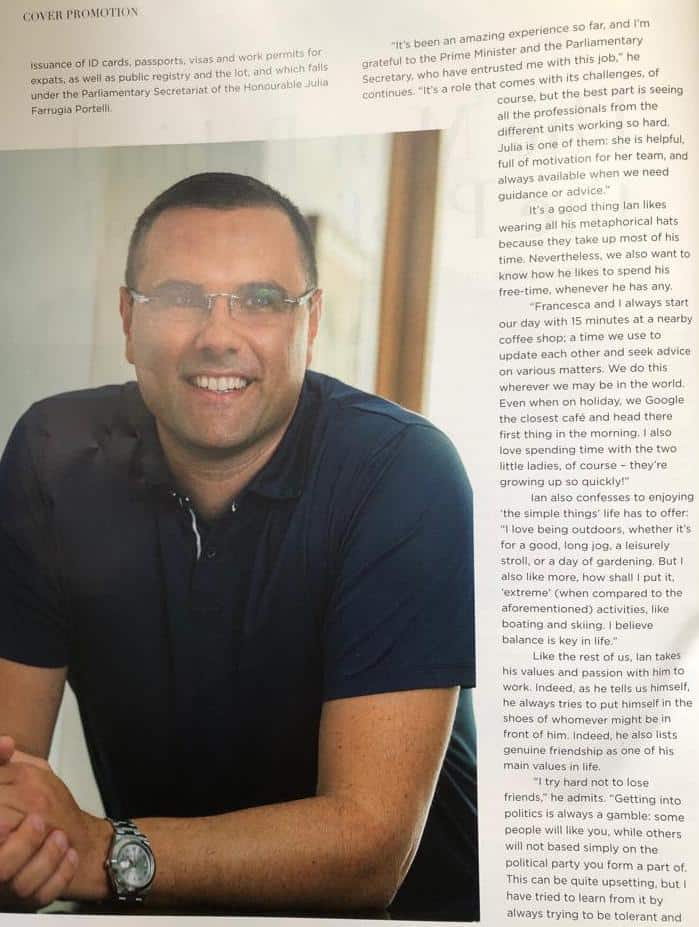 In his “interview”, he gushes over how much he loves his teenage sweetheart who is now his wife, and yet he shoves her out of the photos. Where is Mrs Castaldi Paris? Is she busy rubbing the candyfloss stains from the next shirt he’s going to put on?

In place of family pictures, we get the “man” in various poses of clothed autoeroticism. His hands, uncomfortably, are not visible in all the pictures.

Who is the professional in front of the man? That would the former PN Mayor of Lija who joined the backbiting army of 2008-2013 and was rewarded after that with jobs with the Labour government. This empty shell with a pretty face is now non-executive chairman of Identity Malta. Non-executive goes without saying. He couldn’t execute a cockroach if it came crawling up his leg.

Quite aptly, Daphne Caruana Galizia filed him in her “another hysterical Maltese male egomaniac” shelf on her cupboard under the stairs.

God knows what she’d have said if she saw this Playboy centrefold entry in yesterday’s Sunday Circle. How could the publishers justify this drivel? Ah, yes. They put their “excuse” in the very last line: “This is a paid feature”.

A hysterical Maltese male egomaniac thing to do if ever there was one is to actually pay a magazine to carry five hundred words of inanity accompanying five pictures of yourself looking inane. 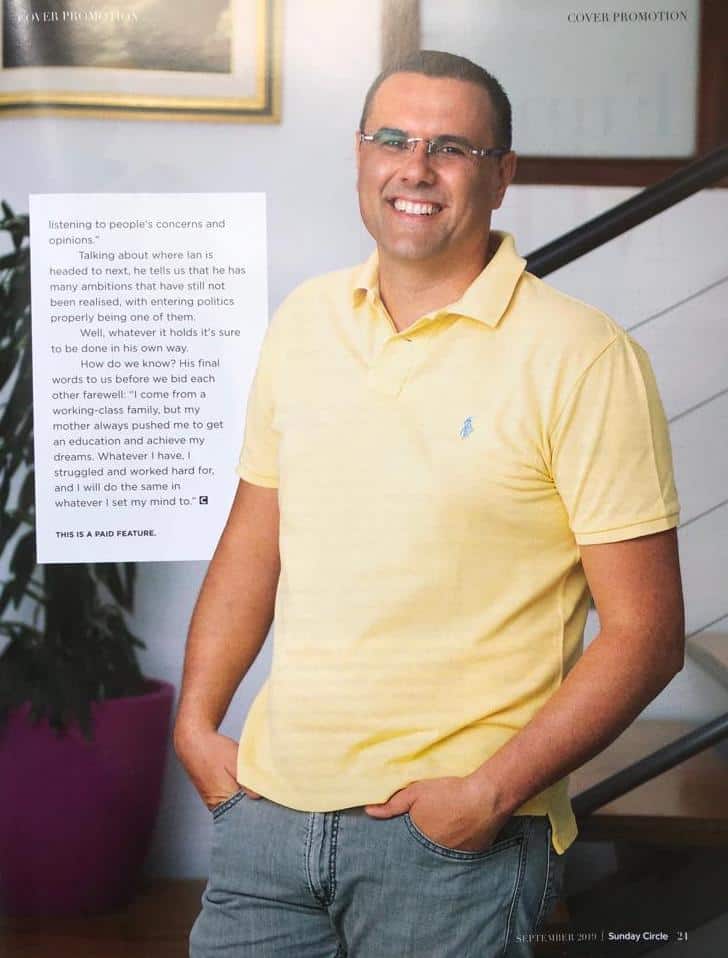 Think of all the trees that have been chopped for this to make the quick jump from printer to bin-lining. It’s enough to make you go march with Moviment Graffitti again.

And — shudder — I hope if someone’s money has been wasted on this monument to literary dullness, it’s Ian Castaldi Paris’s money. We wouldn’t imagine Identity Malta would be willing to spend money to tell us about the “man” — as he believes himself to be — behind its non-executive chairman.

Previous:Servant of God
Next:Ali Sadr wants his GPS anklet removed and to be allowed out till midnight