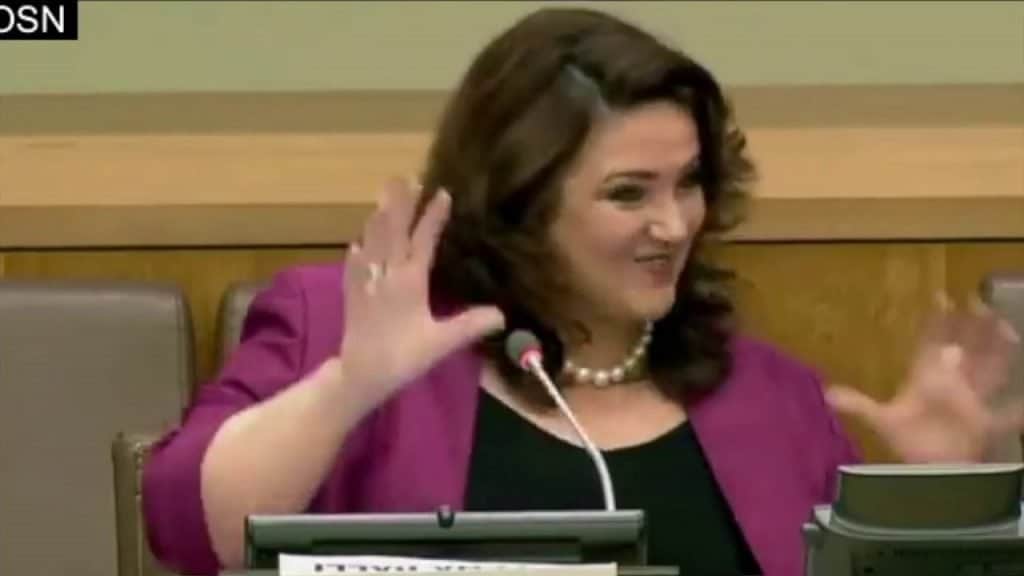 That the EU has nominated Helena Dalli as EU commissioner for equality is testament to the EU’s naiveté of zooming in on one tiny feature in the larger unfavourable picture.

Malta’s Labour Party’s governance is all about discrimination and double standards.

While the government welcomes wealthy foreigners of dubious reputation by peddling EU passports for a quick buck, it denies helpless immigrants’ access. When it does admit them, it allows them to be exploited shamelessly with unsafe, slave-like living and working conditions. Remember the disgusting picture of the hypocritical Muscat joyfully fondling a dog rescued from a boat laden with seasick immigrants who were denied shelter from treacherous sea conditions. Joseph Muscat tries to emulate Salvini in true Duce style.

Helena Dalli as Minister of Equality has never sought to distance herself publicly from her master’s strongman tactics when dealing with helpless refugees. I don’t recall her ever trying to intercede in their favour even when women or children were involved.

The Labour Party in opposition railed against the government for its discreet nepotism. All that has been forgotten as they now govern with brazen nepotism. Dalli knows a thing or two. Consider her ownfamily members. Her husband has not been a paragon of public virtue in more ways than one. When ordinary applicants go through hell for their building permits to be approved, the Dalli family proceeds with their illegal construction even though the permits have not been approved.

He sells a grossly overpriced, mediocre nude painting to the government. This is small-scale embezzlement of taxpayer’s money. On top of that, is the Dalli attitude to journalists. He intimidated the free press with a court case maintaining that journalists have no right to report on him just because he is Helena Dalli’s husband. This is not only his attitude to the independent media, but is emblematic also of his wife’s and the Labour government’s contemptuous way of dealing with the critical free press.

While the Labour government cracks down mercilessly on anyone taking a bribe for a handful of euro, provided they are not Labour Party supporters, it turns a blind eye to prominent government members receiving exorbitant bribes. Rather it persecutes and prosecutes the whistle-blowers. All this happens with the blessing of Helena Dalli. She boasts about the Labour government enacting the Whistle-blower Act. Some kind of act it is – in Labour’s hand, it is used as a tool of oppression. Remember how crooked contractors were encouraged and rewarded gratuitously for uncovering a supposed scandal within theopposition’sranks. This is in contradistinction to the ruthlessly orchestrated persecution and dehumanization of people who blew the whistle on government practices.

The Labour government is overdosed on large scale corruption in practically every deal it negotiates onbehalf of the Maltese people. Ironically, it railed against petty corruption allegations when in opposition even though it did not involve government ministers. When it did involve government ministers, the Labour Party encouraged them to cross the floor into the bosom of the Labour Party where they received protection from prosecution. Endemic institutionalized corruption on the scale practised by Helena Dalli’s government discriminately steals billions of funds from the ordinary, law abiding taxpayers. Helena Dalli as the minister for equal opportunities finds no problem with her government’s brand of corruption, embezzlement and extortion, though it vowed zero tolerance to corruption when in opposition.

In truth the Labour Party and its followers are above the law and are treated as first class citizens, when it comes to job recruitments, tenders, permits, investigation and prosecution of wrongdoing, press freedom, and so on. In Helena Dalli’s lexicon of equality, all are equal but some are more equal than others.

Helena Dalli’s colleagueshavebeen caught red handed engaging in large scale money laundering, tax evasion, protection of international criminality and stealing of funds from other EU countries through its policies which are discriminatory to other countries. Yet, through theirbrazen capture of the police force, media, civil service and the judiciary theyget away without prosecution, let alone investigation.

Those thatreveal these crimes areintimidated and discredited. On the other hand, the governmentis attempting to enforce prosecution of non-political entities engagedin financial services. This selective enforcement of the law is tyrannical. As the minister forequal opportunities, Helena Dalli oversees a milieu where laws exist in writing, but are only enforced if the miscreant is not a Labour Party adherent. If anything, these privileged crooks are sheltered from the law.

Helena Dalli knows a thing or two about the misrule of law under her government. She has represented the government shoulder to shoulder with the prime minister and his motley array of crooks when confronted by almost every EU delegation probing the undemocratic Labour’s governance. Joseph Muscat is proud of her, takes refuge in her presence and tries to showcase her in these uncomfortable situations. In every instance, she defended the indefensible, thereby making each and every item of bad governance inimical to EU values her own. Invariably the government’s replies were found to be wanting. Whereas several of the crooks cowardly absconded, she never missed the opportunity to attend and defiantly stare the EU delegation down.

As minister for European affairs and social dialogue, Helena Dalli has to assume responsibility for the disrespectful rhetoric directed against any delegationof MEPs that dared criticize her government. She also failed to rein in her sons (whomshe catapulted to the higher echelons of the Labour government) for their crude political activism directed against any critic of the Labour government, particularly against Daphne Caruana Galizia and her family, both in life and posthumously.

Minister Dalli knows nothing about true justice. The Labour government has perfected the technique of denying justice to anyone investigating it by delaying justice indefinitely. According to the Dalli family’s logic, it is discriminatory to even investigate a person who is the spouse of a minister and this practice must be legally banned.

It has indeed subsequently been ruled so by a “red” judge appointed by Joseph Muscat in defiance of the Venice Commission. Witness the ever-lengthening list of sham enquiries on government malpractice that are intentionally never concluded. They give the public the impression that something is being investigated when, in fact, nothing is. They are merely PR exercises intended to cover up the misdeed. The relentless delaying tactics the various government ministers employ to avoid any investigation of the government in the Daphne Caruana Galizia’s assassination attest to Helena Dalli’s government cynical motives.

Thegovernment has reluctantly accepted to conduct an inquiry into the murder of Daphne Caruana Galizia ordered by the Council of Europe. Or sothe minister of foreign affairshas said. They’releaving the formalannouncement to the very final week. This is nothing but a petty, spiteful delaying tactic.

Thereafter, the usual delaying tactics will be thrown in, no doubt, in the terms of reference, appointment of investigators and their remits, responsibilities, etc. The government’s overarching priority is for the trail to go cold, for justice never to be served, for the truth of the government’s role in the assassination never to be revealed. Dalli has been physically privy to many of these discussions with the EU delegations on the grotesque treatment of Daphne Caruana Galizia’s murder and the independent press when she defended her government’s stance. Contrast this anaemic approach with the vicious, swift, efficient enquiries and prosecution whenever members of the opposition are suspect of trivial malpractices. Remember the overkill meted out to Simon Busuttil’s chauffeur.

I cannot, for the life of me, see how she can even be considered for any of the three EU portfolios related to human rights,including this one. The three portfolios of justice, equality and rule of law can metaphysically be compared to the holytrinity. You either love or hate the threepersons in one. You cannot just respect the father and be dismissive of the other two. On a terrestrial level, you either unconditionally respect human rights (in its various permutations) or not. A lady is either pregnant or not.

The EU commends Dalli for her role in introducing certain legislation. The EU should be made aware that the means do not justify the end. The minister was caught on film boasting how she deceived the masses of the Maltese populace, in particular their church-going Labour supporters. She joked about how she treated them like idiots. Labour supporters punished her for this in the election for the deputyleadershipdespite the obvious preferential support from Joseph Muscat.

In true Labour style, she vindictively scapegoated her campaign manager for the defeat even though she alone was responsible for her humiliation. In that clip, Helena Dalli unwittingly admitted that the Labour government is based on one big lie. Hence, all their initiatives and policies are based on deceit and double talk. George Orwell said “during the times of universaldeceit, telling the truth becomes a revolutionary act.”

This explains the government’s intolerance of criticism, of the free press, of whistle-blowers and independent institutions like the church, the auditor general, the ombudsman’s office, Repubblika and the other NGOs,and so on.

Is the EU presidency, especially vice-president Vera Jourova, comfortable with having such an exponent of deceit within their fold? One who supposedly proposes equality based on deceit and double crossing rather than by logic and persuasion. An EU commissioner withany portfolio must respect human rights in their entirety.

As Minister for EU affairs, Helena Dalli has to assume responsibility for the repeated double crossing of the EU in many matters, none the least in the implementation of the EU passport sales. Her government is adept at saying one thing to the EU and doing the diametric opposite in practice. Joseph Muscat was considered to be too toxic for the EU. He is now pushing Helena Dalli as cannon fodder. Her association withhim and his policies is too close. He desperately wanted her as his deputy leader. She failed the election because of her ineptness at social dialogue while serving asminister for social dialogue. Although Muscat doted on Helena Dalli, she never used her trusted influence to publicly temper any of Muscat’s unsavoury government policies.

Imagine nominating Defarge or Salvini as EU commissioners dealing with immigration. Their skewed views on the subject and contemptforthe EUprecludes them. Helena Dalli has similarly skewed views on equality that do not concur with EU values.

It is disheartening to witness the alacrity with which the ineffective leader of the increasingly ineffective opposition announced his unconditional support for this nomination. I hope that the two Nationalist MEPs will do their duty according to their conscience and on behalf of their voters.