The Decline and Fall of the Muscat Empire 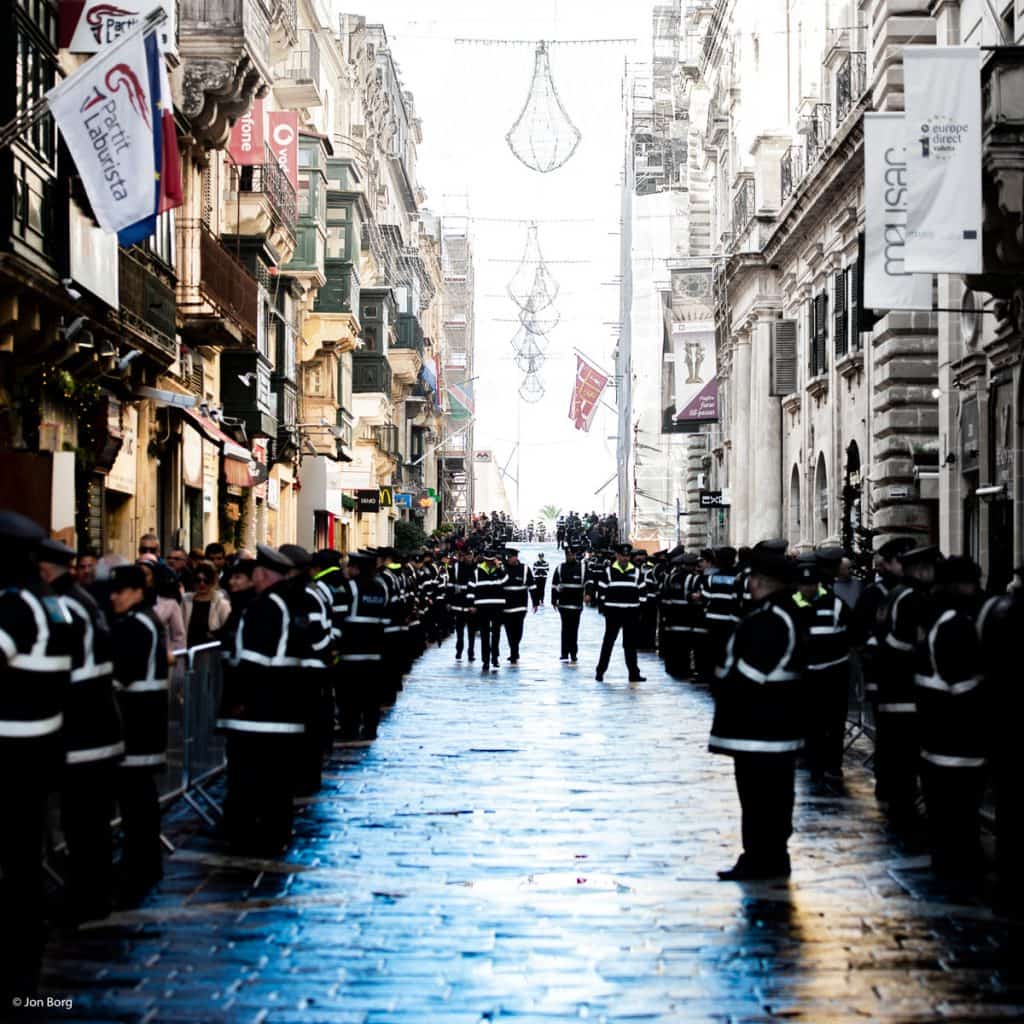 I never saw so many policemen in a single street, not even at a police parade. I’ve been to mass demonstrations in Berlin, Barcelona and London, to rock concerts in Paris and Jakarta and street parties in New York, to state occasions in Moscow, Cairo, Tunis, Harare and Madrid and seen Biblical crowds milling in the streets of Johannesburg, Hong Kong and Beijing. I have never seen so many policemen in a single street.

I remember the 1996 election when for reasons that hindsight showed to be entirely unjustified carried with them some fear of violence. As it happened the only violence perpetrated after the 1996 elections was on helpless cash registers. A story for another time. It was nothing policeman could do much about anyway. There weren’t as many policemen out on duty after the election of 1996 as there were in Valletta at sunrise this morning.

It was quite funny really and the policemen who would whisper and wink thought it was all a poor joke. The most commonly overheard phrase was ‘one wonders what they were expecting’. Indeed. It would have been too many policemen had Hannibal stridden over the Tritons ahead of an invading army of elephants. Less people would have been needed to turn Napoleon’s Grande Armee away towards Borodino. Xerxes’s Persian horde would have quaked in horror. There were enough policemen today to reverse the barbarian invasions, to divert Attila to lunch in Africa, to rebuff a stampede of angry wildebeest who would prefer to sup in the mouths of lions than confront Lawrence Cutajar’s platoons.

I’m not mocking the police officers. They were following orders. They were quite embarrassed doing so, poor lads. They would have handled this morning’s gathering with 10 people tops and they would not have needed the several hundred “plain clothes” officers “infiltrating” the crowd either.

About that. I am not famous for my sartorial advice but if ‘plain clothes’ is intended to mean unobtrusive, someone should give these poor officers some training in looking like anything but a rookie cop trying to look important. Also, shoving mobile phone cameras or sports-side zoom lenses in people’s faces is not obvious average protester behaviour.

Michael Farrugia posted on Facebook the protest happened without a permit. 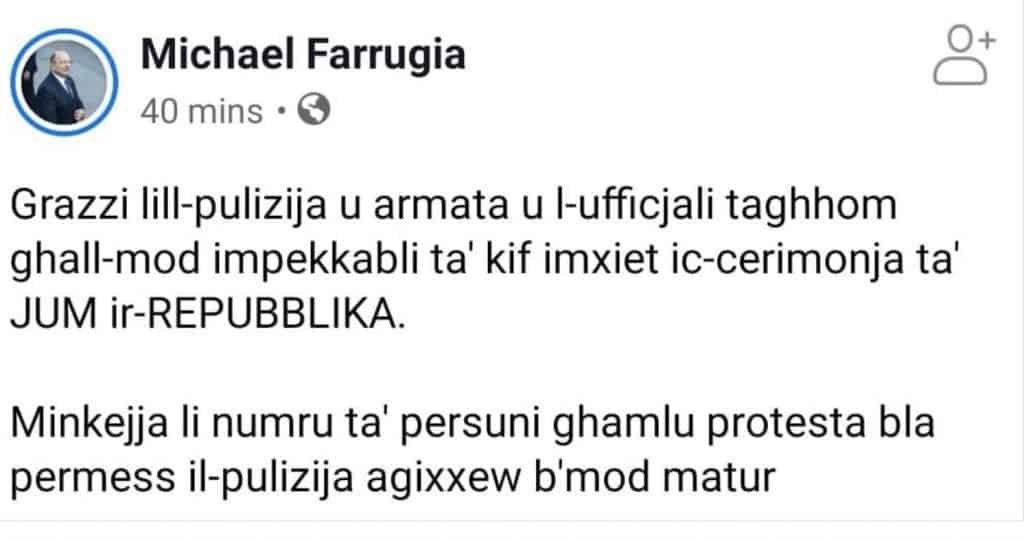 You complete, lying moron. There is nothing in our laws that requires anyone to ask for permission to blow on a whistle, bang on a stockpot and shout at the top of their lungs that you’re an idiot. Our constitution positively encourages that behaviour and prevents governments from restricting it.

This morning the ‘event’ was called by the government itself through its National Festivities Committee. They set up a parade of uniformed soldiers and invited the public to come along. We went along. I did not read anywhere in the invitation that anyone showing up needed to be supportive of a government led by murderers and thieves.

That’s like needing to ask permission to call out the referee’s wife’s sexual history during a football match with a generally dubious application of the off-side rule.

So, as Police Minister Michael Farrugia has lied to the public in his Facebook post by charging us for conducting a protest outside the law.

If the 3,000 or so policemen in Valletta this morning were not expecting even us to make some noise (because Michael Farrugia was suggesting we did it without notice) what were they there for?

I’m starting to suspect I know.

Earlier this week that poor supplicant Owen Bonnici said he was betrayed because Keith Schembri looks like he spilled official secrets to Yorgen Fenech. I gave Bonnici a lashing saying he should have felt far worse than betrayed. He should be feeling responsible as it is his responsibility to ensure the integrity of national and official secrets.

Insofar as there is collective responsibility and Owen Bonnici was in the room, I was not wrong. I also failed to mention the aggravating detail that by his own admission Owen Bonnici is Joseph Muscat’s attorney which makes him professionally conflicted in hearing the findings of investigations in a murder which his client is personally motivated to cover up.

Which is why Michael Farrugia should not be congratulating the police today. He should be apologising to them for putting them at greater risk allowing criminals (like Yorgen Fenech) the benefit of access to secret intelligence and investigative findings the policemen collect to their risk and effort.

Michael Farrugia supervised a breach of the integrity of national security and we know this from a witness Michael Farrugia’s own government pardoned in order to testify on what he knows.

While Michael Farrugia ordered every police officer on or off duty to watch us shout ‘korrotti’ very hoarsely in Republic Street, he took them off the job they could be doing getting to the bottom of what Keith Schembri and his gang are doing right now.

Is Keith Schembri passing and delivering messages from witnesses in the trials on Daphne’s murder? Is he getting briefings on progress on the investigation?

Is Keith Schembri being investigated for murder? Not while the police are too busy watching protesters shout a lot.