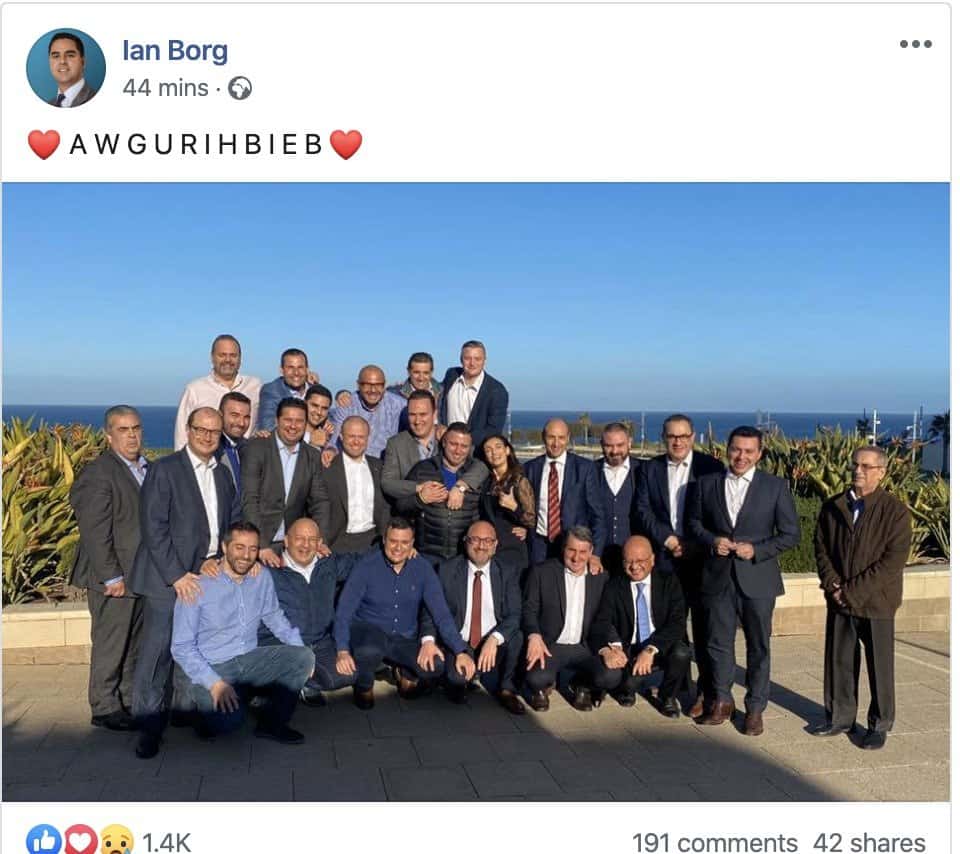 The socio-economic ramifications and the political theatre of the absurd discourse on these islands during these last years, programmed in minute detail years before same hit the stage, were nothing else but a treacherous act against the State. An act that had as its source the same party in government. Irrespective of the dark backgrounds to this sad chronicle, an objective evaluation of same would only conclude that this is an illicit political and constitutional government that needs to be accordingly challenged.

The Partit Laburista is no longer fit for government.

Numerous are the transgressive and criminal happenings lived on a daily basis:

These brush-strokes of a now deteriorating political canvas are not what our political society need to focus on. Subsequent magisterial inquires and eventual prosecutions would simply tantamount reverting to a state’s normality like an illusory rainbow subsequent to a storm.

What need to be analysed is what led to the evolution of this thinking that in and of itself is the ‘representation of things’ that cannot be divulged. This would lead one to confine oneself to the imagery of an aftermath to these historic dark corridors through the principles of civil peace – freedom, respect and dialogue. I would go as far as to include “benevolence” – the vehicle that operates towards the establishment of juridical and social justice.

To reconcile or to confront. This is the question.

Yesterday’s adversaries, that as such would need to be won over, have been transformed into enemies that need be conquered and possibly slain. The islands have lived this scenario as from day one of this governing body. The islands lived the day with uncomfortable decisions: whether to just interpret the positivity of a fledging autocratic regime or to engage sappers to dismantle this political force. But as history evidences, rarely have mass protests against a government been successful without the support of influential elite.

This is in essence the dismantlement of our liberal democracy where the notion of “man” related to the theory of knowledge as a sense of a transcendental subject is also an empirical object. In simple language man was no longer considered as a subject that could in all liberty think and decide but was transformed into an object. A perennial complex theory of truth or “un-truth”. Our political society is just lingering helplessly and discouraged in the middle of the street.

As Pier Paolo Pasolini would predict: there would be those who can read the future and identify the way forward for their own good and there are those others, faced with such uncomfortable decision making, even if they would have lived such battles before, who would linger in the middle of the street, helpless and discouraged.

It is evident that the winds appear to be turning the screw. What I refer to as the vast silent crowd is experiencing an indecisive awakening; constituted bodies, professional associations, academics, labour unions and the majority of the media, including others who over years had paid lip service to the governing body, too are experiencing a similar awakening.

This calls for a determined leadership the seeds of which are sown in our civil society – the essence of liberal democracies. This is the time for the whole of our political society, that hence includes our political opposition parties, to put aside differences and fight the fight. Differences would remain; but as long as these are not based on principles, these would be valuable. Errors and misjudgements on how to best coordinate the tribunes would be made. In De Bello Gallico Ceasar would indirectly recount that he not always had the best military tribunes, but always sought to maximise each tribune’s qualities.

In a political context that extends to a constitutional and institutional crisis, our politicians would wish to propagate the thinking that the country’s crisis does not call for partisan politics with every side having its secretive agenda as a damage limitation initiative of the respective party. Being partisan means taking a side. Civil society may rightfully claim not to take political sides. But this in no way gives the prerogative to any of the political parties to desist from professing their political beliefs in this reconciliation or confrontation.

Given this state of affairs can Malta’s society consider resorting to any form of reconciliation with a party in government that in line with its script consistently sought to have itself and the islands’ citizens live a lie? The lie is destined to proliferate. Following the end of the cold war a number of European states tentatively dipped into the enchantment of liberal democracy only facilitating the revival of past living skeletons.

With identified “persons of interest” in criminal investigations still acting as kings of the roads and with prospective LP leaders vouching to keep recruiting the services of possibly presumed “persons of interest” it is doubtful that a promised revamping of our institutions could materialise. Christianity and liberal democracy in no way exclude the existence of evil men. Behaviour breeds contempt.

Civil society and the opposition parties, while placing the common good of our society on top of the agenda, are no way bound in assisting in the doubtful rehabilitation of the Partit Laburista in government. The enemy is within and does not demand fraternal measures.

Would the Partit Laburista be prepared to adhere to such a reconciliation process? And more importantly could it be trusted? Given the latest developments it would apparently not.

Society cannot do without political parties. The Partit Laburista has an impressive history and its submitting itself to the above reconciliatory conditions could only help in its rehabilitation.

But the key to such process is trust. One particular PL leadership candidate discussing dialogue with political society on television in clear language has dismissed the relevance of the Partit Nazzjonalista in such process. Regrettably a statement that failed to hit the headlines.

In short, the Partit Laburista on all accounts is no longer fit to govern.

This call for our civil society and opposition parties to embark on a determined political humane confrontation is the answer. Provided that such a political direction recognises the principle that in a liberal democracy, based on Christianity and the law of nature, the authority is at all times vested in the people.

Previous:The mighty have not fallen quite yet but we can only hope they’re not feeling safe
Next:Granting Egrant (0)