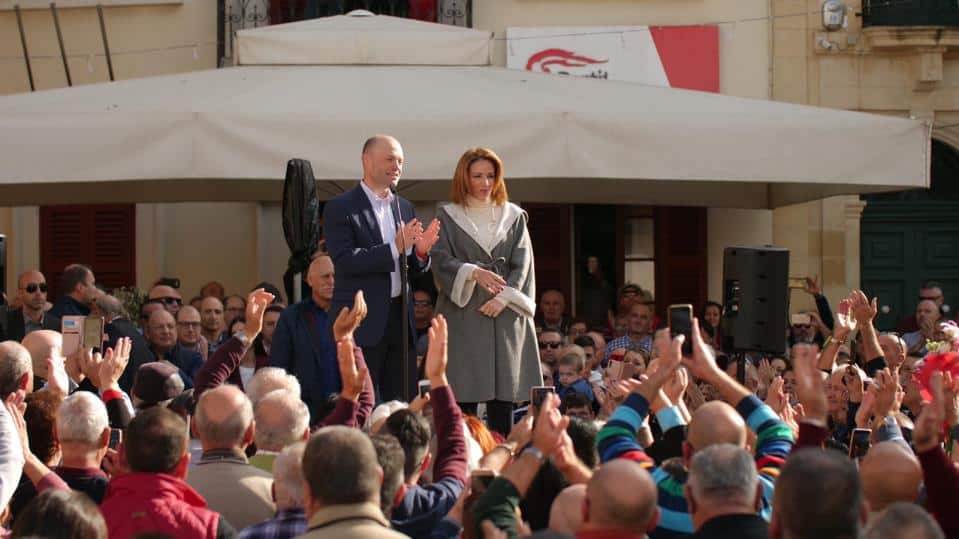 It’s at times like this that I miss my “I M Beck” persona. The Times’ decision, after some twenty years and more, to discontinue me, for all that I don’t miss looming weekly deadlines, leaves me bereft of the opportunity to have fun with the Great & Good (scratch that) Bad.

Not that fun is all that easy to have in these dark days.

The Sublime Leader’s Farewell Tour amongst the faithful of the Cult of Joseph would have been grist for my mill. I would have written something on these lines. I’m basing myself on the Times’ report of the first leg of the Tour, the one that took in Naxxar, Żebbuġ and Paola, incidentally.

Soon-to-be-but-way-not-soon-enough ex-PM Muscat started out by telling the assembled steel men and few that this was not the exit he had imagined “but circumstances had forced a change of plan”.

It was Bart Simpson, I believe, who had contributed that gem of gems to the English language when he ejaculated the priceless “Duuuh”.

Seriously, Dr Muscat, you never imagined that you would have to scuttle back down the stairs to Castille in disgrace? Wow, I would have put folding money on you having planned to do just that, 7-odd years ago when you were grinning from ear to ‘ere, having won the 2013 elections. Not.

Spare us your ‘poor me, I’m having to bear the brunt of the iniquity of others” why don’t you, and listen not to us, but to your good and dear buddies, Cyrus Engerer, Marlene Mizzi, Saviour Balzan, MLC Preca and so many others and don’t let the door hit you on the way out.

Moving swiftly on, the ex-PM in all but fact told us that – a bit like Edith Piaf – he has no regrets because “while other big cases are still swept under the carpet, we showed that we do not look at faces.”

I’m being restrained here when all I can do is spit the words represented by “WTF” in his direction. This is the specimen who, for the sake of all that’s holy, resisted tooth and nail the institution of a proper Public Inquiry in the assassination of Daphne Caruana Galizia, only putting it into place when international pressure became irresistible.

And what are the “other big cases” that are being swept under the carpet, pray tell, Joey?

Surely you don’t mean the Magisterial Report on the Egrant matter, which reduced you to tears? Is that one of them? Or the Inquiry into the hospitals scandal, which promises to embroil one ex-Minister and two current ones, which has been resisted tooth and nail?

No, of course not, you mean the Raymond Caruana and Karin Grech murders, don’t you, the ones your revolting little trolls have been using to strengthen your political case?

These heinous crimes, just in case you’ve forgotten, were committed, as were so many others, under a Labour Government and you, mate, have been in power for many years now, and you’ve done nothing, absolutely nothing about them.  Except demonstrate your awesome capacity for hypocrisy by having your trolls cite them at the drop of a pair of handcuffs.

Or were you talking about that oil scandal, the one you shoved down the Nationalists’ throats before the 2013 elections? Last I looked, the people involved were all walking around scot-free.

Muscat’s glossy lips let slip quite a few more beauties, defying logic to the extent that you have to wonder exactly what he’s smoking and making you want a good toke yourself.

Look at this one: he did this (resigning) serenely “knowing that the movement we built together did not start with me and will not finish with me, so that my successors start with a clean slate.”

Analyse this: he built the movement, but it started before him, and even if it won’t finish with him, his successors start with a clean slate. Logical gibberish if I ever heard any.

He then went on to promise that he will remain within the fold, doing whatever it would take to keep Labour winning but giving the new leader space to work – more logical gibberish, with a subliminal message that would make me soil my drawers if – heaven forfend – I were to be taking over the leadership. An albatross around my neck would have nothing on the ghoulish face peering over my shoulder that Muscat is promising.

There’s plenty more, virtually every line is self-contradictory, but the cherry on the cake was well and truly popped when he “confessed” that he had to go because he had to shoulder responsibility so that those who came after him (after me, the monsoon?) would have a solid foundation on which to build.

No, Joseph Muscat, you have to go, and go now, today, not tomorrow or the day after, because under your watch this has become a country that is nothing better than Europe’s sewer, looked at as a Mafia-fiefdom by the Mafia itself.

You have to go because of Konrad Mizzi, Keith Schembri, Edward Scicluna, Chris Cardona, Michael Farrugia and Owen Bonnici.

You have to go because of Hearnville, Macbridge, 17 Black, Egrant and Tillgate, and Vitals and Pilatus and that bloody tanker in Marsaxlokk bay.

You have to go, more than for any other reason, because Daphne Caruana Galizia was murdered.

And please spare us your revolting mantra about how you’re being blamed for all of the above and more, poor lamb that you are, not because there are people who are “angry and concerned” but because there are “others who were united in their thirst for power and not in seeing justice being done”.

Bullshit, you horrible man, bullshit and more: all we want is for justice to be done. Your successor, whoever he is, can keep the power you were so obviously slavering after in 2013. Just as long as he does justice to all, including, if necessary, ensuring that you take a good long rest “at the Republic’s expense”, if that’s what it takes.