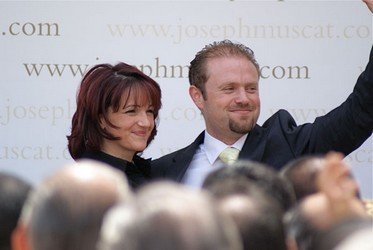 The situation is really troubling. The government’s pretence that everything is OK is becoming increasingly disturbing even to people that have supported Joseph Muscat through thick and thin. This morning I mentioned former Labour MEP Marlene Mizzi and former President Marie Louise Coleiro Preca. They are significant because they are veterans of the Labour Party, people with little reason to like Daphne Caruana Galizia, and people who have behaved in a questionable manner in the interval between her death and the present.

And yet they refuse to ignore the facts and are demanding Joseph Muscat leaves office right this minute.

It is not an everyday occurrence that exponents of the Labour Party ignore dogmatic instructions from thought control central. For three and half years they have been instructed by head office not to believe there was anything to the Panama allegations. It takes spectacular loyalty to look away from published documents. But look away they did.

Now they’re not looking away anymore. And they are particularly annoyed that they find that thought control central has not been giving them a hymn sheet with which to respond to the opposition’s slander. Instead for three and a half years it gave them instructions to cooperate with their silence and their responses in the perpetration and cover up of a murder. They never meant to do that. And yet, here they are.

Exponents of the Labour Party with a conscience (which is many of them) are tracing back the lines they parroted. Daphne is a traitor. Daphne is lying. Daphne hates Labourites. And then they repeated after her death the insidious insinuations shaped in the form of questions the answers to which remain unspoken but for all that no less loud. Why did Daphne’s son leave the car outside? Where’s the laptop? Do Daphne’s sons want justice for their mother or do they just hate Labour?

They repeated these lines with ease because they have grown to trust their own party and they have grown to mistrust anything coming from outside it. They were even prepared to assume Daphne’s children are matricides. Since they are bad enough not to be Laburisti, then clearly they must be bad enough to be mother-killers.

I don’t mean to suggest that your average Marie Louise Coleiro Preca thinks this sort of thing through. I do suggest that someone like her can allow themselves even as they serve in the office of president not to think at all and to assume that all non-Labourites are interested in is removing Labour from government.

And yet Yorgen Fenech’s arrest was the moment when for the first time ever Keith Schembri’s and Konrad Mizzi’s positions in government became untenable. In people’s minds, even in their cabinet colleagues’ thinking, the arrest of Yorgen Fenech amounted to sufficient proof that Keith Schembri and Konrad Mizzi had enough political responsibility to force their removal from government.

Since then it got worse. Melvin Theuma, pardoned by the sole action of the prime minister and therefore giving testimony that is probably circumscribed to the point of giving Joseph Muscat the least possible grief, goes on to say that he first got to meet anyone from Joseph Muscat’s office just after he accepted Yorgen Fenech’s commission to kill Daphne.

We heard how Sandro Craus called him at home. How Keith Schembri received him at the steps of the prime minister’s office where visiting dignitaries are received, took him in for a coffee, a chat and a selfie. How Keith Schembri proceeded to put pressure on a government official to give Melvin Theuma paid employment in exchange of, officially, nothing at all. How Kenneth Camilleri communicated with the assassins awaiting trial in jail promising them early release and a huge reward for their silence.

Unlike Yorgen Fenech, Melvin Theuma is not out to pin this murder on Keith Schembri. And yet the information he gives implicates the prime minister and his staff right up to their eyebrows in a murder conspiracy.

And then there’s the bit about how Melvin Theuma received from Yorgen Fenech tipoffs about police and security services work which Yorgen Fenech said he got from Keith Schembri. You may recall (we put it in our book as well) the interrogation of the Degiorgios by Keith Arnaud soon after their arrest in December 2017. In that interrogation Inspector Arnaud expresses clear annoyance at the fact that the Degiorgios looked like they were expecting their arrest.

Alfred Degiorgio scribbled his girlfriend’s number in ink on the palm of his hand that morning and had thrown away his phones. Even the dog that kept them company every day at their Marsa “potato shed” was not there that morning.

What we have here then is the charge that Keith Schembri’s wilful breach of his official secrecy obligations and Joseph Muscat’s crass negligence at least put soldiers and policemen who went to arrest the Degiorgios in clear and present danger. What if the tipped off Degiorgios decided to fire back? As it happened they didn’t but they certainly covered up evidence that could have linked them earlier to the other members of this conspiracy. That’s Keith Schembri tampering with evidence and that’s Joseph Muscat putting him and keeping him in a position to do so.

There’s one more thing all those former supporters of Joseph Muscat who now say he must leave immediately are thinking about. To them the penny dropped when Yorgen Fenech was arrested. When that happened they did not need any explaining on the motive for the assassination. Their assumption that the 17-Black and Panama allegations was a figment of a witch’s imagination switched to the assumption that Daphne Caruana Galizia was right after all.

The moment they realised that, their gaze turned from Yorgen Fenech – murderous bastard he may be – and on to the people he bribed: Keith Schembri and Konrad Mizzi. That’s why their resignation, resisted for so long, became inevitable at that point: because now they looked like they may have been behind the murder. Thinking of the possibility became far from unreasonable.

That’s still without the information Melvin Theuma and Yorgen Fenech would provide after the fact.

Now what Joseph Muscat’s former supporters are also thinking is the fact that unlike them Joseph Muscat was told Yorgen Fenech was a principal suspect over a year ago. This is the question everyone is asking? Why did Joseph Muscat too not have the obvious thought that if Yorgen Fenech killed Daphne he did so to cover the crimes he was part of in partnership with Keith Schembri and Konrad Mizzi?

Three and a half years ago we used to ask why did Joseph Muscat not fire Keith Schembri and Konrad Mizzi when the Panama companies were discovered? And the general suspicion was that was because Joseph Muscat was in on that scam too. The existence of a third company whose real owner remains officially unknown did not help.

Here’s where it gets messy. It should be obvious to everyone that Joseph Muscat must resign immediately so that justice can take its course. And yet those who are lined up to succeed them are helping keeping him there, touring towns and villages with him, drumming up support for him, laundering his reputation for him apparently ensuring that the arm of justice never reaches Joseph Muscat.

The continuous barrage from within Labour thought control HQ is that the party must show ‘unity’. That means that what Marlene Mizzi and Marie Louise Coleiro Preca said in the last 24 hours – and they’re from alone – amounts to a crime against the Labour Party.

The fact is that ‘unity’ behind Joseph Muscat is the Labour Party’s best way of ensuring that people who trusted it before, even up to last month, will now wonder if they can trust any of its governments with or without Joseph Muscat, Konrad Mizzi and Keith Schembri within its ranks, not to commission murder to silence anyone else who might be getting in the way of its grand schemes.

Few people, thankfully, are loyal enough to any party, to want to live in fear of being killed by their government.