Following Lovin Malta’s report that Joseph Muscat accepted a Bulgari watch worth an undefined number of tens of thousands of euro from Yorgen Fenech, Repubblika today filed a report asking the police to investigate this as a bribe.

The wristwatch was handed over when Yorgen Fenech’s Electrogas Consortium needed most desperately the government’s good will. It needed more than mere good will. When the senior partner of Electrogas, Gasol, went bust, Yorgen Fenech and his partners should have properly lost the deal. They lost the partner with the money and the experience in gas projects. The consortium that had been selected by Brian Tonna had collapsed and by rights someone else should have been picked for the contract.

But the government shifted the goal posts and gave Electrogas a deal anyone else could have won because the new contract dispensed with the need of a capital commitment. Instead the government leaned on the BOV to lend Electrogas the money they needed to build the power station and guarantee most of that loan.

You keep coming across trolls with tu quoque retorts all the time but that now are not merely fallacious and illogical but also plain lies. No, “taħt in-Nazzjonalisti”, ministers are not remembered for accepting gifts worth tens of thousands of euro from contractors. The closest analogy is so far from this that it is ridiculous in comparison. Tonio Fenech accepted an arloġġ tal-lira worth some 400 euro and was politically crucified for it.

And no “taħt in-Nazzjonalisti”, the government did not intervene to provide bidders a bank guarantee covering the investment they were expected to make. There is nothing in Maltese procurement history that compares with this.

And that’s because “taħt in-Nazzjonalisti” the Electrogas scandal would not have happened. And it’s not just about “Nazzjonalisti”. I’m fairly sure Alfred Sant would never have countenanced this madness.

Joseph Muscat spent 48 hours dodging the bullet of having to respond to this latest Bulgari watch scandal. After Repubblika’s police report he tried to fudge something in a statement that categorically does not deny the fact that he got this gift from Yorgen Fenech.

Quite the opposite, it obliquely confirms he did. Joseph Muscat expects credit for allowing Yorgen Fenech to be charged with killing Daphne Caruana Galizia as if that should have anything to do with what he allows or does not allow to happen.

He adds that he has allowed Yorgen Fenech to be charged in spite of being blackmailed. I am paraphrasing here and for fairness’ sake I am reproducing below the statement itself. Joseph Muscat is playing in a very dangerous field right now and he’s obviously choosing his words carefully. What I’m giving you here is my reading of what he’s trying not to say but that in my view comes through his writing anyway.

Joseph Muscat is saying that he knew that Yorgen Fenech’s arrest would eventually lead to revelations that would embarrass him profoundly. These scandals are presumably being drip-fed by Yorgen Fenech’s attorneys who are briefing the press with an escalating list of shockers in the hope that they can force the hand of the government to grant Yorgen Fenech some plea deal.

We had the bit about Yorgen Fenech being with Keith Schembri and Joseph Muscat on the Florence jaunt paid for by Ali Sadr Hasheminejad, formerly the owner of Pilatus Bank and banker for the corrupt within Malta and outside it.

Now we have this watch. This watch is a damning scandal. At any other time on its own and in isolation from the implied connection to rotten power station deals, not to mention murder, the acceptance of a gift of this magnitude ought to have forced Joseph Muscat to resign.

Now in his statement Joseph Muscat expects us to applaud him for allowing Yorgen Fenech to be charged with murder knowing that he would reveal this thing about the wrist-watch about him. I cannot shake the feeling that Yorgen Fenech has not revealed all his cards yet.

We could see Joseph Muscat had a fairly good idea how unhappy his future was going to be as we saw him shrink in front of our very eyes through 2019. Just because he was expecting this story to come out it does not mean he is a hero. Of course, he expected this stuff to come out. He knew about the watch. We didn’t. Only he knows what muck still needs to be raked.

Joseph Muscat knew full well how serious this scandal was. Because in this story, and in his admission that he was being blackmailed about It, is the reason we write rules that prevent our judges, our civil servants and our politicians from accepting stupidly expensive gifts from anyone, particularly from someone on whom they are due to use their powers of office to take decisions.

It is precisely because he would place himself in a situation where Yorgen Fenech could blackmail him that Joseph Muscat should have sent the watch back to him with an angry note.

If he had done so, if he had declined approaches by Yorgen Fenech for private reward in unspoken or spoken exchange for public decisions, Joseph Muscat would not be in the trap he is.

We spent three and half years wondering why Joseph Muscat did not fire Konrad Mizzi and Keith Schembri. But as we wondered we always knew it was because Joseph Muscat was corrupt, he accepted bribes and took public decisions for personal profit.

This is unprecedented. And it is unchanged by the horrible sight of Joseph Muscat laundering his reputation by touring the Vatican, Betlehem and today the sancta sanctorum of religious pilgrimages, l-Istrina. 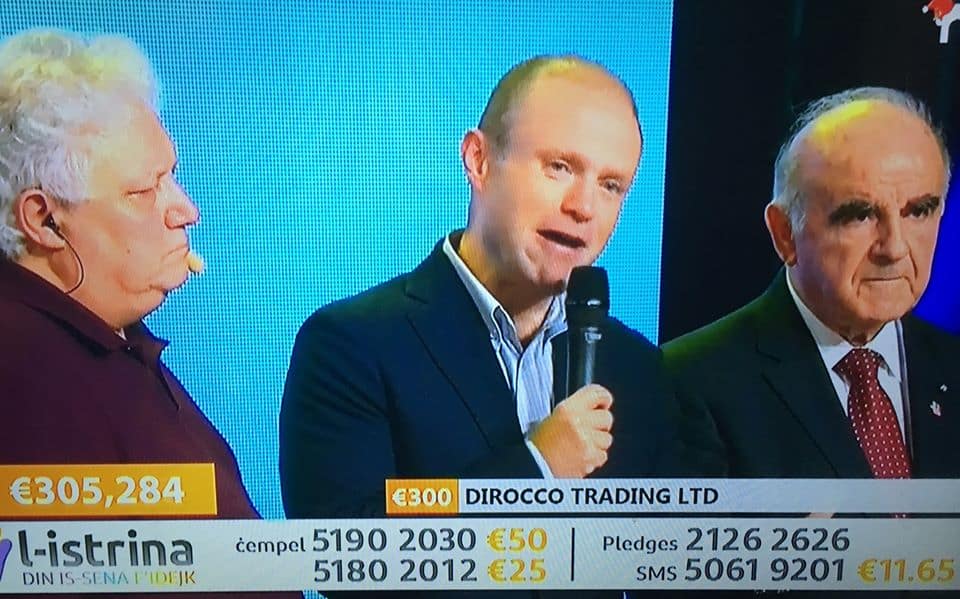 Which reminds me. The president is right to argue, as I see it, that he cannot quite fire Joseph Muscat. But when he stands next to him as he did today at l-Istrina and behaves as if he was not standing next to a corrupt disgrace to our institutions and to our nation, quite likely implicated in murder, President George Vella goes beyond his call of duty in helping Joseph Muscat look like a prime minister. He’s not a prime minister. He’s a crook and a lying bastard.

And after Repubblika’s report today he needs to explain to the police why the man charged by the police for killing Daphne Caruana Galizia gave him a very expensive watch. 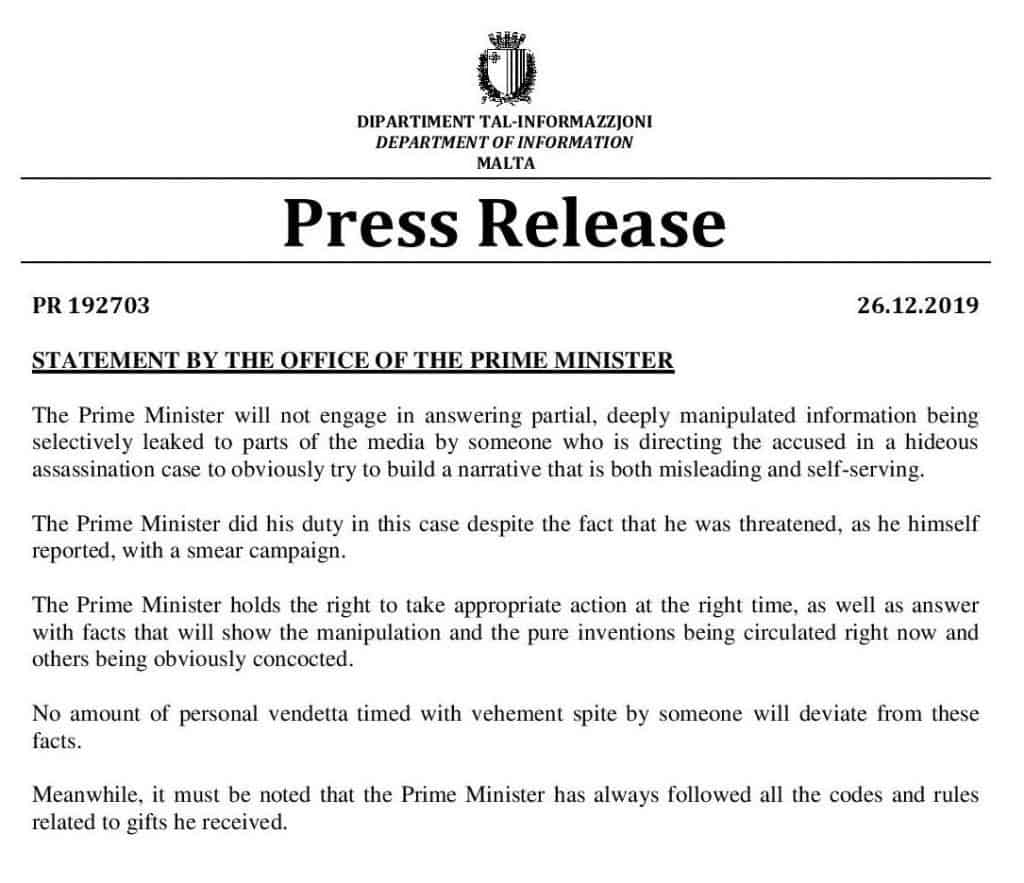 Previous:Joseph Muscat wishes you a Happy Christmas
Next:Keith Schembri travelling out of Malta with his family — reports