GUEST POST: The inauguration of a partly completed 800 metre road and the Vice-President of the European Parliament

Robert Abela got to know that Bernard Grech was going to be in Gozo last Thursday. He has spies everywhere. He was not to be outfoxed. He gathered his communications staff (about 81) and ordered them to prepare a public relations event for the same day. Telephones buzzed to all ministries to see if there was any chance of organising something Norma Saliba could dispatch a reporter and a camera to fuss over.

The ‘eureka’ came from Infrastructure Malta. The one-year effort of fixing Triq Sant’Antnin that connetx Għajnsielem to Qala was but a few months from completion. They contacted the Gozo Ministry who confirmed that a press conference, with podium and frills can be organised in time. “Let’s do it,” said Robert.

The big day came. The prime minister, ministers and distinguished guests all travelled to Għajnsielem to admire this new feat of engineering. Speeches followed, hailing the government’s infrastructural works in Gozo, which included laying tiles at Pjazza San Franġisk in Victoria, a marvel that took over two years to deliver. Triq Sant’Antnin was described as an artery which connects Gozitans, Maltese visitors and tourists to Qala and Nadur. It is but 800 metres long and took 6 months to be completed with a cost of €2 million which roughly amounts to €2,500 per metre.

The road was officially inaugurated by the prime minister and minister for Gozo, Clint Camilleri. But being a resident of Qala I can confirm that the prime minister inaugurated a road that is not yet ready. It still has to be properly tarmaced, it still needs signage and road markings. The work on the retaining walls is still to be completed. But that will come later, if ever. The main aim was to get a spot on TVM to drown out the real news. It did. It was the fourth news item on TVM on Thursday night, after a story about alchohol usage by adolocents, humdrum and mindlessly optimistic covid-19 news and the retiring age of judges and magistrates.

Roberta Metsola’s achievement of becoming the First Vice President of the European Parliament was relegated to the seventh spot on the news on the logic that we have as many First EP Veeps as we have 800 metre roads needing repair. And the matter was reported like a sullen obituary. There was no footage, no interview and no mention of the people who congratulated her. TVM put less work in reporting this than a handbag robbery. That is the national broadcaster for you. You should have learnt by now.

Because for Norma Saliba, like Reno Bugeja before her, news are what Castille say they are. Before it was Kurt Farrugia and today it could be Matthew Carbone who is pulling the strings. And Norma, the faithful puppet, accepts this in the name of loyalty to the party.

Robert Abela, as prime minister of (all) Malta has yet to congratulate Roberta Metsola for her unique achievement. After all, as many sheep would say, Roberta is just a traitor and all she does in Brusells and Strasbourg is act against her own country. Not like our hero prime minister who defends Malta with all his might. Unlike him, President George Vella congratulated Ms Metsola and gave an audience to the new First Vice President of the European Parliament.

Now let us take some time to applaud Roberta Metsola. The lawyer was first elected to the European Parliament in 2013. She was re-elected again in 2014 and 2019. Between 2004 and 2012, Metsola worked at the Permanent Representation of Malta to the Europoean Union. She later joined Catherine Ashton, the High Representative of the EU for Foreign Affairs and Security Policy, as a legal advisor.

Roberta Metsola stole the show, when on 3 December 2019, she refused to shake hands with outgoing corrupt prime minister Joseph Muscat when a European Parliament rule of law delegation visited him in Castille. The photo of Roberta Metsola’s rebutting Joseph’s handshake went viral on social media. 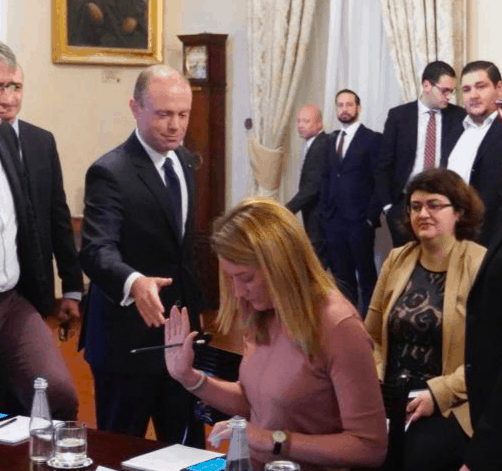 Previous:#occupyjustice with messages to government one year after mass protests started
Next:Freedom of the City