How long is your spoon, Simon Mercieca? 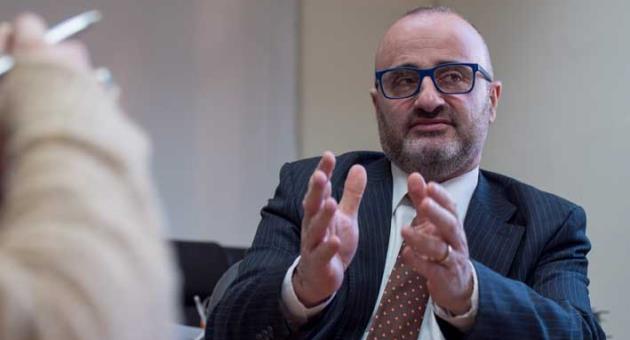 I’ve written about Simon Mercieca on this blog a few times and I worry that I end up promoting the hallucinations of a lunatic simply by flattering them with a response.

I could go on about the lies he is perpetrating. He would not call them lies. He would call them alternative facts, relegating reality to an optional theory ranked alongside his fancy like evolution and creationism.

Right now, he’s going on about how the fuel smugglers have not been charged by the police before now because I (Manuel Delia, if you please) didn’t want them to. He is saying that the existence of an article I wrote almost three years ago challenging the government’s spin that Daphne Caruana Galizia was killed because of fuel smuggling somehow demonstrates that I bent the will of civil society, of the press, of the police and of the judiciary to keep the fuel smugglers free. And why am I supposed to have hatched this evil plan? Not because I hold stock in smuggled fuel but because I was part of some sort of conspiracy to frame Yorgen Fenech.

I could go on about the fact that Simon Mercieca’s writings are casting a terrible light on his primary profession as an academic and a historian to boot. At a time when people are ‘tired of experts’, when scientific truth is optional, when conspiracy theories are given credibility alongside demonstrable fact, an academic, whose function in society is primarily to bear witness to documented fact and to dispel the myths of convenience created in the past, is himself the one to fabricate new myths, wilfully, deceptively and callously.

I could go on about how he has taken it upon himself to exonerate Yorgen Fenech, to replace the Labour Party in leading the onslaught on the surviving family of Daphne Caruana Galizia, to undermine civil society with inuendo and outright slander.

I could go on about all that but I’ll do that another time.

Right now, I want to say something else. I want to explain to Simon Mercieca something he may or may not understand. The limit of the damage as a consequence of drawing a wrongful interpretation of the intentions of some mediaeval grandee or some historical figure, reaching misguided conclusions in a historical treatise that someone else later refutes, or even falsifying and lying about historical evidence to make it fit in one’s idea of what the past should look like, is the loss of the reputation of the historian who makes those mistakes.

If anyone were to suggest Horatio Nelson was a Bonapartist on the back of a fraudulent and fabricated letter they claim was secretly found in a descendant’s attic, they would be the ones to look like an idiot and suffer the derision of their profession. These things have happened. They happen in the trade of historians as they happen to chemists. But lying or misleading readers about history only harms the historian who perpetrates the lie.

But Simon Mercieca is now misleading the present. He may, by virtue of his academic background, be used to think there is a remoteness between the conclusions he draws and the games he plays and the impact they might have on the real world. No one is going to hurt if they get the wrong impression about Horatio Nelson. But now he’s playing in the world of the here and now.

He is doing more than speaking on behalf of Yorgen Fenech or proclaiming his innocence, or worse, denouncing his status as a victim of a frame-up. He is working to get Yorgen Fenech to avoid justice. To help Yorgen Fenech do this, Simon Mercieca is pinning the murder on others, sometimes vaguely, sometimes less so.

He is attributing malice, criminal intent and action to people who are prominent in the cause of truth and justice in the case of Daphne Caruana Galizia. Let me explain that.

He is accusing journalists, including myself, of working to get the people who are truly culpable for this murder off the hook; in other words that we have misled or are misleading, and therefore perverting, the course of justice.

He is accusing lawyers appearing for the family, and by extension and necessary implication, the family itself, of having motivations, other than the pursuit of truth and justice in their conduct in this case.

He is accusing prosecutors, police investigators and magistrates of misconduct intended to wrongfully convict Yorgen Fenech and in the process allow the real perpetrators of the crime to enjoy impunity.

His writing is careful. That’s not in the extent of the damage it may cause to others, never mind to the cause of truth and justice, but in the extent of the potential damage to himself. That suggests that he is not only using his skills as a historian when he writes but that the authorship is crafted to dance on the edge of legal safety for himself. It does not matter to me if he writes his own stuff. He signs it and he is responsible for it, even if what it is he is practically doing is allowing himself, his academic credentials and his professional standing to be used by a person accused of murder and his legal team.

In a conversation with his own conscience he will not be able to plead that someone else wrote the stuff for him.

So, then, this is not about what the targets of his lies, or if he prefers, his alternative facts, might do in reaction to him. Courts may find him in contempt and individuals may sue him for defamation.

But there are consequences he may or may not be aware of. I rather suspect he is.

When he focuses his cross hairs on the prosecutor he justifies the fear of many public officials of living up to their duty: the fear, unexplained but understood, we saw so much of during the Daphne public inquiry. The same applies to cross hairs aimed at activists, journalists, police investigators, lawyers and magistrates. And, though it has not happened yet for practical reasons, we must expect the same behaviour with respect to trial judges, jurors and so on.

They may not say so aloud or all the time but if Keith Arnaud, Kurt Zahra, Rachel Montebello, Philip Galea Farrugia, Jason Azzopardi, Therese Comodini Cachia, the Caruana Galizia family, Jacob Borg, Caroline Muscat, Ivan Martin and others, do not sometimes pause in frozen horror at the realisation that one day a mafia boss and his clan might blame them for time spent in prison or the exile from political power or the loss of hundreds of millions of the proceeds from interrupted crimes, then they’re less smart than they look.

Right now, Simon Mercieca has none of those concerns.

I have been sued by Raphael Vassallo for saying something similar to what I’m about to say and the question is still outstanding in front of a court. I’ll say it again a hundred times over about Simon Mercieca.

His writings are delivering in a constant stream of reasonably well written consciousness, the fear inflicted on the institutions and the citizens of a country possessed by the mafia. Yorgen Fenech is charged with murder but if we had the proper laws of a country that understands what the mafia is and what laws one needs to stop it, Yorgen Fenech would be undergoing a mafia trial in a bunker somewhere underground several thousand miles from here.

The killing of Daphne would be termed under Italian law as a terrorist act of a mafia character. Yorgen Fenech’s friendships with Joseph Muscat, Keith Schembri and Melvyn Theuma would be described as a mafia association. The Electrogas deal would be understood as an act of mafia in a public contract.

The people seeking justice in this would have the utmost protection by the state. They would be fully aware of the risk to their personal safety but in reasonable expectation that the state would see to it that that risk is managed as well as can be.

And what Simon Mercieca is writing and what he is doing would, in a country that wants to defeat the mafia, be understood for what it is: an act of omertà mafiosa. Simon Mercieca would then be understood to be carrying the messages of intimidation that his boss wants to deliver to the people facing him off. Simon Mercirca would be seen as warning off this case those who are working for his boss’s conviction. He would be seen as carrying his boss’s efforts to intimidate journalists, activists, police investigators, magistrates, other academics, trial judges and jurors that are yet to be chosen.

Speaking for the mafia makes you a mafioso, Simon Mercieca. You’re probably in too far in this Faustian pact you have signed with your reputation, such as it is, whether for money, or for what you must think in the context of your humdrum existence as prestige, or for a perverse and contrary pleasure of embracing what you know to be wrong, in the same vein that you use your TV slots to deny science like it went out of fashion.

I’m not the enforcer of Faustian pacts but I’ve read enough literature and history to know they all end in tears. When and if you succeed to frustrate justice in this worst case of injustice ever experienced in the modern history of this country, when your boss walks free, you’ll still have to give account to your conscience.

I suggest you bring out that long spoon.